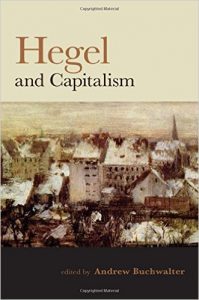 Negri once paid ‘homage’ to Hegel by calling upon Marxists to ‘liberate our praxis’ from an ‘ideology that desires the exploitation of man,’ yet speaks of the ‘hope of liberation’ (2011, 44). But even if his treatment of civil society does not cut as deeply as Marx’s critique of capitalism, conferring upon Hegel the title of official ‘philosopher of the bourgeois and capitalist organization of labor’ is a caricature (ibid., 37). Before we bury the ‘dead dog’ Marx himself tried to resuscitate, Marxists should pause to consult the more measured criticisms and nuanced appraisals of Hegel’s economics in the Buchwalter-edited Hegel and Capitalism. Within the confines of this review, I cannot do justice to the diversity of views expressed there, but I hope to highlight themes relevant to Marxist readers not yet ready to cast Hegel onto the dustbin of history.

Hegel’s relationship to capitalism is contested throughout the text. The opinions range from Michael J. Thompson ─ who argues that capitalism represents a ‘deficient modernity’ and individuals have no ‘obligation’ to reaffirm its irrationality (128-9) ─ to Richard Dien Winfield ─ who criticizes those that read Hegel as having problematized the ‘ethical standing of economic relations’ and drawn ‘modernity under suspicion’ (133, 143). However, most of the authors are in agreement that, while Hegel afforded a certain justification to the market as a sphere in which subjectivity is first raised into universality, he rejected the pure particularity of unbridled capitalism. His political philosophy envisions some sort of ‘determinate negation of capitalism’ ─ although, as Nathan Ross notes, this turns upon comprehending the precise meaning of the claim that the ‘state is the sublation of civil society’ (165). Nicholas Mowad goes so far as to suggest that if ‘Hegel felt capitalism to be severely flawed, yet still legitimate’ in a modified form, then he must not have been ‘fully aware of the critique of capitalism contained in his work’ (71). Perhaps, as Michalis Skomvoulis questions, Lukács was right: ‘frightened’ by his critique, Hegel ‘retreated’ (23).

Skomvoulis’ opening essay shows that while Hegel’s initial encounter with economics led him to repudiate Fichte’s Closed Commercial State by acknowledging the positive contributions of ‘civil society,’ he simultaneously turned away from the ‘methodological individualism’ of the economists, recognizing that the ossification of extreme inequalities and ‘alienating character’ of labour are insoluble from their one-sided standpoint (23, 27, 29). Exploring this connection between Fichte and the early Hegel’s economics, Kohei Saito explains that Fichte’s ‘transcendental theory of recognition’ thereby undergoes a concretization in Hegel which ‘historicizes recognition of the “person” in the context of market relations’ and, yet, also ‘perceive[s] the limit of this abstract recognition’ (40-2). The recognition engendered by civil society ‘extends beyond’ the narrow scope of the family, but that did not prevent Hegel from also highlighting that this ‘abstract equality’ produces a ‘real inequality’ which threatens the ethical life (43-4). Left to themselves, markets create a pauperized ‘rabble’ unable to actualize what C.J. Pereira Di Salvo calls the ‘promise of modernity’ (114) ─ outcastes of capital whom Ross refers to as outside the ‘culture of ethical life’ (167).

How would the rational State resolve this contradiction of capitalism, one which Hegel explicitly regarded as the most distressing of modern times? In ‘Hegel’s Torment’, Di Salvo stakes out an important claim by contrasting the Hegelian and Kantian approaches to the problem. Kant’s justification of private property was limited by the proviso that abject poverty is a violation of the ‘innate’ freedom of the person, leaving her in a heteronomous state of dependency. But he supposed that this could be easily remedied by ensuring a ‘minimum of property’ through ‘direct transfers’ from the State (106-7). However, Hegel does not define individuals as ‘persons’ simply by ‘virtue of their humanity’ (107-8). Kant’s proposed solution is therefore rejected because it does not recognize the nature of the problem. State-redistribution violates the ‘principle of civil society’ ─ where individuals become persons ─ and thus also fails to register that poverty consists of the ‘inability to realize their personality in the first place,’ or, what Di Salvo refers to as the discontent of a ‘socially frustrated personality‘ (110-1).

In ‘Two Ways of “Taming” the Market’, Lisa Herzog likewise notes that, for Hegel, such ‘forms of support for the poor’ take on a ‘humiliating character’ which undermines the realm of subjective freedom (152). This is why instead of depending solely upon ‘external state intervention,’ as Fichte does, Saito points to Hegel’s organic solution to unconstrained capitalism: viz., the ‘internal regulative praxis’ of corporate associations (46). This ‘unification of the workers enables them to appropriate the means of production collectively’ within the context of a socially, and not merely politically, regulated market (48). Di Salvo explains that by mediating State-assistance through these guilds, Hegel reasoned that members would be in a better position to ‘realize their individuality through labor’ (112). Hence, as Herzog emphasizes, not only by policing the economy through an ‘external order,’ but by empowering the craft-associations from within, Hegel argued that civil society could be integrated into a process of ‘Bildung‘ (education). Individuals could then freely shape their identities ‘through their work,’ elevating subjectivity into the precursory form of universality required for the coming-into-being of the ethical life (152-4).

Yet, considerable barriers stood in the way of this development according to Hegel. As Giorgio Cesarale observes, the division of labour, and consequent simplification of work, on one hand enables increased productivity and the expansion of needs, but, on the other, requires a ‘reduction of quality to quantity’ which ‘abstracts from the totality of social labour’ and ‘totality of the worker’s needs’ (88). This ‘development of abstract labor,’ culminating in the ‘mechanization of labor,’ is therefore accompanied by the ‘new figure of subjectivity’ required to ‘“sustain” mechanical labor’ (93, 96). The ‘domination of this abstraction over the production process makes labor increasingly mechanical,’ leading to a dialectical reversion to the category of ‘mechanism’ (90). For those unacquainted with the labyrinth of the Logic, I suggest that Cesarale’s insightful commentary be read alongside ‘Hegel’s Logical Critique of Capitalism’, where Ross offers a thorough treatment of ‘mechanism’. By re-reading the Philosophy of Right through the relevant section from the Logic, Ross demonstrates that Hegel’s presentation of ‘mechanism‘ highlights the ‘ethical untenability of unmediated capitalism’ (164-5).

Mechanism, as a category applied to economics and not merely physics, involves what Hegel characterized as the dead objectivity of a ‘system of atomism’ (167). The blind necessity of market inter-dependencies produces a form of reification where relations confront relata as impersonal laws, reducing civil society to what Skomvoulis calls the merely ‘inorganic moment of the ethical‘ (29-30). These accounts of abstraction, reification, and autonomization by Cesarale, Ross, and others throughout Hegel and Capitalism can be supplemented further by Tony Smith’s essay on Marx’s ‘homology thesis.’ Marx drew a parallel between his characterization of the ‘metaphysical perversity’ of Hegelian idealism, and the real inversion between subject and predicate in wage-labour. While his portrayal of Hegel’s theory was inaccurate, Smith argues that it accurately captures a perverse reality where capital confronts individuals as an autonomous and alien power, appearing as an ‘automatic subject’ and ‘self-moving substance’ (187).

Taken as a whole, Hegel and Capitalism paints the picture of a Hegel concerned with what Ross calls the determinate negation of laissez-faire capitalism. The form which that sublation assumes in his political philosophy is certainly debatable, but one thing is even more certain: the Hegelian State cannot be characterized, as Negri (2011, 38) suggests, as the political form of ‘capital in its necessary development’. Capitalism is ‘not homologous with the deepest principles of Hegel’s philosophy,’ though Smith shows that Marx was not ‘mistaken in thinking that Hegelian categories profoundly contribute to comprehending the social ontology of capitalism’ (191). This is why Marx also took up Hegel’s thoughts on the reduction of quality to quantity, criticizing the abstract form and mechanization of labour in a manner sometimes strikingly similar to his predecessor. Like Hegel, Marx offers us an organic explanation for the social atomism of capitalist society, where relations appear external to the individuals who compose them. Moreover, his conception of the universally developed individual of socialism is a critical appropriation of the Hegelian notion of the ‘educated man’ of ethical life, and, following Hegel, Marx posited this as the final product of labour working through its own estrangement.

To be sure, Marx’s critique of capitalism goes beyond Hegel’s critique of civil society. Although he recognized the positive elements developing within this dialectic of negativity, his attitude toward the contradictory character of capitalism is not ambiguous. There is little ambivalence as to what the ‘determinate negation’ means for Marx because he was not ‘frightened’ by his critique. Yet, even if, as Mowad argues, Hegel was unaware of its full implications, we today can at least unpack his ‘hidden critique’ of capitalism (71, 82). Marx’s ‘homology thesis,’ however mistaken, can be seen as the first step toward unveiling that submerged criticism because it tries to apply Hegelian categories to the logic of capitalism. The themes explored and questions raised by Hegel and Capitalism therefore challenge us to rethink Hegel’s complicated relationship to capitalism in a more nuanced fashion than Negri. As we approach the bicentennial of his Heidelberg lectures on economics, Marxists should reconsider the significance of that ‘dead dog’ as an economist and as a critic of political economy ─ even if his most essential insights point past the limits he sometimes refused to trespass.