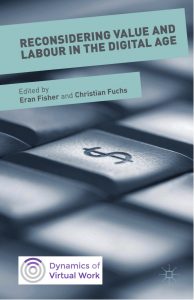 Vladimir Rizov is doing a PhD in Sociology at the University of York, UK. His PhD focuses on the …

Eran Fisher and Christian Fuchs have edited a rich and varied collection of contemporary work on value and labour in the digital age. It features 15 different writers on value, labour, class, rent, and productivity and consists of 14 chapters overall. Reconsidering Value and Labour in the Digital Age is the second book published in the series Dynamics of Virtual Work edited by Ursula Huws and Rosalind Gill. It provides a comprehensive and informative account of contemporary Marxist work on labour and value in the context of the digital. The book is organized in 5 parts, most consisting of 3 articles, with the exception of Part II. Being situated in the international research network of Dynamics of Virtual Work Action, experts on topics of ‘digital’ and ‘virtual’ labour from a variety of perspectives have gathered together in this collection. Labour and class, labour in the context of internet users, rent and the commons in the case of the digital, as well as issues of productivity in contemporary digital forms of capitalism, are all discussed.

In the first part, titled Foundations, the editors Fisher and Fuchs provide an introductory essay on the relevance of value and labour in the digital age. In it, the key concepts to the book are introduced and the following chapters are described. Both editors rely on their previous, well-established work in order to argue for the relevance of Marxist approaches to the digital in order to address the concrete forms taken by labour and value in contemporary digital space. In the second chapter, Fuchs provides a more in-depth contextualisation of the relevant concepts to the ‘age of Facebook, YouTube, Twitter, and Weibo’ (26). In particular, the concepts of time (Part II), productive labour (part III), rent (Part IV), and fetishism (Part V) are introduced and defended for their importance. Fuchs insightfully discusses the political, economical, and social dimensions of online space and finishes the chapter provocatively by arguing for the power of the user. In the last chapter from Part I, Sandoval argues for an inclusive approach to cultural labour. She critically challenges the distinctions between material and ideal labour, and their manifestation through technology. Most importantly, she asserts that “the transcendence of exploitation and alienation is … not a result of ‘techno-scientific development’ alone …, but requires social struggles” (55).

The second part focuses on Labour and Class. The two chapters are written by Lund and Xia. Lund provides a comprehensive contribution to the discussion of ‘playbour’. He traces the concept of both labour and play, in Marxism and psychology respectively. Lund draws on a variety of sources and studies on the topic to provide a balanced and critical argument where playbour is seen as erroneous. According to Lund, play and labour are opposites to each other. However, he does propose a new term, ‘gamebour’, and emphasises that a peer-level concept of production, ‘playwork’, may be potentially emancipatory. In the second article in Part II, Xia provides a particular account of class in China. Furthermore, she highlights issues of exhaustion and capitalism’s mechanics of exploitation resulting in high levels of job insecurity. The working conditions of internet workers in China include high work loads, high intensity, low security, limited autonomy – all, according to Xia, due to exploitation by ‘the bureaucratic capitalist class’ (94).

In part III, the focus is on The Labour of Internet Users. In chapter 6, Nixon highlights the oversight of discussions of digital labour, the case being that audience labour is often neglected. In order to acknowledge this fully, Nixon provides an account of audience labour as part of the political economy of communication, as well as specifying it as (signification through consumption’ (103). Overall, Nixon does well to outline the ways in which audience labour is exploited. Fisher, in chapter 7, continues the use of audience labour theory and applies to Facebook’s Sponsored Stories. He highlights the ways in which personal information becomes commodified into an advertising plan. Furthermore, Fisher concludes with an intriguing point concerning the dialectical tension between the potential of issues of information that he discusses: further commodification on the one hand, or a move towards the Commons on the other. In the final chapter of Part III, Na continues the topic of advertising on social media. She demonstrates clearly the treatment of users of Chinese social media platforms, such as Weibo, Youku, and Renren, for the purposes of profit through advertising. She highlights claims of ‘free access’, particularly in Sina Weibo’s official website, as forms of obscuration of the exploitation of user labour. Furthermore, she situates her argument in a discussion of ideology in Marx. She reaches the conclusion that, considering the definition of ideology ‘as the concealment of contradictions that are immanent in social relations’ (148), claims of ‘free’ media fulfil the same purpose.

The topic of interest in Part IV of the collection is Rent and the Commons. In chapter 9, Allmer, Sevignani and Amon Prodnik write about approaches to user participation and digital labour from a critical perspective. Almer et al. aim to critically challenge ‘celebratory’ approaches (153) from the very beginning of their text. They argue that work on concepts such as ‘peer production, prosumption, produsage, and crowdsourcing’ (154) obscure the dynamics of digital labour, making it difficult to distinguish between commons-focused work and labour that is being exploited for profit. By outlining both critical and celebratory approaches, in addition to highlighting the significance of advertising to the field, Allmer et al. define contemporary internet space as ‘both a social medium and a new space of capitalist accumulation with ideological tendencies’ (168). Chapter 10 continues the discussion of the concept of rent; Olivier Fraysse frames rent as a metaphor and tracks its use in descriptions of wealth appropriation on the internet. Additionally, Fraysse discusses the historical use of rent as metaphor, as well as situating it in a Marxist framework, and subsequently reapplies it to cyberspace. Overall, Fraysse demonstrates the relevance of the concept of rent in the context of the internet, both in relation to the commons as in the sense of shared resources and as ‘power to demand free labour’ (185). In the final chapter of part IV, Rigi provides a critique of the work of Hardt and Negri. He does not offer a comprehensive critique on the entirety of their work, but focuses on their claim that ‘the Marxian law of value is passé’ (188). At the centre of Rigi’s argument is his claim that ‘without the prevalence of the law of value capitalism will cease to exist’ (202). However, Rigi claims that while automation of production and commodification of knowledge as information undermines significantly the law of value, the global economy still operates in the space of the law of the value.

Part V focuses on Productivity in Reproduction. The first article (chapter 12) provides a Marxist feminist perspective on the value of consumer labour. Here, Jarrett problematises the value produced by consumers as both economic and cultural; in this sense, it produces ‘material use-values that build sociality and subjectivity’ (219), but also it reproduces ‘the normativity of capitalist structures’ (219). In chapter 13, Fumagalli discusses subsumption of labour to capital. He provides an account of cognitive capitalism in the context of contemporary capitalism ‘increasingly involving bare vital faculties of human beings’ (225), in the sense of biocapitalism and bioeconomy as well. In his discussion of life subsumption he describes the exploitation of subjective individuality (be it ‘gender, race, education, character, experience, etc.’ (237)) and its two dispositifs: social subjugation and enslavement. In the last chapter, Pitts continues the discussion of the theory of value in the context of productive and non-productive labour. Here, Pitts challenges the distinction between the two kinds of labour. According to him, there is no clear difference in terms of the doing of the labour. However, the difference can be seen in the ‘success or failure to sell or exchange the particular commodity it renders’ (258).

Overall, the book provides a comprehensive collection of writing on labour and value in the context of the digital. The articles are current and varied; there is a good balance of empirical and theoretical work. Marxist theory is ever-present and it is continuously contextualised, and the authors engage with it fully. In summary, the book is an important contribution to the study of digital labour and its relation to value.