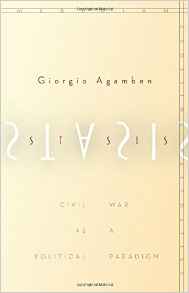 September 11th, 2001: New York City, USA. March 11th, 2004: Madrid, Spain. July 7th, 2005: London, England. November 13th, 2015: Paris, France. March 22nd, 2016: Brussels, Belgium. After more than a decade of Islamist terror attacks against the Western capitals, can the international war on terror still be theorized as a global civil war within the Western European world-system itself? This is the question posed by Giorgio Agamben’s Stasis: Civil War as a Political Paradigm, based upon ‘two seminars on civil war given at Princeton University’ (ix) shortly after the September 11th attacks. But Agamben does not really answer this question, since he restricts himself ‘to examining the topic [of civil war] as it appears within Western political thought…in the testimonies of philosophers and historians of Ancient Greece and in the thought of Thomas Hobbes’ (4). And it is also questionable whether this Western Eurocentric political theology is really capable of explaining the strangely foreign world-views and different motivations of the Muslim mujahideen terrorists and Islamist suicide bombers who clash with the Western States in the internecine civil war or sacrilegious unholy war of the contemporary international war on terror.

In the first section of Stasis, subtitled ‘Stasis,’ Agamben bases his theory upon Nicole Loraux’s ‘La guerre dans la famille,’ in which Loraux argues against the classical theory that in the Greek city-state (polis), as in Greek tragedy (e.g. Aeschylus’ Oresteia), civil war (Greek: stasis) emerges from the schismatic infighting and family feuding within the Greek household (oikos) (e.g., the bitter family feud, within the House of Atreus, between Atreus and Thyestes, Agamemnon, Menelaus, and Aegisthus, et al.), and is only subsequently sublimated, within the Greek polis, by the establishment of a sovereign rule of law (the foundation of the Athenian Areopagus) which brings the self-perpetuating cycle of familial violence to a stop. With and against Loraux, Agamben argues that there is really no distinction, in Greek political theory or Greek tragedy, between the civil war in the family (oikeios polemos) or in the polis (emphylios polemos) (8), but, instead, there is a ‘zone of indifference’ which serves as ‘the threshold of politicization and depoliticization’ in the Greek city-state (16). In this zone of indistinction, civil war is both sublimated and de-sublimated, in a constant state of frozen conflict which perpetually threatens to break out into outright civil war. The Western State, like the Greek polis, thus exists in a constant state of suspended civil war, which is only superficially resolved by the establishment of a sovereign rule of law and the declaration of a truce between the perpetually warring parties. This constant civil war, Agamben argues, is the basic condition of political life (Aristotle‘s to eu zen, ‘the good life,’ as opposed to ‘bare life,’ to zen) (12) in the Western State. But Agamben fails to recognize any significant distinction between the self-destructive violence of outright civil war—e.g., the Peloponnesian War, the Roman Social Wars, the English Civil War, the Spanish Civil War, the Bolshevik Russian Civil War, and so on—and the sublimated state of suspended warfare between, say, left- and right-wing political parties—Social Democrats and Christian Democrats, Socialists and Conservatives, Democrats and Republicans, etc.—in the Western State, which, however stultifying and repressive, is still probably preferable to the wholesale mass slaughter that erupts when that sublimated violence is abruptly de-sublimated, the sovereign state of law breaks down, and outright civil war breaks out.

In the second section of Stasis, subtitled ‘Leviathan and Behemoth,’ this constant state of civil war within the Western State is identified with the “war of all against all” (bellum omnium contra omnes) of classical political theory, which, in Hobbes’ Leviathan, is equated with “the state of nature” of primitive humankind, and is only superficially resolved by the sovereign’s imposition of a rule of law over the perpetually feuding factions. The Hobbesian sovereign, Agamben argues, does not obtain the right to rule by a social contract or a religious covenant with his citizens and subjects, but, instead, simply imposes his monopoly on violence upon the governed, whilst disguising sovereign violence behind the pretext of a democratic rule of law. The Hobbesian sovereign, then, is both within and above the law, cloaked with the sovereign immunity of his monopoly on violence and empowered to employ that violence against his citizens and subjects, who exist under the constant threat of violence and terror, as if they were all prospective criminals or potential terrorists. Critical readers of Agamben’s Homo Sacer series will recognize his analysis of “the state of exception,” by which the Western State—Periclean Athens, Augustan Rome, Puritan England, Nazi Germany, Socialist France, post-September 11th America, etc.—after declaring a state of martial law and suspending its constitution, is still able to sustain the façade of a democratic rule of law without observing the constitutional protections upon civil and human rights which might hinder the prosecution of its self-proclaimed civil war against its public enemies and political opponents. Agamben’s scathing analysis of this perpetual state of exception within the Western State clearly pertains to the political situation of the 1930s and 1940s, when the Western European States were constantly embroiled in the schismatic in-fighting between communism and fascism (e.g., between the Republican factions and Franco’s armies in The Spanish Civil War), or between left-wing and right-wing parties (e.g., between the Social Democrats and the National Socialists in Weimar Germany), which finally broke out in the wholesale global warfare of World War II. This constant state of civil war within the Western States continued through the Cold War, in the psychological warfare campaigns between the U.S. and the U.S.S.R. of the 1950s and 1960s, and arguably still exists in Western European politics, in Germany, France, or Italy, where there are still radical left- and right-wing parties (e.g., the French Communist Party and the National Front) engaged in the struggle for sovereign power. The state of exception also still exists in the post-September 11th America of the Patriot Act, Guantanamo Bay, the CIA black sites, and so on. But whether Agamben’s analysis of the global civil war within the Western States can still be applied to the “clash of civilizations” between Western Europe, Britain, America, and the Muslim world – that is, to the contemporary international war on terror – is a more difficult question which he doesn’t really answer.

Giorgio Agamben’s political theology emerged from the 1970s Italian “Years of Lead” (gli annii di piombo), which Antonio Negri, among others, has characterized as a chaotic period of constant civil war within and against the Italian State, in which both left-wing and right-wing factions carried out back-to-back terror attacks against each other, and against whoever happened to get caught in the crossfire between them. Agamben’s first published article, ‘On the Limits of Violence,‘ recently republished in Towards the Critique of Violence (ed. Brendan Moran and Carlo Salzani, London, Bloomsbury, 2015: 231-238), is, in fact, clearly marked by its violent origins in the Italian Years of Lead, since it identifies “revolutionary violence” against the Western State with the “sacred violence” of sacrificial religions, in which the self-sacrificial martyr (the anarchist terrorist, the suicide bomber) devotes her- or himself to self-destruction in the righteous cause of religious salvation or political liberation, without knowing precisely what she or he is sacrificing her, or himself, for. ‘Revolutionary violence,’ Agamben argues, ‘is a violence that negates the self [even] as it negates the other; it awakens a consciousness of the death of the self, even as it visits death upon the other’ (236), in a self-destructive act of self-sacrificial martyrdom which can only be called “revolutionary suicide.” Whether Agamben would still endorse these disturbing words, written in the 1970s Italy of the Red Brigades and the Italian National Fasces, of the Bologna train-station bombing and the Milanese terror attacks, in the 21st Century political context of the French Socialist government’s etat d’urgence and the Paris terror attacks, of the Islamic State jihadist bombings and the U.S.-sponsored international war on terror, is a question which might perturb the critical reader.

In the frantic, violent atmosphere of the Italian Years of Lead, it was often difficult to tell whether a specific terror attack (the Bologna train-station bombing, the Aldo Moro kidnapping, etc.) was actually carried out by a radical left-wing faction (The Red Brigades, Lotta Continua, etc.), by a radical right-wing faction (the European National Fasces, the Armed Revolutionary Nucleii, etc.), or by some sinister conspiratorial agent of the Western State (the Italian paramilitary police, the American CIA, the Soviet KCB, etc.), and equally difficult to tell if the complicity of the Western political parties (e.g., the Italian Communist Party) or the Western security police (the Italian carabinieri) in plotting a false flag attack was tantamount to criminal guilt in a cleverly disguised crime. But in the contemporary situation, it is considerably more difficult to discern the precise degree of criminal or moral guilt accrued by the plethora of parties who, to various extents, are responsible for the self-perpetuating cycle of escalating violence between the Western European States, Britain, America, and the Muslim world. It’s difficult to tell, in other words, whether culpable guilt can be attributed to the sovereign violence of the United States’ self-defeating over-reaction to the September 11th terror attacks, or whether the current self-perpetuating cycle of escalating violence is not equally attributable to a certain self-destructive violence within the Muslim world itself, which is evident in the perpetual un-civil war or sacrilegious un-holy war between the Saudis and Iran, Sunnis and Shiites, Persians and Arabs, and so on—a specifically Muslim civil war, which is susceptible of manipulation by the Western States, but is not strictly attributable to them, as Agamben‘s argument might suggest.

For Agamben, the sovereign violence of the Western State is itself responsible for the perpetual civil war of competing factions which characterizes Western politics; and that sovereign violence, Agamben suggests, will finally bring about its own catastrophic downfall, in an apocalyptic event which he compares, citing Hobbes’ Leviathan and Walter Benjamin’s Theological-Political Fragment, to the Armageddonite battle between Leviathan and Behemoth which must take place, according to Jewish and Christian eschatology, before the advent of the Kingdom of God (53-69). In Agamben’s political theology, this crypto-messianic revelation appears to be identified with the advent of the utopian anarchist state of his earlier work, The Coming Community. But whether Agamben’s political theology and Benjamin’s messianic theories can provide an adequate description of the terrorist warfare that currently rages between the Western European States, the Israeli Zionist State, the United States, the Islamic State, and the Muslim world – much less help to bring that ungodly, unholy war to an un-apocalyptic stop – is another question that isn’t really answered by Giorgio Agamben’s Stasis.