Marx & Philosophy Review of BooksReviews‘Why Save the Bankers? And Other Essays on Our Economic and Political Crisis’ reviewed by Hans G Despain 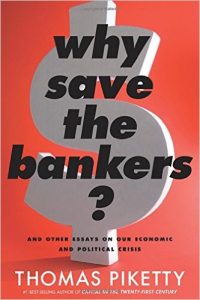 Thomas Piketty
Why Save the Bankers? And Other Essays on Our Economic and Political Crisis

Thomas Piketty is an important political economist attempting to nudge economic policy leftward. This should be applauded, appreciated, and scrutinized. Piketty is a regular contributor to the French newspaper Libération. His Libération essays are political and intended for a well-informed general audience. Why Save the Bankers? And Other Essays on Our Economic and Political Crisis is a collection of his popular press essays (Chronicles: On Our Troubled Times (Piketty 2016b) is the UK European version; it excludes 4, and adds 3 essays).

Piketty’s best-selling Capital in the Twenty-First Century (2014) will be a reference point of political and economic debates for several decades. The primary contribution of Piketty’s Capital is political. The essence of Why Save the Bankers? is radically political. These books complement each other well.

If you were disappointed by Piketty’s The Economics of Inequality (2015), don’t let that dissuade you from reading Why Save the Bankers?. The Economics of Inequality was merely a minor revision of 20-year-old text written by a twenty-something Thomas Piketty. Why Save the Bankers? was written by a much wiser political economist and, much like Paul Krugman, a public intellectual being politically radicalized, or at least traumatized, by historical events.

The economics of Piketty’s Capital are straight forward. Mature capitalist nations are entering an era of no or low growth. Owners of capital and financial assets achieve returns on capital between 4 – 5 percent for modest fortunes (€1 billion range), and 8 – 10 percent for more significant fortunes (€10 billon and above). These two phenomena generate serious dilemmas for contemporary capitalism. The low growth and high returns on capital empower previously accumulated wealth. For this reason, ceteris paribus, inequality will widen.

Curiously, the economics of stagnation, financial expropriation, inequality, and the ensuing economic instability and crises are merely a backdrop for Piketty (2014). His main focus, as stated above, is political. The widening inequality will cause political unrest.

Piketty’s policies would modestly increase growth and reduce financial wealth (Despain 2014). According to Piketty, if growth and tax policy is done correctly, inequality is lessened and financial markets are more stable. Political unrest is dampened, and capitalism saved.

These same themes dominate the 48 essays and the Preface in Why Save the Bankers?. As is also the case with his Capital, there is much to applaud and much to disparage. The book is divided into three sections. The essays in section one (pp. 17 – 72) were written from September 2008 to February 2010, and are mainly concerned with the aftermath of the Great Financial Recession and the work of central banks. The essays in section two (pp. 73 – 132) were written from March 2010 to July 2012. The main theme is the invasion of the US-generated financial crisis on the shores of Europe and the inability of Eurozone economists to successfully address the socioeconomic carnage. The essays in the book’s third section (pp. 133 – 209) were written from September 2012 to November 2015. They are mainly a series of pleas to restructure the Eurozone and European Union to avoid a disintegration of both alliances. These themes are sprinkled with commentary on the carbon tax, Stiglitz report, the Bettencourt affair, European elections, Hong Kong, ISIL, etc.

Piketty urges that “Financial crises are part and parcel of capitalism” (83). “Left to itself, capitalism, because it is profoundly unstable and inegalitarian, leads naturally to catastrophes” (61). His answer to the question that constitutes the book’s title is: given the reality of capitalism, “it’s legitimate to intervene to avert a systemic crisis” (23). Banks must be saved. However, the bailouts should involve stipulated conditions. First, shareholders and bank managers should “pay a price for their mistakes.” Second, aggressive financial regulation should be put in place so that toxic assets are not sold as financial investments. Third, executive compensation packages in the financial sector should no longer be allowed to be obscenely high.

In an essay from May 2009 (36 – 9), he defends the crucial role of central banks for guaranteeing solvency of the financial system. Central banks, he contends, work in the public interest. A year later, he asserts that “Central banks helped prevent a complete shutdown of credit and a collapse in prices and economic activity” (82). He argues that central banks should buy public debt in a similar way as they bought private debt during the crisis. This would help to avoid austerity and would also help to keep people employed.

By November 2010, Piketty can be found warning that the austerity policy throughout Europe has generated deflation, stagnation, and unemployment (93). In frustration, he complains of economists, financiers, and politicians who defended bank bailouts, even though the bankers caused the crisis. Now these same people hypocritically denounce bailouts of State debt, even though the financial crisis caused the public debt crisis. Economists worry that public debt bailouts will cause inflation, but Piketty insists that this is “a good deal of delusional thinking and intellectual confusion” (92).

Meanwhile in early 2010, banks across the globe were making record profits. The European Central Banks and US Fed had lent €2 trillion to banks at 0 to 1 percent interest. Banks could use this money to pay off debt that would have cost them 5 percent or more, or loan the money to businesses and households at rates of 5 percent or more. Either way, Piketty contends that 80 percent of the private banks’ profits were from the central banks’ actions. With no financial company paying for its mistakes, no significant new regulations, and no limit on financial executive compensation, it is reasonable and logical for citizens to “conclude that this whole episode is an economic absurdity” (67).

As central banks twiddled their thumbs, Portugal, Ireland (95 – 8), Italy (138 – 44), Greece (73 – 6, 102 – 4), and Spain (137 – 9) slid into the economic abyss, unemployment rose, tax revenue fell, unemployment and poverty spending increased, and public debt swelled. These countries carry the blame for what was caused by actions of private financiers and speculators (93).

For Piketty, the most serious threat seems to be the shattering of the Eurozone (122 – 29, 179 – 81) and European Union (xi – xii, 102 – 4). The management of the European crisis has been a disastrous folly. By “2013-14 growth has been practically zero in the Eurozone,” while US and UK had achieved growth (175). Piketty repeats throughout these essays that a single currency with eighteen different public debts, eighteen different tax and social systems, and eighteen different interest rates to speculate on, is an impossible situation.

The French and Germans seem to have forgotten that they both had public debt greater than 200 percent of GDP in 1945. With inflationary measures and debt forgiveness (202), by 1950 the debt had fallen below 30 percent of GDP (190).

France and Germany selfishly benefit from interest rates near zero percent and are “washing their hands” of the interest rates above 5 percent imposed on southern Europe. The selfishness is generating a deep economic crisis throughout Europe. The austerity measures imposed on the troubled European countries generates deflationary pressures (33, 194 – 6), and for “Merkozy/Merkhollande” (118/137) debt forgiveness is no alternative (201). Public debt swells, unemployment persists, and economies stagnate. Piketty believes the political reaction to these absurdities will be severe (137).

Let’s be clear about this absurdity. Public debt repayment is accomplished by (1) economic growth, (2) an increase in taxes, (3) inflation, or (4) cancellation. Eurozone-imposed austerity denies the first three, and with no political appetite for debt forgiveness all avenues for repayment are obstructed. “Through their shortsighted selfishness, Germany and France are mistreating southern Europe” (203) and are putting the Eurozone and European Union in jeopardy, along with the stability of the global economy.

The ECB austerity policy is turning European citizens against European integration (77 – 80). Piketty was surprised and alarmed by Brexit (Piketty 2016a). He insists the “truth is that the present European institutions are seriously dysfunctional” (Piketty 2016a). Europe needs serious deliberation concerning public debts, taxation, interest rates, and jobs. “For too long, these questions have been left” to financiers and politicians behind closed doors “with the results that we know. It is time for the citizens of Europe to take back their future” (2016a).

Piketty is not a straight forward Keynesian. This is because he does not believe mature capitalism can continue to grow at rates to sustain full employment, with or without aggregate demand management. Thus growth cannot save capitalism (157 – 60). Instead, “democracy must retake control of capitalism” (160). “What’s immobilizing Europe is mainly its antidemocratic straitjackets” (199). In short, imposed austerity against the will of citizens (33 – 5, 193 – 6).

High returns on capital necessarily mean the working class faces a double hardship. First, low growth means fewer jobs and lower wages. Second, the increase power of accumulated wealth has translated into a political shift toward the rentier class (197 – 200). The political shift has led to decreased taxes on the wealthy, and increased taxes on the working class (56 – 8).

The wealthy grew their fortunes with a healthy economy and “managed to take advantage of the financial chaos, buying up the good assets at the right time” (60). Post-crisis, banks are now bigger and more powerful than when they were ‘too big to fail’ (66 – 8). The policies implemented to save capitalism brought “about a reverse redistribution of wealth.” The wealthy got wealthier, the poor poorer (61).

Piketty is exactly correct to argue that capitalism left to itself “leads naturally to catastrophes” because its financial system is “profoundly unstable” and its system of distribution radically “inegalitarian” (61). Unless the left expands its control, Piketty predicts another financial crisis, soon (191). The political reaction from the next crisis could go either toward the left or toward far-right Nationalism (192).

Piketty doesn’t seem to understand that capitalism is radically undemocratic. Politically, Western citizens vote for their leaders. However, the workplace environment is radically totalitarian. Moreover, capitalism’s tendencies are to accumulate, concentrate and centralize economic wealth (Marx, Capital volume I, chapter 25) and usurp political power. To believe that somehow a policy will be implemented that euthanizes the obscene patrimonial class is naïve.

Piketty’s book does demonstrate his philosophical belief that mature capitalism generates stark injustices. It is surprising that Piketty believes social democratic policy can overcome the structural dynamics generating these injustices. Piketty’s Grand-liberalism is a mirage. Monopoly-finance capitalism is systemically inegalitarian and stagnation is its normal state .

Piketty clearly warns that the “risk” “toward oligarchy exists on every continent.” The “biggest fortunes grew at an average rate of 6 – 7 percent” from 1987 to 2013, while economic growth was 1 – 3 percent (172). It is not clear how the movement away from these tendencies could be achieved without an abandonment of capitalism. “Unfortunately, it seems that new crises are necessary for governments,” political economists and citizens, “to fully recognize” the dilemmas and contradictions of oligopoly capitalism (61). Unfortunately it will take another crisis and radically ‘undemocratic’ policies in reaction to it for Piketty to realize Grand-liberalism is a mirage, and that “capitalism is no alternative” .