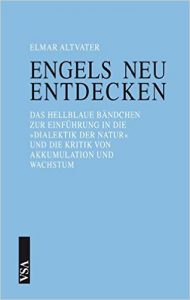 Palle Rasmussen is professor of education at Aalborg University, Denmark. Among his teaching is …

This is a book with many relevant and penetrating insights – but perhaps not quite the insights promised by the title and the blurb, which links Engels’ Dialectics of Nature with present-day criticism of growth and its consequences for the environment.

The author, Elmar Altvater, is a retired German professor of economics and political science. He was part of the revival of Western Marxism in Germany during the seventies and has continued to pursue a Marxist approach; but since the nineties he has combined it with interests in environmental economics and alternatives to capitalist growth.

The manuscript Dialectics of Nature was a result of Engels’ interest in the advancement of the sciences during the 19th century and his ambition to demonstrate how the historical materialism developed by Marx’s and himself could be applied to many different spheres of reality. During the 1870s he worked on elements of a book where he would summarise the achievements of different sciences and show that they could be explained and integrated in a dialectical approach drawing mainly on Hegel. Part of the material was used in Engels’ Anti-Dühring (published in 1877) but the manuscript remained unfinished and was only published in 1927 by the Marx-Engels Institute in Moscow. The manuscript had been in the possession of Eduard Bernstein, who had had doubts about its scientific value and asked for opinions from two experts. The first, Leon Arons, did not accord Engels’ work much value. The second expert was Albert Einstein, whose response was cautious. He did not find much of scientific value in the manuscript, but he suggested that publication might be merited because the text showed something about Engels’ intellectual development.

Altvater’s book consists of ten chapters. In addition it reprints the two texts from Dialectics of Nature that had been brought out by Bernstein before the publication of the whole manuscript: ‘Natural science in the spirit world’ and ‘The Part played by Labour in the Transition from Ape to Man’.

The first three chapters present Engels, his relation to Marx and his own work. The information is well known, most recently from Tristam Hunt’s book on Engels, but Altvater adds a discussion of later Marxist debates about Engels’ work.

Engels has been criticized for having a simple theory of knowledge, assuming that human consciousness ‘mirrors’ the external, material world. Defending Engels against this, Altvater quotes an 1890 letter from Engels where he commented on how actors of finance markets perceive the economy. Engels writes that they perceive the world upside down, seeing the finance markets as movers of industry and the world market, while the opposite is in fact true (13). So it seems that Engels was very much aware of Marx’s criticism of the capitalist form of fetishism. He also explicitly rejected the idea of using the ‘materialistic method’ as pre-defined template for historical developments (36).

In History and Class Consciousness (written before the publication of Engels’ full text) Georg Lukács objected to the basic idea, arguing that dialectics only applied to social, economic and political relationships and developments, but not to the development of nature. Dialectics manifest themselves in the societal totality (39f). Some later Marxist theorists (Altvater mentions especially Helmut Reichelt) portray capitalism as a system of production and circulation of exchange value, a completely social system with no natural elements. Luhmann’s systems theory makes the same mistake, because markets and exchange value are seen as part of the economic system, while concrete tools and products are not.

Altvater objects to these theoretical approaches, maintaining that nature contributes to and is transformed by societal development and that a totality approach must include the metabolism of man and nature. Production of interlinked exchange and use value is a process drawing on a changing nature. The capitalist system must always draw on energy from the outside or results of its entropy must be disposed of externally, in garbage lots, in the water or in the atmosphere. Capitalist production depends on the ‘external world’ of nature.

This does not mean that production and societal development can be conceptualised in the terms of natural science. Altvater mentions an interesting comment by Engels on this. In the fall of 1882 Marx asked Engels to comment on the work of Podolinski, a Russian socialist who attempted to develop an energy-based theory of value. In his reply to Marx, Engels recognized the ambition, but though that Podolinski mixed things up. ‘To try to express economic relationships in energetic measures is plainly impossible in my opinion’ (28).

The basic argument in the book is that Engels’s dialectical approach to nature anticipates later ecological and environmental approaches and concerns for the ways that accelerated economic growth threatens nature. Altvater argues that Engels recognized these risks and the necessity of developing insight in and respect for the dialectical processes of nature and its interaction with man and society. Ant there are in fact passages in Dialectics of Nature that suggest this. Engels writes ‘Let us not, however, flatter ourselves overmuch on account of our human victories over nature. For each such victory nature takes its revenge on us. Each victory, it is true, in the first place brings about the results we expected, but in the second and third places it has quite different, unforeseen effects which only too often cancel the first. The people who, in Mesopotamia, Greece, Asia Minor and elsewhere, destroyed the forests to obtain cultivable land, never dreamed that by removing along with the forests the collecting centres and reservoirs of moisture they were laying the basis for the present forlorn state of those countries’ (179).

While the first three chapters focus on Engels and his work, the rest of the book has a different character. The main content of these chapters is presentation and discussion of the historical development of the interaction between nature, economy and society, the increasing problems caused by unrestricted growth and the different approaches to these problems in economics and political science. Altvater gives a convincing account with many penetrating insights. He argues that the motor of capitalist economic growth is based on a combination of three main elements: the provision of fossil energy; the capital – labour relationship and the disembedding of markets and money from their societal conditions. In most recent times the liberalisation of international financial markets have taken the whole market for goods and labour ‘in tow’, they determine the direction of economic and societal development.

The so-called post-growth movement argues for the development of a ‘green’ capitalism framing ‘non-imperial’ lifestyles, reducing the use of resources, space and the strain on nature caused by garbage and by-products. But the movement does not consider the significance of the capitalist relationship for growth; it accepts the perspective of neo-classical economics where everything revolves around markets. In this perspective the ecological problem caused by economic growth can be countered by internalising the externalities, demanding that ‘prices speak the truth’ so that all direct and indirect costs are covered. However, the market mechanism can react on shortages, but it cannot escape the dialectics of nature and the depletion of resources. Altvater concludes that humanity invariably run into dead ends when the conditions for living in harmony with nature and for reproducing the total set of relationships between society and nature are not respected (121).

Altvater frequently includes comments referring to how Engels anticipated environmental issues and how his dialectical approach contributes to highlighting them. He refers for instance to ‘Engels’ thesis about the (multi-dimensional) interwoven character of natural, social and political processes, about their rise and demise’ (144) and quotes an article (published in 1895), where Engels argues that growth and expansion are a basic feature of capitalism and that limits to growth are the Achilles heel of capitalism (98). But it is significant that Engels does not refer to any natural limits. Even though Engels (like Marx) was clearly aware of environmental problems, they were not a strong theme in his writings. Dialectics of Nature was an attempt to integrate arguments and logics of different sciences through a dialectical approach, not to investigate the historical development and interaction of nature and society. Altvater actually writes this in his last chapter (154), but in this way he partly undermines the interpretation that he has argued for earlier in the book.