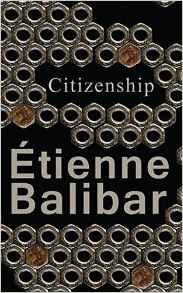 Darren Roso is a socialist activist based in Melbourne. His book Daniel Bensaid: From the Actuality …

According to Étienne Balibar, the word democracy ‘has been rendered completely banal, serving to encompass nearly all internal and external politics’ (120). He has a point. Neoliberalism has wreaked havoc on democratic institutions and collective politics. Financial markets have more power than citizens. European integration from above has become ever more authoritarian, fuelling virulent nationalism and the rise of Islamophobic parties. Barbarism toward refugees is being normalised in the name of security.

Balibar’s Citizenship, a collection of lectures from the last decade, grapples with these contemporary issues. He says that there is a continually resurfacing contradiction between citizenship and democracy. It is historical and ‘antinomic’, prone to crisis, and embodying constructive and destructive processes. In certain moments, he says, ‘the antinomy of citizenship becomes especially visible’ (4). Balibar examines the contradiction conceptually by adopting a ‘dialectical perspective’ (3) in critical dialogue with Aristotle, Spinoza, Marx, Rancière and Negri. In doing so, he seeks to link theory and practice.

It is a challenge to anyone that wants to think through the powers of collective politics. Activists and specialists alike should read this book.

Balibar’s conceptual procedure tackles this dialectic from different angles: the Athenian idea of the ‘constitution of citizenship’; equaliberty, a legacy of bourgeois revolutions with regard to citizenship in the nation-state; ‘Social citizenship’ in the European welfare state. Later, looking at the neoliberal ethos of individualism and privatization, he asks whether citizenship faces a mortal threat. Finally, he concludes with what he calls the ‘opposition between “de-democratization” and “democratization of democracy”’ as the source of help for citizenship (6), and seven propositions for ‘democratizing democracy’.

Citizenship sets itself an ambitious task. The crisis of liberalism makes it timely.

Balibar has longstanding interest in the themes presented. He was a member of the French Communist Party for two decades, and challenged the party leadership during the 1970s by defending the strategy of the dictatorship of the proletariat (Balibar 1976). Yet his Maoist-inspired critique contained ambiguities. He argued that smashing the capitalist state was necessary to transition towards a classless society. But he also wrote that there could be a peaceful, parliamentary road to socialism. The seizure of power could include armed uprisings, prolonged people’s wars or an electoral political victory. In the context of George Marchais’s vehement anti-immigrant bashing and the campaign by Robert Hue, a PCF mayor in Montigny-lès-Cormeilles, against Moroccans, Balibar also denounced the party leadership’s racism. Some years later, in Les Temps Modernes he wrote ‘Subject or Citizen? (For Equality)’. His call to ‘decolonize France’ of racism was infamous. This is relevant in situating Citizenship.

Balibar’s previous interests and theoretical ambiguities remain. The immigrant and the excluded form the backdrop of the work, but his former frame of reference – firmly situated within a historical form of Marxism – was destabilised. Citizenship forms part of an ensemble – with Violence and Civility and Egaliberté – of works that collect Balibar’s writings from his post-Marxist period. What makes Citizenship worth reading is Balibar’s continued commitment to class struggle and examination of the dialectic of insurrection and institution, which is embedded in the thirst for equality and liberty.

Balibar takes us through the Ancient Greek concept of politeia as a “constitution of citizenship” and pushes its limits. He is careful not to treat the concept ahistorically, while interrogating its contemporary relevance. On the one hand, the concept expressed the rotation of office for those with rights in the city. On the other was the organisation of governmental duties. For Balibar, ‘The politeia gave this conjunction effective form, although within certain extremely strict limits and contingent on massive exclusions’ (9). He uses politeia to found a conflictual picture of citizenship in contemporary Europe by overturning its anthropological foundation, where some are equal by nature and others are not. (Aristotle did not understand equality in the modern sense because Greek society was based upon slavery. Equality had not yet acquired solidity in common sense.)

The bourgeois revolutions introduced “equaliberty”, the concept of ’equal rights’. These rights ‘became a new kind of universal’ (30). The demand for equality and liberty, which is ‘at the root of modern universal citizenship’, is a demand that capitalism cannot satisfy (31). The class struggle plays a role in equaliberty: ‘It is a characteristic trait of modern citizenship, whose value is inextricably both ethical and political, that the rights of citizens are carried by individual subjects but conquered through social movements that are able to invent, in each circumstance, the appropriate forms and languages of solidarity’ (43).

Social citizenship emerged in the twentieth century through the linking of universal social rights and citizenship. But ‘the struggles which accompany demands for rights are simultaneously politicized and displaced, or inscribed into a dynamic of “displaced” class antagonism’ incorporating these rights into the ‘social-national state’ (47), the welfare state.

But the modern era is paradoxical. On one side, universal citizenship has been announced, and on the other, forms of internal exclusion persist. Balibar shows that both class and race exclusions arise from the dismantling of the social-national state by neoliberalism: everyone is being told to become their own entrepreneur while being stripped of the material possibility to be so. Though exclusion is complex, it condenses citizenship’s contemporary contradictions.

Balibar maintains that the dialectic of institutions and conflicts should remain open. There is ‘a complex relationship between the idea of exclusion and that of conflict. Many forms of exclusion can immediately spark conflict … to the extent that they give rise to resistance, demands for equality’ (85). But they can equally lead to a sense of powerlessness among the excluded.

Balibar’s insights into neoliberalism are scattered; borrowed yet sagacious. He restates Foucault’s notion of ‘governementality’ and identifies capital’s need ‘of invention, of another historical solution to the problem of adopting subjects to capitalism, of adjusting individual behaviour to the “politics of capital”’ (106). Neoliberal rationality demands that individuals moralize their own behaviour ‘by submitting it to the criteria of maximal utility or the future productivity of their individuality’ (111) where individuals are encouraged to ‘give their life the form of a business’ (112). Lacking collective solidarity, this rationality engenders hopelessness and extreme violence. It ‘explains the search for compensatory communities, which are often founded on an imaginary image of an all powerful collective’ (113).

Liberal democracies in Europe are witnessing an authoritarian turn in certain respects, with civil rights under attack. Balibar’s strength is to show the contradictory dynamic. Movements like the Indignados, the Arab uprisings, Occupy Wall Street and Nuit debout pay tribute to the antinomies of citizenship: ‘All of these movements, whether they are based on class condition or the contestation of other relationships of domination, are thus only “constituent” insofar as they are also “insurgent”’ (131). Only insurrection can bring citizenship into activity, he says. Insurrection is ‘always the search for … collective emancipation and the power that it bestows upon its participants – in contrast to established order, which tends to suppress this power’ (131). This is a fine declaration. But it remains ambiguous and overly formal throughout the work as a whole.

Overly abstract and vague, the book has some significant missteps. One striking example is Balibar’s resumption of Bernstein’s argument that the final goal of socialism, ‘whatever it may be, is nothing to me, the movement is everything’ (126). The thesis ‘was not without its similarities to the idea of a “permanent revolution” that Marx momentarily defended’ after the 1848 upheavals (idem). Bernstein ‘was a theorist of the transformation of the power struggle between the classes’ (idem). This Balibar even ties to Gramsci’s call for hegemony. This is not convincing. Bernstein saw Marx’s address of 1850 as Blanquist. He rejected Marx’s notion of permanent revolution. And Gramsci’s use of the term hegemony involved the movement and its evental moment. Insurrection wasn’t dissolved into the movement. This is antithetical to Bernstein’s argument, which cannot be tied to ‘permanent revolution’ or Gramsci’s notion of hegemony. Here, unfortunately, Balibar skips over history.

But in spite of its overly abstract mode of exposition the book is a genuine contribution to radical thought.