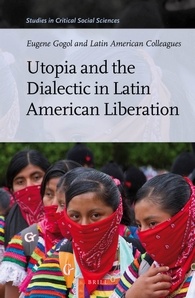 Eugene Gogol
Utopia and the Dialectic in Latin American Liberation

The key question driving Utopia and the Dialectic in Latin American Liberation is this: ‘[a]re there living threads which connect a concept of utopia found in many of today’s Latin American movements and the dialectic as found in Hegel, created anew in Marx, and by others?’ (4). In Parts 1 and 2 of the volume, Eugene Gogol approaches this question directly: first, he unveils ‘certain concepts of dialectical thought […] that can aid us in grasping the dialectic in Hegel as in life’ (28); second, he looks for ‘strands of the dialectic as they emerge from within Latin America itself’ (4). The result is impressive. In clear and unhurried prose, Gogol offers an erudite exploration of some complex theoretical ground, and then deftly applies it to a few instances of popular rebellion in the region.

In the first chapter Gogol begins by defining “utopia,” which he understands as ‘a historically rooted denunciation of the present that compels action toward a future new society’ (3). In other words, he is not interested in envisioning a perfect society that transcends the limitations of the present, but rather in ‘utopia as a space of social resistance’ (17). Beyond this, he is careful not to be overly specific when discussing utopian thinking. He is committed to allowing oppressed peoples to develop their own conceptions of both resistance and what it is meant to accomplish. ‘Concepts of utopia are not fixed,’ he asserts, ‘but changing over time: utopia as self-developing’ (19). There are no formulas or recipes to follow (28).

Having said that, Gogol is particularly attracted to non-European, indigenous versions of utopia: the ‘pre-Colombian, pre-Hispanic cosmos-visions of the original peoples of the Western Hemisphere, and the African peoples’ pre-enslavement memories and stories’, along with ‘the Indigenous peoples’ historic memory of resistance and rebellion post-Columbus, such as Túpac Amaru and Túpac Katari, as well as the history of Black revolt in the Americas, most especially in Haiti’ (16). Not surprisingly, in the empirical chapters he focuses on the Zapatista revolt in Chiapas, which began in 1994, led by the philosophically-minded Subcomandante Marcos, the massive indigenous mobilizations in Bolivia between 2000 and 2005, and the Haitian wars of independence of the 1790s and 1800s. Gogol briefly introduces each of these cases in the initial chapter before plunging into the theoretical discussion.

Chapter 2 is the longest in the book. There, Gogol tackles Hegel’s notion of the dialectic, followed by interpretations of this concept found in Marx, Lenin, and Raya Dunayevskaya. Yet, Gogol’s passion for Hegel is much more intense than for the later thinkers. The focus never veers too far away from the original Hegelian concepts. Unlike Marx and Lenin, who tore through Hegelian philosophy and ripped away whatever did not fit with their political goals, Gogol treats the Hegelian texts much as a scholastic monk might have approached the Scriptures. He is humble and careful to a fault, never daring to contradict the Master, instead digging deeper and deeper into the more arcane corners of his oeuvre in order to make it relevant to the contemporary world. Gogol understands Hegel not as the inventor of a theoretical method, but as having uncovered a fundamental truth, perhaps the fundamental truth, of human existence; ‘the dialectic is not only in the thought of a Hegel or a Marx, but is in life itself. In fact, life itself is the only ‘proof’ of the relevance for the dialectic today’ (58).

Like many Marxist intellectuals, Gogol is set on showing that Hegel himself was an advocate of real-world revolution, as opposed to an idealist who dealt mostly in abstractions. As Gogol is well aware, this is a controversial position that has produced its share of heated scholarly debate. To his credit, he spends little time railing against his intellectual opponents and swiftly gets to the business of enlisting Hegel to the cause of Latin American liberation. The idea is not to understand resistance movements through the Hegelian prism, but rather to incorporate Hegelian terms into the practice of resistance itself. Gogol quotes Venezuelan philosopher Álvaro Márquez-Fernández’s rejoinder to social movements of the need for ‘a philosophical orientation for their political practices’ (20). Even though, for Márquez-Fernández, this orientation must emerge ‘from the social base of the population,’ Gogol sees no contradiction in enlisting Hegel (and to a lesser degree Marx and the others) for the purpose.

Consider the concepts of “negation” and “negation of the negation”. Hegel, according to Gogol, believes that ‘humanity finds itself in a state of unfreedom, that is, in contradiction with its authentic self. If spirit is the becoming of freedom […] then negation becomes a key element of the Hegelian dialectic’. Negation, however, is not sufficient, since it does not help define the way towards authentic freedom. A “negation of the negation” is needed for ‘reaching a self- development of spirit, a fuller concept of freedom that is beyond one’s initial opposition’ (27-28). This, in Gogol’s view, is perfectly applicable to social movements in the material world. In 2000, the (mostly) indigenous inhabitants of the Bolivian city of Cochabamba rose up to protest the privatization of the local water supply, in what would come to be known as the “The Water War”. In the process of resisting privatization, the mobilized populace created a “Coordinadora”, a popular body to serve as the central locus of social action. The entity would have no leader, and it would function solely through and toward a “horizontal form of development” (19). Opposition to privatization was, in this case, the original negation that sparked the quest for liberation, while the Coordinadora was the negation of the negation, the arrow pointing the way forward.

In this fashion, Gogol connects the Hegelian categories of ‘universal, particular, and individual’ (29-33) to the slave rebellions in Haiti (chapter 4), the rise of Chavismo in Venezuela (chapter 5), Zapatismo in Mexico (chapter 6), and popular uprisings in Bolivia (chapter 7). He does this deftly, showing a profound knowledge of Hegel as well as a confident expertise in contemporary Latin American politics. Unlike many on the Left, Gogol is judicious enough not to glorify any and every movement that claims to oppose capitalism. Although he recognizes the prominent place the late Venezuelan president Hugo Chávez occupied in the global struggle against neoliberal domination, Gogol is also more than willing to criticize Chávez for his reliance on “extractive capitalism” as well as for his autocratic political style (95).

On the other hand, Gogol is sometimes guilty of oversimplifying reality so that it will fit into his framework. He claims, for example, that the United States ‘strove (and continues to strive) toward single power domination globally’ (95), without even commenting on the significant differences between American foreign policy under presidents George W. Bush and Barack Obama. He also neglects to even mention the most significant indigenous organization in the continent – CONAIE, the Ecuadorian confederation of indigenous organizations – which is more involved in institutional politics, and less prone to utopian exhortations, than its Mexican and Bolivian counterparts. He has little to say about the looming end of the “Pink Tide” of Left-wing governance in Latin America. For better or worse, the rise to power of leftist leaders in Venezuela, Bolivia, Ecuador, Brazil, and so on is inextricably linked with social mobilizations against neoliberalism. As Argentina falls once again under the control of the neoliberal Right, as Venezuela and Brazil sink deeper and deeper into crisis, as Bolivia’s indigenous president Evo Morales loses popular support, it is pertinent to ask whether the progress that has been made will be at all lasting.

Gogol calls for politicians and activists to recognize ‘the need for and the development of a philosophy of revolution in permanence for our day in the spirit of Marx’ (430). Yet, he neglects to address the failure of the utopian movements he so admires to translate their grass-roots visions of liberation into effective political action. He extolls the Water War in Cochabamba, but says nothing about the aftermath of the confrontation. As it turns out, a significant portion of the population in the area remained without proper access to water, even though community leaders took control of the local utility company. In 2005, one of the leaders of the protest movement told the New York Times ‘I would have to say we were not ready to build new alternatives’. Similarly, Gogol lists some encouraging developments in Zapatista-controlled territory, but no evidence that the lives of the people living there have improved since the original rebellion of 1994. Indeed, he quotes Subcomandante Marcos himself admitting to the stalling of the utopian spirit: ‘We defined the ‘no,’ we still haven’t fully delineated the ‘yes.’ […] This isn’t the only thing, as we also need more answers to the ‘how,’ ‘when,’ ‘with whom.’’ (122). In other words, after twenty years on the scene, the Zapatistas have yet to conceive of a workable negation to the negation.

Parts 3 and 4 serve mostly as illustrative addenda to the main discussion. Short chapters by several Latin American scholars on social movements in Argentina, on indigenous politics in parts of Mexico, on feminism, and on a handful of Latin American political theorists, add color and detail, but also muddle what starts out as a solid and straightforward framework. Gogol seems to find it unnecessary to work with these authors in order to connect their work with the central argument of the book. Several of the latter chapters barely mention Hegel, the dialectic, or utopia. Hence, in this second section the volume loses coherence and risks becoming yet another highlight reel of the successes of Left-leaning social movements in the increasingly distant past.