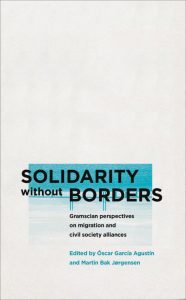 In the summer of 2015, more than 10,000 refugees and migrants – mostly from Syria – arrived in Germany on a daily basis. Welcoming committees sprung up across Germany and supported refugees with food, water and clothing. Meanwhile, more than 100, 000 people demonstrated in solidarity with refugees in London, U.K., on 12 September 2015 while thousands of activists have participated in aid convoys to Calais since. In Denmark activists helped refugees to cross over to Sweden without having to register with the police thus circumventing the temporarily defunct Dublin III border system.

Yet at the same time as we experienced a mass outpouring of solidarity with the very people who have been demonised by the mainstream media since 9/11 we have also had to bear witness to a dramatic rise in arson attacks and racist violence on refugees and their homes in Germany, and English football fans tossing coins at Syrian children during the Euro 2016. Most shockingly, the mayoral candidate and now mayor of Cologne, Germany, was nearly stabbed to death by a fascist for supporting refugees in the autumn of 2015 and British Labour MP Jo Cox was even murdered by a fascist for supporting the rights of migrants and refugees.

Largely written before these events had wholly unfolded, Agustín’s and Jørgensen’s edited volume Solidarity without Borders: Gramscian Perspectives on Migration and Civil Society takes these two divergent social trends as a starting point to deal with the question of migration, solidarity and civil society empirically, theoretically and historically. The book is divided into four parts with the first chapter of each part giving a theoretical exegesis. The first part deals with the heterogeneity of different political actors involved in civil society alliances. The second part deals with these solidarity alliances across and around borders. The third part deals with so-called misplaced alliances (which I will turn to later) and what the editors identify as the “crisis of solidarity”. The fourth part focuses on the spaces of resistance and the continuity between the anti-austerity mobilizations of 2011 and today’s solidarity movements with refugees.

The theoretical starting point of this collection and of most interest to the readers of this website is Gramsci’s short essay “Some considerations on the Southern Question” (1926). Here Gramsci outlines how the Turin communists placed the plight and demands of the Southern Italian peasantry squarely into their project of constructing a revolutionary and communist alternative in Italy during the Bienno Rosso, the two red years of 1920-1922. Both Apitzsch and Boothman are able to draw on their vast knowledge of Gramsci’s writings and of these historical circumstances, and they link the issues raised in the Southern question to contemporary phenomena such as the anti-racist struggles in 1970s Britain in their esssays. Unlike the contemporary trend to solely read Gramsci through Laclau and Mouffe, the authors in this collection make a unique theoretical contribution by drawing on Stuart Hall’s reading of Gramsci and read it as “travelling theory”, as Edward Said once did. The collection would have benefited from looking at the particular way in which Gramsci’s own history as a Sardinian migrant in Turin played into this particular insight. What Giuseppe Fiori (1971) once did autobiographically has unfortunately been lost on many researchers in more recent years.

For Gramsci, the question of alliances is primarily a question of a constructing an historical bloc. For Gramsci, this historical bloc consists of the industrial proletariat leading other urban strata and the Southern peasantry. The industrial proletariat attains a key role, as it is the only class that is able to construct an economic, political, cultural and social alternative to capitalism, unlike these other strata. The editors set the bar far lower than Gramsci did. Agustin and Jorgensen question Gramsci when they write: “Nowadays it is still unclear who the social and political actors involved should be” (5) and simply argue that the working class “must be included and be an active part of it” (9).

In the essays that follow differing answers to the question of who will construct the historical bloc are provided. Ronaldo Munck highlights the role of trade unions, for example. Boothman, on the other hand, describes and analyses the way in which Gramsci developed a role for different class fractions such as the non-proletarian strata in the urban space, to the intellectual strata, to the peasantry in the making of such an historical bloc. According to Boothman, these class fractions do not always attain clear organizational expressions. That is why Agustín and Jørgensen would have done well to be clearer that the working class in the Global North and trade unions are not synonymous. Those with trade union membership are only a class fraction of the working class as a whole, and the working class is continuously unmade and remade.

Interestingly, they argue that precarity serves as a common basis on which to construct this historical bloc (151). In other words, migrants become a proxy for the precarisation of society as a whole. This does not however mean that they lump together the precariat and immigrants as some unions have done in the wake of the crisis (229). Here they connect these two actors, acknowledging their differences, similarities and commonalities. This allows the authors to see im/migrants and refugees as agents of their own destiny, rather than as victims, a threat, a problem, or as criminals. This theoretical starting point is met far too infrequently when discussing the current situation. Neither do they argue for an integrationist/assimilationist position where the analytically distinct ‘other’ has to integrate itself into the ‘inside’. While they make passing reference to Brett Neilson and Sandro Mezzadra’s Border as Method a dialogue with those those adhering to the “autonomy of migration” unfortunately is lacking.

Yet their starting point guards them from falling into the trap of what Glick et al. have labelled ‘methodological nationalism’: treating the nation-state as the basic unit of analysis. In fact, they account for nationalism when they write about (the danger of) misplaced alliances. Nevertheless their Europeanist framework remains limited given that the world’s greatest migration and labour mobility are currently taking place within China and many efforts to build so-called civil society alliances (i.e. Justice for Janitors, Day without an Immigrant in 2006 etc.) have taken place in the United States over the last 20 years.

There has been much discussion of community-labour coalitions, international social movement unionism, coalition-building and community organising which has viewed migrants as central to rebuilding the labour movement over the course of the last ten years. The question is what contribution does this collection make to the field by concentrating on civil society alliances? Doesn’t the emphasis on civil society de-class these movements, and simply treat them as liberal phenomena?

Gramsci viewed civil society as the terrain of political struggles in the advanced capitalist societies of the West. Thus Agustín and Jørgensen pose it as a field of contestation in which solidaristic alliances and misplaced alliances battle for hegemony. Solidarity is the central theme and conceived as a practice in this volume. Solidarity is regarded as necessary as the authors argue that it “shatters the common sense and develop alternatives” (10). Here, solidarity and alliances are used interchangeably (10, 223). By using solidarity and alliances interchangeably they miss out on the organisational dynamics and processes of coalition and alliance-building, which is necessary if one is to learn from past experiences and create a knowledge transfer and production across borders. Arguably these alliances are frequently marked by paternalism. The relationship between solidarity and more paternalistic forms of empathy and charity remain under-analysed. The editors do draw out the way in which empathy and charity can objectively be regarded as solidarity given that the actions people engage in require a break with the nation-state and represent an immanent internationalist politics.

The book would have benefited from looking at solidarity as a two-way street. Refugees have shown solidarity with suffering local populations as well. In Berlin a Syrian refugee has set up a soup kitchen for homeless people and Syrian refugees in Fort Murray, Canada have brought aid and relief to those residents that lost their homes in the wildfires. It remains the task of further research to analyse solidarity and alliances between local populations, refugees and migrants under the auspices of power differentials, paternalism and the way the state uses solidarity to externalize the costs involved in providing welfare to citizens and foreigners alike.

One of the most interesting and insightful parts of the book is their discussion of misplaced alliances and the example of Danish construction workers and the rise of the Danish People’s Party. Augustín and Jørgensen argue that the discourse of ‘social dumping’ facilitates that Danish workers see immigrant workers as the enemy rather than pointing the finger at their bosses and capital. We can observer these misplaced alliances across Europe and North America: British Jobs for British workers, the crisis corporatism of unions in Germany, the Tea Party and Donald Trump. Agustin and Jorgensen are correct to argue that if civil society alliances and solidarity fail to materialise the rise of fascism can occur. The question of misplaced alliances needs to be put into the context of the economic roots of reformism, and the way in which the liberalisation of labour markets, different social and welfare reforms, and the shift of capital accumulation to finance facilitates the rise of misplaced alliances as it reconfigures national and popular sovereignty.

In conclusion this collection of essays is a valuable resource for all those studying migration, labour and social movements and civil society. One has a lot to gain from the profound theoretical and empirical insights that it offers. Despite the criticisms I raise it provides us with a starting point to seriously theorise and contextualise current pro-refugee and migrant movements using Marxist analytical categories. Agustín and Jørgensen’s note of optimism in the concluding chapter will resonate with the reader in light of recent political and economic developments which call forth what Gramsci once famously labelled “pessimism of the intellect”. This book does a tremendous job of unveiling some of the very contradictions that have emerged since the onset of the EU border crisis.