Marx & Philosophy Review of BooksReviews‘People Get Ready: The Fight against a Jobless Economy and a Citizenless Democracy’ reviewed by Hans G Despain 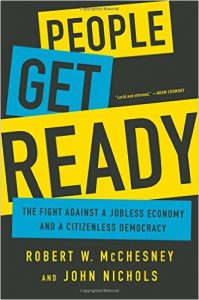 Robert Waterman McChesney
People Get Ready: The Fight against a Jobless Economy and a Citizenless Democracy

The current oligopolistic economic order is not sustainable. Corporations are too big, too powerful, and they are becoming more and more antagonistic to the well-being of individual human beings. The policy and structural changes needed for a more healthy political economy are beyond the countenance of today’s political and corporate leaders. To create structures that would lead us away from monopoly-finance capitalism would “take an army of aroused and informed citizens” (19).

Capitalism Is No Alternative (CINA). The processes of accumulation, concentration and centralization march on, making giant firms titans of economic wealth and political power. In 1950, the one hundred largest firms in the U.S. accounted for 26 percent of GDP. In 2013, the one hundred largest firms account for 43 percent of U.S. GDP (69). Average gross profit per employee increased from $44.50 in 1953, to $224.11 in 2013. Average revenue per employee increased from $189.93 to $1504.46 (285). Titan transnational firms are getting bigger, richer, more powerful, and less accountable to citizens.

McChesney and Nichols say loudly and emphatically that the present trends of monopoly-finance capitalism point toward greater centralization, persistent underemployment and amplified precariousness of workers, increased inequality and poverty (105), and to the intensification of the antidemocratic supply-chains of the corporate-planning system.

The battle against the oligopolistic global capitalism is being fought worldwide. The frontline of that battle is the United States. McChesney and Nichols focus their attention on this frontline battle. US citizens and workers are losing spectacularly, and are massively outflanked.

McChesney and Nichols have a threefold purpose in People Get Ready: The Fight Against a Jobless Economy and a Citizenless Democracy. First, they demonstrate that monopoly-finance capitalism has contradictory tendencies that generate undesired excess capacity, joblessness and underemployment, inequality, and instability, all of which are both unsustainable and unjustifiable. Second, there is a severe democratic deficit whereby citizens and workers are left out of social decision-making and of the political process. Third, they aim to show that there is a long, glorious progressive democratic tradition in the history of the United States that can inform action today.

The primary thrust of the book concerns how US citizens are “overwhelmed by propaganda” from a corporate dominated media and “victimized by” various forms of voter suppression (115). A credible democratic process requires a political infrastructure that establishes rules (e.g., one person/one vote, free elections, transparency, etc.) and institutions (e.g., civic education, new party formation, limits on money, etc.) that empower the weakest in society to be effectively politically equal to the wealthiest members of society (28-9). Today in the US, there has been severe deterioration of democratic infrastructure (151-208).

There is a serious question whether the political system that supports US monopoly-finance capitalism today is democratic. McChesney and Nichols insist that if it is democratic, it is a “citizenless democracy” (115-50). The shriveled political culture of today has politicians making promises to all citizens during the election process, but only delivering policy to corporate interests. For example, Obama, when he was a presidential candidate, denounced free-trade deals during the campaign of 2008, but later supported them as President (136-7).

“Nothing says ‘shut up and give up’ quite so effectively as a candidate who” champions interests during the election, but explains that “he cannot possibly deliver on the promise” once he is in office (139). Consequently, voter turnout in the US is dismal. The US ranks 120th among countries of the world for turnout of eligible voters (148). The US political system is rigged in favor of corporate and money interests. Low taxes on corporate profits and capital gains, anti-labor policy, and global trade deals rule American politics. As one US Senator, Sherrod Brown of Ohio, recognized, “our trade deals amount to corporate handouts and worker sellouts” (134).

The US corporate news media helps sell the illusion that elections accurately represent the will of the people rather than the will of corporations. “What coverage remains of politics and elections tends to be superficial and spoon-feeds the public what elites are saying” and what corporations want said (23). “So much money flows into campaigns, and the lobbying that polices the governments that extend from those campaigns, that each new election cycle sets new records for campaign fund-raising and expenditures” (141). The US election and political process is best captured by former US Senator Russ Fiengold’s description of “legalized bribery” (140). “If you want to see what democracy looks like, put Washington DC in your rearview mirror” (170).

Compounding the democratic deficit is joblessness and precarious workers. The Great Recession has aggravated and highlighted the problem of sluggish growth and economists across the country speak of the emerging era of “long-term secular stagnation” (45; Despain 2015a).Hidden unemployment is currently near 10 percent (48) and labor participation has fallen significantly (55-6). Job growth has been has been slow (49) and significant numbers of high and middle-income jobs have been replaced by low income jobs (51, 65-6).

Technological change and automation has been causing a ‘jobocalypse’ (95). Rather than innovation increasing the job skill requirements of the US labor force, it has generated massive deskilling, as was predicted by Marx and documented by Harry Braverman (305 n.89, 310 n.163). Lord Robert Sidelsky warns: “Technological progress is now eating up the better jobs, too” (104). Mass unemployment, at best mass under-employment, is becoming an endemic characteristic of monopoly-finance capitalism (20-1).

Technological unemployment and oligopolistic joblessness is very bad news for a capitalistic economy. The system needs workers with decent incomes as consumers. Without consumers, capitalists do not have an incentive to reinvest. The loss of good jobs is necessarily shrinking the consumer base and is part of the contradictions generating secular stagnation (102). When Titan firms cannot “successfully sell at a profit all that [they] can produce”, it “leads to stagnation, underinvestment, unemployment, and never-ending demands for austerity” (109).

McChesney and Nichols contend that technological unemployment is not inevitable (206-7). Rather, it is how titan corporations use technology and innovation to control the workforce and augment profits in monopoly-finance capitalism (11-2), whereby joblessness become endemic (3-5, 21-6). They contend that there needs to be a fundamental re-thinking of the relationship between monopoly-finance capitalism and democracy on the one hand, and a reconstitution between employment opportunities and those offered by the monopoly-finance-capital-dominated technology on the other (24).

These twinned employment and democratic deficits are generated by the macroeconomic dynamic of monopoly-finance capitalism. However, the “solutions to the employment and economic crises” need to be understood as political (114). In fact, similar political solutions have been forthcoming throughout US history.

When American colonists suffered under the injustices of the mercantile system, Thomas Jefferson contended that such injustices might be “sufficiently” powerful to “hoop together” the colonists enduring those injustices (213-4). Likewise, E. P. Thompson documents in his celebrated The Making of the English Working Class that injustices generated mass mobilization and a Jeffersonian ‘hooping together’ of oppressed classes (216-20).

The gilded age from the 1870s to the 1910s hooped together various conservative, liberal and radical interests such that the massive monopoly capital that Lenin described in his Imperialism, the Highest Stage of Capitalism were put on the defensive. The financial and economic crises caused by monopoly capitalism were confronted with progressive policies in the 1910s and again in the 1930s.

The financial and economic crises caused by monopoly-finance capitalism today scream for a progressive response. McChesney and Nichols believe that the unsustainable circumstances of monopoly-finance capitalism, along with widespread insecurity, personal anxieties, worker precariousness, and ubiquitous suffering, has generated the conditions for a “transformational” moment that can be the basis for an economic and political revolution.

However, the revolution could be conservatively geared toward corporate fascism (34-42) and suppression of “excess democracy” (198-206) or towards an extension of working class democracy (245-76). In the United States the candidacy of Bernie Sanders represents the latter (241-2), while that of Donald Trump the former (note: the name Donald Trump is conspicuously not mentioned once in the book).

The movements in US politics regarding the “fight for fifteen” (i.e. for a minimum wage increase), health-care battles, the cooperative movements, efforts to nationalize the banks, environmentalist, student loan justice, civil rights and “black-lives-matter,” money-out-of-politics movements, campaign finance reform, and Ralph Nader-inspired anti-corporation sentiment, are the basis of the extension of democracy (234-40). “Education is where the major battle for the future is going on today” (251).

McChesney and Nichols do not have a pat agenda, but are rather more suggestive. They find inspiration in the “Four Freedoms” proposal (174-6) and in the “Economic Bill of Rights” both proposed by Franklin Roosevelt (176-183) which aimed to guarantee meaningful work and income, healthcare, education, housing, food, clothing, leisure activities, social security, and freedom from the private abuses of private monopolies (254). Today, one could add the green movement and the Economic Bill of Rights, which are remarkably topical.

WWII and then the Cold War politically undermined Roosevelt’s “Four Freedoms” and “Economic Bill of Rights.” The “Economic Bill of Rights” did play a major role in the “Universal Declaration of Human Rights” in 1948 (182), and was embraced by Martin Luther King Jr. and A. Philip Randolph in their drafting of the “Freedom Budget” in 1966 (187; Despain 2015b).

McChesney and Nichols propose that we democratize the constitution, democratize journalism, and limit the power, reach and scope of oligopolies. They contend that planning needs to be a larger part of how the economy is organized and that democracy needs to be extended to the workplace. These proposals are not necessarily offered as a playbook for policy, but for organizing our thinking toward a type of Blochian ‘not yet-ism.’ Capitalism Is No Alternative (CINA).

We remain in an employment crisis and a reoccurrence of the great financial crisis is likely. Political frustrations and civic cynicism are high. The illustration of the range of historically-inspired possibilities offered by McChesney and Nichols is important for any hope to limit the power of transnational titan oligopolies, to protect the environment, extend democracy, and improve the quality of life for everyone. People Get Ready!