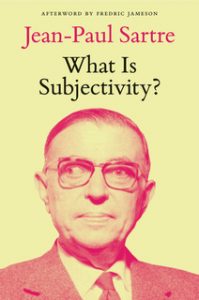 Jean-Paul Sartre
What Is Subjectivity?

All I want out of the future, what ever there is, is to be read.—Jean-Paul Sartre

It seems that Sartre may get his wish. A new book of his has just been published. What is Subjectivity? centers around a lecture Sartre gave at the Gramsci Institute in 1962, shortly after publishing the first volume of his Critique of Dialectical Reason. The new book is made up of four texts: an editor’s Introduction, Sartre’s thirty-page lecture entitled Marxism and Subjectivity, exchanges with many of the leading philosophers of the Italian Communist Party, and an afterword by Fredrick Jameson.

Sartre seems to have felt that the PCI philosophers were more open to his ideas than were those of the French Communist Party. The section of the book containing the exchanges between Sartre and the Italian philosophers, following Sartre’s lecture, is longer and perhaps more interesting than the lecture itself, as it does not seem to offer any new philosophical ideas about the nature of subjectivity. For Sartre, subjectivity refers to lived experience. It is a moment within what he calls the process of totalization. Thus, by subjectivity, Sartre was not referring to the psychological individual. He argued that men and women produce the social reality we call “society.” They become the products of their activity, and they face the practico-inert of social institutions, which limits their freedom. However, most of the examples he gives to illustrate the concept are not very interesting. As a result, Sartre’s lecture would not be worth reading if it were not for the exchanges between Sartre and the Italian philosophers, as well as Fredrick Jameson’s discussion of why Sartre’s major works still merit a careful reading. I think that Jameson’s afterword should be read in conjunction with his forewords to the two volumes of The Critique of Dialectical Reason, also published by Verso.

The Critique of Dialectical Reason, published in France in 1960, was written as an attempt to influence the intellectuals of the French Communist Party, as well as a broader reading public. However, it was not until May of 1968 that the first volume of the Critique of Dialectical Reason was widely read in France. An English translation was not made available until 1976. The second volume of the Critique of Dialectical Reason was never completed. Instead of finishing it, Sartre returned to working on his biography of Flaubert, entitled The Family Idiot, which can be understood as a concrete articulation of his concept of subjectivity. In this study, he makes clear what an existential Marxist social analysis should look like. The book published in the United States as Search for a Method was included as part of the French edition of The Critique of Dialectical Reason. Search for a Method can serve as a preface to both The Critique of Dialectical Reason, as well as Sartre’s several-volume study of Flaubert. It provides an introduction to a dialectical analysis of the relationship between individual and group praxis. Sartre’s primary task in this book was to defend Existentialism against Marxist critics like Georg Lukács. He suggested that Marxism was a philosophy that expressed the basic philosophical conception of capitalism, and that Existentialism was an ideology which existed within the framework of Marxism, and articulated the reality of the individual as a mode of being in the world.

Sartre’s lecture at the Gramsci Institute can be understood as an argument against Lukács’s concept of “totality, ” most clearly articulated in his essay What is Orthodox Marxism? Sartre considered Lukács’s use of the concept of “totality” to be an example of reification; he preferred the concept of “totalization”, which articulates human history as a process of change through individual and group praxis. In 1948, Lukács had published a highly polemical attack on Existentialism called Existentialism or Marxism. The meaning of subjectivity was at the center of the dispute between Sartre and Lukács.

In the debate with his Marxist critics, Sartre attempted to formulate the grounds for the comprehension of society in relation to the totalizing projects of both individuals and groups. In his attempt to formulate the dialectics of individual and group praxis, he elaborated a theory of human subjectivity. Sartre’s conception of subjectivity articulated a theory of mediation as he attempted to analyze the relationship between individual and group praxis. For Sartre, capitalist society was defined by both possibility and by the forces and structures limiting freedom.

In opposition to the theoretical formulation of society as the “field of the given,” Sartre posited human freedom as the need to go beyond the facticity of reified institutions and the social relations of scarcity. In this context, he understood need as lack and he argued that human praxis attempts to surpass the given reality of social life.

According to this formulation, society is presented as contradiction and struggle. In terms of Sartre’s notion of praxis, both individuals and groups struggled against the objective restraints upon freedom. Sartre posited society as the product of human praxis. Men and women both produce and are produced by their activity. Totalization for Sartre describes the struggle between human beings and the reified world of the practico-inert . In other words, men and women both exteriorize interiority and interiorize exteriority.

Sartre attempted to integrate the approaches of psychoanalysis, sociology, and existentialism within the theoretical framework of Marxism. He attempted to incorporate these disciplines within Marxism and, in doing so he tried to expand the perspective of Marxism. This enterprise was both polemical and theoretical in scope. His polemic was written in opposition to the positivist and mechanistic versions of Marxism which had become dominant within the French Communist Party in the 1950s.

Sartre’s lecture at the Gramsci Institute suggests that he held out more hope for Italian Communists. I think that this lecture should be read in relation to Sartre’s major philosophical works like The Critique of Dialectical Reason and The Family Idiot. It may be more important as an historical document than it is as a statement about the importance of subjectivity in Sartre’s philosophy. Sartre’s lecture, and the following exchanges with leading Italian Marxist philosophers, makes it clear that he was interested in engaging in a serious dialogue with Marxist philosophers, and in this light, the lecture is well worth reading.