Marx & Philosophy Review of BooksReviews‘Capitalism in the Web of Life: Ecology and the Accumulation of Capital’ reviewed by Shane Hopkinson 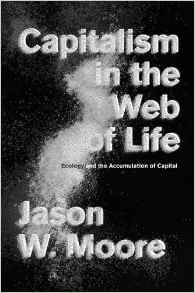 Jason W Moore
Capitalism in the Web of Life: Ecology and the Accumulation of Capital

Shane Hopkinson is Lecturer in Sociology at CQ University, Brisbane. He teaches introductory …

Jason Moore is a key figure in the World-Ecology Research Network and has produced a text that is required reading. It is a challenging read which assumes the reader is familiar with Marx’s critique of political economy but Moore and his co-thinkers seek to bring nature to the centre of historical change and a dialectical understanding of capitalism to the heart of the analysis.

There have been long debates about the transition to capitalism but Moore makes the case for the world-systems version of capitalism as a 500 year old civilisation. It is a historically unique system of social relations as its ‘law of value’ derives not from the productivity of the land but from the productivity of free labour in the zone of commodification. Moore follows Marx’s framework closely while insisting that capitalism is far more than an economic or even a social system but that it is a way of organising nature. World-ecology as a framework seeks to unify ‘the production of nature, the pursuit of power and the accumulation of capital’ as a way of ‘re-reading the diversity of modern human experience as unavoidably, irreducibly, socio-ecological’ (291).

Capitalism’s civilisational strategy relies on a cultural dualism in which nature and society are posited as separate ‘things’. Nature (with a capital ‘N’) could be appropriated as ‘free gifts’, allowing Society (with a capital ‘S’) to accumulate capital and wastes to be dumped overboard. It is this strategy that has reached its limits, manifesting in the pressing realities like climate change, ocean acidification and the sixth great extinction of biodiversity. To escape the crisis Moore argues for a more dialectical understanding of ecology as embracing a single world-system.

The critique of nature/society dualism is hardly new. The Green movement has created a widespread consciousness that humans are part of nature. Recent Green thought has taken the idea that humans are a force of Nature to the extent of talking about it as defining a new geological epoch called the Anthropocene. But the dualism – since it forms part of the capitalist culture – tends to reassert itself. Humanity is seen as a threat to Nature, Society as exceeding natural (i.e. external) limits. Humans as a biological species, or as abstract individuals, are part of nature, but human organisations like homes and factories, markets or even empires much less so. Dialectics is central to countering the reductionism – humans themselves are environments for trillions of bacteria and there is no clear line between what is social and what is natural. The society/nature dualism has served to naturalise the capitalist system. But the prevailing reductionism is not just ideological.

Capitalist culture conceptualises Nature as somehow ‘outside’ society because it does not value it in the same way as labour-power. Thus nature can be treated as ‘free’, as simply ‘raw material’, for the processes of capital accumulation. Likewise women’s labour at home does not need to be paid because its ‘natural’ for them to do that reproductive work. Plantation slaves did not need to be paid because slavery was declared as the ‘natural’ state of Negros. Capitalism relies on exploitation of labour and appropriation of nature – in the form of what Moore calls the ‘Four Cheaps’ (labour power, food, energy and raw materials). Capitalism’s boundaries extend from the point of production to the colonial frontiers, and into the domestic sphere, but culturally capital accumulation requires that there is a ‘free’ Nature which operates independently of Humanity and vice versa. So some unthinking is required at a number of interrelated levels: ontologically, methodologically and historically.

Ontologically, Moore proposes a new concept to grasp our ecology as oikeios – a dialectical perspective that understands the fundamental ontological relation is between humans and the rest of nature which shapes all of human experience. Our ecology ‘derives from oikeios, within and through which species make – and always remake – multiple environments… All life makes environments. All environments make life’ (45). And here ‘environments’ includes office towers and airports. Nature then is not a substance outside Society but a historical relation – world-ecology does not seek to incorporate ecology into an already existing historical analysis but to understand how capitalism takes shape through the co-production of nature, the pursuit of power and the accumulation of capital – not as interconnected sets of relations but as three moments in an interconnected process.

This is very different to the dominant discourses in which humans, when not simply defined as the problem, are not seen as social beings. It is the vision of an abstract Humanity (an ‘Anthropos’) which leaves a ‘footprint’ in an abstract Nature – seen as a tap or a sink. This footprint, it is then said, must be reduced. Treating biospheric limits abstractly does not allow us to frame the problem correctly. The system’s real, concrete limits are the limits past which processes of expropriation and appropriation do not allow the reproduction of capital. What really matters are the limits to capital’s maintenance of productivity on one hand and the supply of the ‘Four Cheaps’. ‘Cheap’ here in relation to it capacity to deliver more and more unpaid work into the commodity system. So-called ‘surplus’ population does not exist in relation to the use-values they could generate but in their inability to add value in processes of exploitation.

Likewise Nature is treated as absorbing wastes for free – and if that part of ‘nature’ you dump in includes the human bodies of local residents then they will pay the price biologically with decreased life expectancy or poorer health. Recent environmental disasters like the Deepwater Horizon oil spill are not the product of some new cancerous, extractive form of capitalism but of capitalism in search of ‘cheap’ energy which is harder and harder to find. The problem of climate change in capitalist ecology is not the survival of life on Earth but the fact that warming threatens to raise the cost of the Four Cheaps (especially food and labour which have their own chapters) in ways that will make the self-valourisation of capital impossible.

Second, methodologically refashioning the old Nature/Society dualism opens up a new reading of capitalism’s history as one in which its world historical patterns of soil depletion, deforestation, unemployment or boom and bust cycles can be read through successive historical natures, not as separate economic, social or ecological crises. It is the author’s capacity as a historian of world-ecology that gives this book a great deal of its power – he has already written a great deal on commodity frontiers which is drawn on freely in this book. Capitalism created whole new landscapes of historically co-produced nature from which value could be extracted and which ensured the biological reproduction of the sugar cane, for example, on a global scale. There are similar configurations of socio-biological reproduction in the gendering of domestic labour in the private sphere ‘outside’ society. The arena of human reproduction – beyond the fusion of egg and sperm – is a co-production of social and biological processes. There have been long debates between Marxists and feminists about the role of social reproduction but world-ecology here takes the monistic view that ‘Cheap’ labour does not turn up to the factory gate or office door ready-made any more than cheap raw materials.

This allows world-ecologists to engage in debates over socio-ecological limits and how capitalism has superseded these in the past. The question now is ‘how do we identify, narrate and explain the emergence of these limits, historically and in the present conjuncture’ (293). An answer to these questions – which is still a work-in-progress – opens up the question of what an alternative might look like beyond the catastrophism of the neo-Malthusians (and increasingly a section of Marxist ecologists).

Moore invokes Marx’s contradictory ‘Law of Value’ at the centre of capitalist civilisation – and its contradictions play out in unemployment, falling real wages and financial crises in the zone of commodification that relies on increasing rates of labour productivity. He includes within this a ‘Law of Cheap Nature’ a zone of appropriation on which production depends, manifesting, until recently, as a growing series of commodity frontiers. Seeing capitalism as a way of organising nature means that, instead of a series of ‘converging crises’ (Bellamy-Foster’s phrase), we can see food and climate, finance and energy as forms of crisis in a ‘singular civilisational project: the law of value as a law of Cheap Nature’ (298).

Moore’s analysis makes it clear that it is difficult to see how capitalism can find the resources it needs to solve this crisis within its own project of appropriation and capitalisation. There are limits to the finding of the Four Cheaps explored in different chapters and it is hard to see new frontiers opening up in the way they once did. The strategy of Cheap Nature seems to be at an end. Such moments of systems transition also produce movements of resistance. The formerly ‘cheap’ labour of the periphery gets organised – and makes global connections more quickly with the information superhighway. The emerging movements for food sovereignty, climate justice and de-growth involve what Moore calls a ‘new ontological politics’ (294). These movements go beyond bettering the conditions of exploitation and appropriation (important as they may be) to the question of value itself. They raise new questions about alternative ways to value food, nature and everything else. It is these alternative valuations that will be pivotal in a new transformative politics, an eco-socialist law of value that would value the set of things that are useful to humanity and seek to create a set of socio-ecological relations that would allow the flourishing of human and extra-human natures.