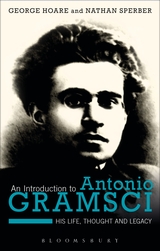 George Hoare
An Introduction to Antonio Gramsci: His Life, Thought and Legacy

The life, thought, and legacy of Antonio Gramsci keeps attracting the attention of scholars and researchers in various disciplines, from literary and cultural studies, to translation theory, social studies, political philosophy, and the history of Marxism. George Hoare and Nathan Sperber offer a most recent introduction to Gramsci that will be especially useful for newcomers to Gramscian studies, and which puts the achievement of the Italian Marxist philosopher into a wider context.

The book is comprised of a short introduction and four parts, which deal, respectively, with Gransci’s life, thought, applications, and legacy. They are followed by a guide to further reading, a bibliography, and an index. Hoare and Sperber commence the introduction with a brief section on ‘Thinking through Gramsci’, observing that there now exists a whole ‘Gramsci industry’ with ‘a great many different Gramscis. Thus we see a Gramsci in International Relations, in Cultural Studies, in Political Theory, in Literary Theory and in Postcolonial Studies. There is a Gramsci used by the Right and one claimed by the Left’ (1). Against the diversity and proliferation of these approaches to Gramsci, the authors argue for ‘a unified and consistent Gramsci, a Gramsci essential for critical thought today’ (1). Though the task of producing a ‘unified Gramsci’ might turn out to be impossible, it is very important that a recent attempt has been made for a consistent interdisciplinary (or multidisciplnary) presentation of Gramsci, and of his achievement and legacy.

Part One is devoted to Gramsci’s biography, his intellectual development, and to some of his early writings. Every stage of Gramsci’s life, from his Sardinian origins onwards, shaped his thought; conversely, and tragically, his thought also shaped his life. His early involvement in politics (first the Italian Socialist Part, then the Italian Communist Party) radicalized his thought, whereas experience in political journalism ‘instilled in him a talent and a taste for polemics’ (11). Part One also provides relevant information on Gramsci’s trial and imprisonment, and concludes with a powerful fragment from his 1928 letter to his mother: ‘I’ve always refused to compromise my ideas and am ready to die for them, not just to be put in prison’ (23).

Part Two discusses Gramsci’s ‘Thought’, and is divided into chapters on culture, politics, philosophy, and hegemony, respectively. This part of the book might be used as a self-contained and concise guide to the most important aspects of Gramscian thought relevant to the different disciplines that have come to engage with his work. In the chapter on culture, the authors note that though Gramsci never provided a systematic explication of his theory of culture, his conception was both social and political (an observation that can be carried over to his other fields of interest). He considered culture as the antithesis of a system, a ‘succession of quotidian practices’ (28), accessed through the ‘combined ways of acting, perceiving and feeling of all people’ (29). Chapter 2 also discusses intellectuals, education, journalism, and popular literature. According to Gramsci, intellectuals and education are tightly linked, since education trains and forms intellectuals, and the intellectuals are constituted by their social role, which consists in the production and diffusion of knowledge in society. This is a very modern approach to the social characteristics of intellectuals (and one which differs from the traditional Marxist inclusion of intellectuals into the bourgeoisie). However, as observed by Hoare and Sperber, despite ‘his consistent rejection of vulgar economic determinism, Gramsci stays faithful to Marx’s original insight that intellectual life is always situated in a socio-historical field of forces in which class struggle is the primordial reality’ (34); at the same time ,this new intellectual ‘should never go as far as to doctor the truth in the name of the revolution’ (38).

Chapter 3 focuses on politics, understood by Gramsci as an ‘essential moment of social life’ (53), with sections on the triangle of concepts (civil society—political society—the State), which constitutes the ‘cornerstone of Gramsci’s theory of politics’ (55), and on the interpretation of modern politics and the modern Prince. The authors note that Gramsci’s historical-political research reveals ‘an epistemological caution that is complementary to his theoretical audacity’ (60), and that his approach to the analysis of politics is inductive, with theory emerging from concrete findings. Throughout this chapter it is clearly visible that for Gramsci a careful analysis of the present as it is (socially, politically) is an essential prerequisite of any transformation (including, crucially, the revolutionary one).

The strict ties linking theory and practice are also obvious in Gramsci’s approach to philosophy, which is the subject of Chapter 4. As is well known, Gramsci redefined philosophy, viewing it in the context of everyday life, and asserted that ‘every man is a philosopher’ (83); furthermore, philosophy is a certain conception of life to which an ethical attitude is attached. Other parts of this chapter introduce the topics that are strongly related to philosophy in Gramscian thought, namely, ideology, economy, Americanism, Fordism, and the concept of praxis. Additionally, Hoare and Sperber devote some pages to the influence (and final rejection) of Giovanni Gentile and Benedetto Croce on Gramsci’s thought, and in their conclusion to the chapter they note that ultimately ‘for Gramsci politics and philosophy are most intimately joined together through the revolution of common sense’ (116). Common sense (senso commune) is discussed in more detail in Chapter 6.

The last chapter in Part Two is devoted to the reconstruction of Gramsci’s most famous concept, that of hegemony. Hoare and Sperber aim to show how this concept relies on other stipulations, especially the ones concerned with intellectuals, culture, society, and politics. Very basically, hegemony, for Gramsci, serves to stress the cultural, moral and cognitive aspects of leadership; the dimensions of ‘the exercise of political power’ (118). Hegemony constitutes a form of knowledge and signifies an ethical renewal. It is constructed through various mechanisms of political negotiation and intellectual persuasion, and at the same time it is a fundamentally cognitive and moral process (125). Similarly to other concepts in Gramsci’s thought, hegemony has a dialectical and dynamic aspect. The authors also discuss the historical stages of hegemony (from the pre-hegemonic state, to the regulated society), and also hegemonic consciousness as catharsis, i.e. a moment of intensity resulting ‘in the intellectual liberation of the subject’ (131). The discussion of culture, philosophy, politics, and hegemony demonstrates that these concepts represent ‘complementary aspects of a unified project of the renewal of historical materialism’ (142).

Whereas the first two parts of the book provide necessary background information and analyses of relevant concepts, Part Three, ‘Applications’, presents two very interesting chapters on ‘thinking through Gramsci’ in political theory and political economy. Part Four is concerned with Gramsci’s legacy in Western Marxism, Italian communism, post-Marxism, and also in postcolonial studies and cultural studies. Chapter 6 offers a critical analysis of the notion of Left/Right as part of the ‘common sense’ of modern politics and modern life. The applied methodology contextualizes common sense, traces the historical development of the notion of Left/Right, analyzes the sources and implications of the metaphor, and finally interprets Left/Right as a story about society and politics (i.e. as a political narrative). It would be most interesting to see (and interpret) how the metaphor and discourse developed and changed on both sides of the Iron Curtain, also historically, before, during, and after the fall of the Berlin Wall.

Chapter 7 shifts attention to political economy, and investigates neo-liberalism and hegemony in Britain and France in the 1980s. Hoare and Sperber show how Gramscian categories may sharpen the understanding of the diffusion of neoliberalism across the globe. They refer to Stuart Hall’s interpretation of Thatcherism as a hegemonic project, and they briefly discuss the socialist politics in France before 1981, and the consequent developments. The Franco-British comparison shows that whereas economic transformation was utilized as a mobilizing cause by Thatcher in Britain, in France it became an argument for popular demobilization (200).

In Part Four, Hoare and Sperber attempt to map ‘Gramsci’s influence on contemporary critical thought’; they caution, however, that such a map is by necessity limited and schematic, ‘not least because Gramsci has had an influence on virtually all subjects within the humanities (…) and with the availability, strengths and weaknesses of collections of his prison writing’ (205). The chapter places Gramsci within the perspective of the first generation of Western Marxism (alongside such figures as Georg Lukács, Walter Benjamin, Max Horkheimer, and Herbert Marcuse), Italian post-war communism, and also post-Marxism, on the one hand, and postcolonial studies and cultural studies, on the other. The authors conclude this part with a brief overview of the influence of Gramsci’s thought in international relations, and especially the sub-discipline of international political economy, with attention to Robert Cox’s innovative work on a neo-Gramscian approach and internationalizing the concept of hegemony. In an attempt to assess Gramsci’s future they suggest that his concepts and method ‘and in particular his extension and renewal of Marxism are useful tools for thinking through capitalism today’. They also observe that Gramsci is ‘one of the foremost theorists of defeat in the history of critical thought’ (234), which makes his writings additionally attractive, and they finally suggest retaining a healthier ‘Gramscian pessimism rather than a useless defeatism’ (234).

The book concludes with a concise guide to further reading, with separate sections on Gramsci in English, publications devoted to Gramsci’s life (including reference to the documentary ‘Everything That Concerns People’ available on YouTube), secondary sources, and other electronic resources. This guide chapter also includes a short section with a suggestion on reading Gramsci, especially useful for a potential reading group.

George Hoare and Nathan Sperber have produced a modern, methodologically consistent introduction to Antonio Gramsci, his thought and legacy; an excellent guide to interdisciplinary Gramscian studies.