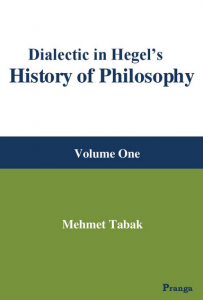 Michael Lazarus is a PhD candidate at Monash University, writing on Marxist ontology with …

In a sea of commentaries on the Phenomenology – almost a genre in its own right – a study of Hegel’s Lectures on the Philosophy of History is certainly novel. The focus of the book is narrow; Tabak offers an analysis of just the first volume of Hegel’s tripartite Lectures, which covers ‘Oriental Philosophy’ to the Later Cynics. He intends for the Dialectic in Hegel’s History of Philosophy (DHHP) to be the first of three books; each dealing with each volume of Hegel’s lectures. As such, Tabak’s project promises to be an extensive and pioneering project, and therefore of definite interest to Hegel scholars. Tabak’s intended audience, however, is wider than this relatively narrow field. He suggests that the Lectures offer the best route into an examination of Hegel’s dialectic (9). Indeed, Tabak’s initial aim was to write a work on the dialectic itself but when it became evident ‘that dialectic itself has a history’, the undertaking expanded to deal with Hegel’s approach to the ‘entire history of philosophy’ (5). However, the greater justification of the book cannot help but be diminished by the largely obscure content. Nevertheless, Tabak handles the material well, extensively incorporating arguments and issues from Hegel’s expansive body of works. Tabak’s prose is mostly sharp and clear; he allows Hegel to speak for himself while ensuring the reader is following the progression of Hegel’s argument. As such, DHHP is a very useful introduction to the Lectures, offering concise explanations of key Hegelian notions, and charting the movement of the dialectic with the movement of the philosophy of history.

As Tabak explains, Hegel taught his History of Philosophy course nine times from 1805-1830. In these lectures, Hegel outlined the progression and development of philosophy up until his own day, claiming that it was completed with his own system. Every historical moment in philosophy forms a totality, cohered by the universal principle of Reason (3). The Lectures chart the dialectical movement towards the self-realisation of philosophy as the ‘objective science of truth’ (Hegel 1955, 12). Since the very history of philosophy is dialectical, Hegel’s Lectures allow for a demonstration of the full workings of the dialectic itself.

Here, Tabak makes the point that the dialectic should not be understood ‘merely as method’, or a form of philosophical inquiry. Instead it should be understood as an attempt to theorise reality, namely to ‘cognize this world by finding itself, its principles and categories within it’ (6, 9). Thus Hegel’s achievement is to provide a dialectic of reality that surpasses method, since, citing Kojève, dialectic refers to the ‘structure of Being, and […] the realisation and appearance of Being as well’ (ibid.). Hence, Hegel understands the progression of thought as an objective process that is compelled by the nature of its own inner relations. However, though I agree with Tabak’s emphasis on the conceptual link between dialectic and Being, he does not provide enough justification for his overall claim to be convincing. To my mind, these insights are more reflective of the strength of the historical dimension of Hegel’s method, rather than an advance past method entirely.

The first chapter of DHHP establishes the dialectical concepts that are pivotal to understanding the Lectures. Formed from the internal development of the Notion, philosophy is understood through a process of negation, where, in advancing to the self-understanding of the Absolute, true knowledge can be grasped (12-14). Tabak writes: ‘[t]he main task of philosophy is to cognise the universal Notion in its developments, and to arrive at its Absolute form at the end’ (19, see also Hegel 1955, 56). Teleology is the lynchpin of this understanding. Here, Tabak underscores the decisive influence of Aristotle, who Hegel cites as an almost unrivalled authority throughout the lectures (27). Teleology conceives of the realisation of potentials following paths of development inherent in the makeup of forms. Considering the controversies related to this type of theorisation, especially the charge of determinism, it would have been useful if Tabak outlined in clearer terms what is at stake here. Instead, he makes reference to the march towards Reason (14, 203), but also notes at length the critical nature of potentiality and actuality for the dialectic (26-33).

On other issues, Tabak’s is exceptionally clear, and offers a very useful assessment of abstract and concrete thinking. Here his command of Marxism shines through, demonstrating the resemblance of the concrete in both Hegel and Marx. The concrete for Marx, as Tabak explains, is the synthesis of ‘the internal relations of the specific determinations of a thing or a phenomenon’, thus the ‘unity of the diverse’ (23). This definition defies a crude conception of the concrete as tangible or immediate existence and the abstract as pejoratively metaphysical and symbolic. Instead, Tabak suggests that the abstract is determination when taken individually. Thus, ‘the concrete is the synthetic unity of many determinations that are abstracts on their own’ (ibid.) This argument draws Marx together with Hegel and illuminates the significance of this conception for the former’s analysis of the commodity form that famously rises from the abstract to the concrete. This move from the particular to the universal is fundamentally Hegelian.

Tabak prefaces the next chapter, Hegel’s discussion of ‘Oriental Philosophy’, with a reminder that this lecture ‘cannot be taken as a serious, scholarly analysis’, as it is tainted by prejudice and inadequate source material (40). Tabak instead takes it upon himself to reconstruct Ancient Chinese and Indian Philosophy. In doing so he challenges Hegel’s generally negative treatment. Hegel does not regard ‘Oriental Philosophy’ as ‘true philosophy’, and describes it as ‘preliminary’ and ‘more properly the religious mode of thought’ (Hegel 1955, 117). For Hegel, philosophy is preconditioned on an understanding of the ‘universal substance, the finite and eternal Idea’ (53). Tabak challenges Hegel’s ambivalence to Chinese and Indian Philosophy and argues they ‘were far more developed than Hegel had presumed’ (42). Here Tabak judges Hegel’s comments against his own “yardstick”, taking philosophy to contain ‘the speculative, universal Notion’ (45), but contra Hegel, charts an understanding of the insights of Chinese and Indian philosophy that ‘surpass[es] the depth and scope of much of the early Greek philosophical traditions’ (85). To provide a few examples: Confucius’ conceptualisation of the soul entails that happiness is understood by knowledge (44); the unity of opposites expressed in Yang and Yin bears direct comparison to Hegel’s unity of opposites (46-8); Lao Tzu’s notion of ‘pure reason’ and its similarity with Hegel’s abstract Notion (48-9), the theory of causation and triadic structure in Sanc’hya (62-4); and, the opposing theory of atomism in Vaiseshica and the Nyaya (74). Tabak also draws considerable attention to the Nyaya method of inference and its similarities with Aristotelian logic (79-80). The discussion adds considerable depth to Hegel’s shallow characterisation of Chinese and Indian philosophy.

From here, Hegel turns to the Greeks, which covers the remainder of the Lectures. This discussion covers a huge area in the history of philosophy, and while Tabak does well to chart Hegel’s manner of exposition, this section underlines the need for Tabak’s book to be read alongside the Lectures themselves. These sections of DHHP would be overly schematic if not compared next to the original discussion.

The Lectures have a chapter for each division of early Greek philosophy. The first period starts with the Ionics (Thales, Anaximander and Anaximenes), then Pythagoras, followed by the Eleatic School (Xenophanes, Parmenides, Melissus and Zeno), which proceeds Heraclitus, and Empedocles, Leucippus and Democritus, and finally, Anaxagoras. The second division covers the Sophists (Protagoras and Gorgias), Socrates and the Socratic schools (Megaric, Cyrenaic and Cynic).

Hegel presents each philosopher in succession in order to demonstrate the progression of thought, namely the Notion as it moves from an abstract to a concrete understanding. As Tabak reminds the reader, ‘Hegel sees all the variations in philosophies as the necessary moments of the whole system of philosophy, and, because they are moments of the same system, as continuous links of a single chain’ (88). Tabak does an exceptional job in charting Hegel’s treatment of each philosopher. He describes how each fits into Hegel’s greater scheme of philosophical development, mainly through the contribution each philosopher or school has made to the history of philosophy. As Tabak frequently points out, this contribution is framed in specific relation to Hegel’s own categories. Incorporated in the same discussion, Tabak offers an assessment of Hegel’s characterization, pointing out places of confusion, ambiguity and misinterpretation. This provides significant insight into the mechanisms of Hegel’s argument in his overall philosophical narrative.

This approach is especially useful to draw out problems in the text. Hegel’s conflation of the Megaric, Cyrenaic and Stoic schools under the blanket term ‘Socratics’ is a clear example of this. Hegel groups them together, because, he reasons, they associate the Good with the individual. After offering this characterisation of Hegel’s claim, Tabak suggests that

Hegel retreats from this conflation, though he still attributes his own ideas to the Socratics. On the one hand, this strategy makes it difficult for us to sort out what belongs to Hegel and what belongs to each Socratic philosopher discussed below. On the other, it creates a valuable opportunity to understand some of the key tenets of Hegel’s own philosophy (217).

Furthermore, Tabak’s handling of the Greek philosophical narrative, and his description of how Hegel evaluates early forms of dialectical notions, is excellent. Here the discussion of Heraclitus’ unity of being and nonbeing (i.e. the unity of opposites) (130-8), Anaxagoras’ nous (Reason) (153-169), and Socrates dialectical method (193-211), supply a firm basis for the historical genesis of Hegel’s categories, as well as a sense of both how he views his thought next to his forbearers, and how thought develops through contradiction.

To conclude, DHHP draws critical attention to a largely neglected aspect of Hegel studies. While the book includes enlightening consideration of important aspects of Hegel’s dialectic that are not restricted by hefty debates between Hegel scholars, the obscurity of the content covered in the Lectures significantly limits the greater appeal of the book. Woven throughout Tabac’s text, there is direct analysis of Hegel’s dialectic, but since the greater theoretical aim of the book is to make the nature of the dialectic clear, it could be more frequently foregrounded. Nevertheless, DHHP serves as an excellent reading guide and source for Hegel’s treatment of ‘Oriental’ and Early Greek philosophy.

A final comment, or a dull quibble, is that frequent typesetting errors make references difficult to follow, and, annoyingly no index is supplied.