Marx & Philosophy Review of BooksReviews‘The Next Revolution: Popular Assemblies and the Promise of Direct Democracy’ reviewed by Nathan Wood 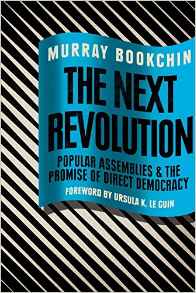 Murray Bookchin
The Next Revolution: Popular Assemblies and the Promise of Direct Democracy

The political activism within the 21st century has largely involved groups unified by specific problems, rather than any theory or particular end goals they are trying to achieve. The Occupy Wall Street movement, the Anonymous hackers, and #BlackLivesMatter are some of the most paradigmatic examples of this type of activism. All of these movements have a similar leaderless structure that embodies the equality and direct democracy that serve as underlying values. However, there is a kind of disenchantment or hesitation to get involved with these groups by some. This could be for many different reasons, though one such reason could be that they do not offer any specific alternative social/political/economic structure to the one we already have. It is not apathy that pervades society, but uncertainty. Fighting and sacrificing for a political cause is very difficult to do without a united vision of what you are ultimately trying to bring about. Given the past history of institutionalized totalitarianism cropping up from the fertile revolutionary soil, the question on the minds of young political activists is not so much ‘can or should the current political system be overthrown,’ but ‘what comes after it is overthrown?’ Revolutions may seem like a bad gamble, an exchange of one terrible unjust political and economic system for another. Meet the new State, same as the old State. This collection of essays represents an important first step in recovering a group of revolutionary heroes the likes of which we have yet to see this century. Bookchin is an ecological thinker first and foremost whose political philosophy is deeply informed by the environmental crisis that he feels neither orthodox Marxism nor libertarian Anarchism are capable of sufficiently combatting. These essays are Bookchin’s mature thinking regarding the limits of anarchist political philosophy and the importance of incorporating “social ecology” within a political theory. He reflects on his early support of Anarchism and disputes with Marxism for the purpose of laying down a framework for rethinking the ineffective elements in both. He is a thinker seeking a Hegelian moment of synthesis between the two supposedly antithetical poles of Marxism and Anarchism. The synthesis he is seeking is not a puzzle building exercise of taking a few pieces of Marxism and a few from the Anarchist tradition to try and fit them together into a fragmented and incoherent picture. Rather, there exist important seeds within the traditions of Marxism and Anarchism that, given the right soil, could produce the elusive fruit of justice and equality. It is the question of the type of soil (i.e. the political structure) necessary for these ideas to grow that is truly of interest to Bookchin and the essays presented in this work all revolve around this basic question.

Bookchin began as a staunchly devoted Anarchist, but this collection of essays shows a thinker who has abandoned any adherence to party or theoretical doctrine in search of practical and effective methods for establishing a genuinely free society of equal citizens. Capitalism has a way of adapting the world around it to the shape of its own logic and, therefore, camouflaging its contradictions to look like strengths. It is a hard truth that the Left has had to acknowledge during the twentieth century. The fast paced fluidity and ever evolving ways that capitalism asserts its dominance continually throws off opposing social and political philosophies by changing faster than we can analyze it. By the time we think we have a grasp on the current state of capitalism it has evolved and created new problems for old political theories to address. Capitalism is an organized chaos where human hands have let go of the reins to endorse a faith in trickle down salvation. Bookchin seeks a path between ideology and utopia (a similar goal that Karl Mannheim endorses in his Ideology and Utopia) that both transforms and reignites the potential for social activism. The problem with the available set of political theories is that they cannot “retain the same relevance that they had at an earlier stage of capitalist development and in an earlier period of technological advance. Nor can any of them hope to encompass the multitude of new issues, opportunities, problems, and interests that capitalism has repeatedly created over time.” (7) In particular, Bookchin is stuck between a love for Marxism and Anarchism, but at the same time equally disappointed with both. His account of ‘Communalism’ is intended to overcome the narrowness of Marxism as well as the hyper-individualism of Anarchism by synthesizing many of their insights around social ecology. His criticism of Marxism is aimed at the reductive and overly simplistic understandings of the contemporary social and economic problems as simply reducing to the conflict between proletariat (or “workers”) interests against those of the bourgeoisie. For Bookchin, this type of analysis is more a reflection of the era in which it was developed than a genuine understanding of contemporary problems. His criticisms of Marxism are fairly mild in comparison with his scathing disappointment in the way Anarchism has developed. He criticizes their primitivism, hyper-individualism, utopianism regarding human nature, and fear of any institutions of authority (specifically a legal system) as utterly naïve and irrational. However, the thinker this collection of essays presents is a revolutionary that has no more capitulated to Marxism than he has completely abandoned his anarchist concern with centralized coercion. What he offers in these essays is a new approach that abandons all devotion to dogma and repels any simple categorization.

If a strength of ‘compatibilist’ theories like Bookchin’s is that they can pick and choose from a variety of ideas, the potential weakness is that such theories exchange strong, specific claims for weak and vague positions. Such accounts also run the risk of ignoring important distinctions and incompatibilities between the different ideas. It is a virtue of his thinking that he knits together ideas from Marx as well as Kropotkin and Bakunin (just to name a few inspirations) without compromising his capacity to distinguish his views from opposing theories as well as provide specificity within his social and political analysis. His willingness to transcend dogma is in the service of achieving greater clarity and specificity in answering the questions that face us today. It is significant, then, that his theory is not compatible with any theory of Marxism or Anarchism and he goes to great lengths in disavowing vulgar and naïve accounts of either theory. What Bookchin seeks to capture in his mature theory are the underlying beliefs and sentiments that motivate these movements and a belief that, at least at a fundamental level, they do not necessarily conflict.

The coercive power of the state remains a basic concern of Bookchin’s, which raises the interesting problem of delineating the state from a confederacy of municipalities. The difference that Bookchin emphasizes is that the state is a centralized authority, whereas the municipalities are independent locally autonomous societies. It may seem that this distinction resolves questions of coercive power, but such a conclusion would be rash. Imagine the individual states in the US as municipalities during the middle twentieth century. The rampant racism, sexism, and prejudice within the southern states raises the issue of what other municipalities are supposed to do in light of such oppression? Of course, the first approach would be to try and reason with them, but such racial and gender prejudice is buried deep within the culture. Is there any other option available on Bookchin’s account? This is what is largely unclear and potentially problematic. If war was necessary to create a fair and equal society within these municipalities does Bookchin have the theoretical resources to rationalize such an action? In our history the state coercively intervened to allow the desegregation of schools through military force. It has enforced labor legislation against children being forced into the factories. This is certainly not to excuse or justify the dark record of the state as an instrument of oppression, but it is to raise the difficulty of simply eliminating it. However, the fact that Bookchin does not have a ready and easy answer to this problem should motivate engagement with his ideas, rather than disqualifying them.

The true import of this book is twofold. Firstly, as an introduction to the thought of Murray Bookchin it is incredibly valuable and serves to motivate deeper engagement with his more detailed works on urbanization, social ecology, and “libertarian municipalism.” Secondly, the locus of political analysis in the book reflects the shifting battlefield for the Left, away from international revolution towards urbanization and revolutionizing the structures of cities themselves to incorporate egalitarian structures. The work of David Harvey has taken on this dimension of Marxist analysis and specifically developed it within works such as Social Justice and the City (Geographies of Justice and Social Transformation) as well as Rebel Cities: From the Right to the City to the Urban Revolution. While the nineteenth and twentieth centuries have been characterized by efforts at uniting the workers of the world and transforming nations into communist states, the trend of intellectual engagement on the left in the twenty-first century is moving towards the political geography of cities. Insofar as equal access to the basic goods and resources for living a life of human decency are a driving issue within the political left, the ideas of Bookchin are formidable theories that any political thinker ignores at their own peril.