Marx & Philosophy Review of BooksReviews‘Reconsidering C B Macpherson: From Possessive Individualism to Democratic Theory and Beyond’ reviewed by Jules Townshend 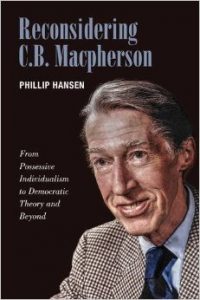 Phillip Hansen
Reconsidering C B Macpherson: From Possessive Individualism to Democratic Theory and Beyond

One of academia’s basic conceits is that the more ‘true’ or ‘rational’ argument will ultimately prevail. Yet in the human sciences this is not always so. The reputation of C. B. Macpherson (1911-87), one of Canada’s most eminent political philosophers, is a case in point. In the 1960s and 1970s Macpherson, along with Herbert Marcuse, was the political philosopher du jour for radical students and young academics in the Anglophone world. His The Political Theory of Possessive Individualism first published in 1962 was an instant hit. It fundamentally challenged existing interpretations of Hobbes and Locke by linking their thought to an emergent capitalism. They legitimised capitalism by holding implicit or explicit ‘possessive individualist’ assumptions. In other words, their writings (along with Harrington and the Levellers) were imbued with a capitalist market created ontology: the self is conceived as a self-owner of his or her own person and capacities, with no sense of being part of a larger moral whole and with no intrinsic, overriding moral obligation to society . Macpherson’s later work Democratic Theory: Essays in Retrieval (1973), apart from justifying the notion of a democratic society in which all could equally exercise their human powers in a non-contentious way, was a full-bloodied assault on the transatlantic liberal establishment, with John Rawls, Isaiah Berlin and Milton Friedman amongst his chief targets. The proverbial elephant in the room was the Cold War, and Macpherson could have easily been ignored if his writing consisted of straightforward Marxist-Leninist dogmatism; but his finely honed textual analysis, his championing of the liberal ‘developmental’ individualism of Mill and Green, and his sophisticated immanent critique of liberalism made this difficult. The liberal establishment duly responded, and many a young academic cut their intellectual teeth in attempting to demolish the ‘Macpherson thesis’. An analysis of the debates between Macpherson and his critics however shows that it is difficult to say that they got the better of him. Yet today he is a forgotten figure with few references to his work. Thus reputation and refutation do not necessarily correlate. Yet reputation and relevance might do so. As class politics in the classical sense faded from the late 1970s in the West and radical theorists became more interested in the problem of political agency and identity politics, Macpherson’s relevance waned. Straight-ahead Marxists no longer seemed to be the only radicals in the room.

Phillip Hansen’s treatment of Macpherson, written seemingly as an act of homage to his former teacher, seeks to show, however, that he still remains our contemporary. Hansen’s stated strategy seeks to avoid revisiting debates between Macpherson and his numerous critics and demonstrating that Macpherson got the better of the argument. Instead, he wants to make him relevant by highlighting what he deems to be meta-theoretically (or ‘meta-methodologically’ and even ‘metaphysically’) implicit (or ‘suppressed’) in Macpherson’s writings , and making it explicit by revealing their affinities with the Critical theory of the early Frankfurt School, and of Horkheimer in particular. In doing so Hansen hopes to offer a dialectically charged research programme for students who want to ‘humanise’ the human sciences by combining political theory and philosophy as well as political economy, and avoiding the delusion of pure ‘objectivity’. Hansen emphasises what is a little discussed, but nevertheless important, dimension of Macpherson’s work, namely his critique of positivistic political science (what feminists would term the ‘view from nowhere’) , a perspective that in the 1950s led many who upheld the fact/value distinction to proclaim the ‘death’ of political philosophy.

Whilst the exposing of Macpherson’s ‘meta’ aspects and demonstrating his affinities with the Frankfurt School is the declared theme of the book, Hanson has other objectives in mind. Perhaps because he wants to make Macpherson relevant to a new generation of scholars, Hansen devotes considerable space to exposition and explanation of his concepts, showing how they all fit together. The book is no less interesting for that, and even at this level serves as an excellent introduction for the more sophisticated student of political philosophy who is new to Macpherson.

A third objective appears to be that although Hanson is full of admiration for Macpherson, he remains a critical friend, and quite rightly alerts us various weaknesses and difficulties in his writings. And as a friend he does on occasion defend him against some of his critics, especially Kenneth Minogue. A further aim is to show how Macpherson ‘s critique of liberalism in some ways is just as relevant in our own day as it was in his, as possessive individualism penetrates ever deeper into the political, economic and social fabric of daily life as a result of the global neo-liberal hegemony. Finally, Hansen argues that Macpherson’s critique of contemporary democratic theory and political science has stood the test of time. In effect, this book is a series of interesting meditations on Macpherson’s thought (spilling over into long footnotes!) arguing for his continued importance.

As a critical friend Hansen deals with a number of difficulties in Macpherson’s work. For example, in dealing with the issue of whether Hobbes’ thought reflected an emergent capitalist market society, Hansen argues that it was closer to simple, rather than capitalist, commodity production. Indeed, Macpherson’s earlier account of Hobbes stressed the role of market induced individuated scarcity as the driver of political obligation, rather than the idea of the state as guaranteeing the peaceful invasion of individual powers (i.e. exploitation) as the later Macpherson proposed. Hansen also raises the question of Macpherson’s problem of human needs echoing Marcuse’s distinction between true and false needs. In rescuing Macpherson here Hansen might have introduced Nussbaum’s and Sen’s capabilities approach which avoids the totalitarian implications of the true/false dichotomy, which would also have helped validate the ontological element of his perspective.

However, as a critical friend Hansen thinks that Macpherson’s reputation is better served by linking him to the Frankfurt School, especially Horkheimer. By showing how Macpherson’s ‘suppressed’ meta-theoretical postulates run in parallel to ‘Continental’ rather than Anglophone thinking, Hansen hopes that students will appreciate his contemporary relevance. Central to this is the idea that a humanities scholar should – following Horkheimer’s distinction between ‘Traditional’ and ‘Critical’ theory – recognise his or her own historicity and that they can never fully escape the fact that they are part of the social phenomenon that they are examining. Thus moral and political choice is inescapable and the chosen values do not come out of the sky – they too are ‘immanent’. And in a class society such as that created by capitalism the question becomes, whose side are you on? The side which favours ideologies and institutions that create numerous social pathologies from war, poverty, inequality to environmental degradation, or the side that stands for new or reformed institutions and ideas that foster the free exercise of human powers and capacities for all? Macpherson and the Critical theorists shared the same assumption, that the potential tools for human liberation were also ‘immanent’ in the form of a highly productive economic system that could overcome scarcity, as well as some elements of the ideals contained in dominant liberal ideology (especially the developmental liberalism of Mill and Green). Hansen acknowledges however that the question of social agency is an issue, as the radical democratic potential of the working class is far from certain. Both Macpherson and the Critical theorists embraced the notion of immanent critique and its dialectical methodology that reflected the evolving, unstable inter-connectedness between social, economic and political phenomena.

Whilst Hansen usefully illuminates the parallels between Macpherson and Critical Theory, the lurking question is whether demonstrating these affinities is the only way to reveal his contemporaneity. Why not go to the source, i.e. Marx (and Hegel), since these affinities arise from a common heritage? Perhaps Hansen answers this question at the end of the book, where he suggests that a Macpherson/Frankfurt School research programme should be deemed ‘post-Marxist’ (287), that is in a sense both post-Marxist and post-Marxist. Certainly, although Macpherson was highly critical of the term ‘post-Marxism’, this dialectically inflected definition could apply to him as he combined Marxism with elements of an alien paradigm, namely liberalism. Following the logic of this proposal could we not conceive of a ‘post-Macpherson’ research programme in the quest for widening the scope of democratic possibility that also utilises other resources that exist in the progressive ‘tool box’ from feminism, post-colonial studies and post-structuralism, analytical Marxism (given Macpherson’s own analytical propensities), other types of post-Marxism, and of course Marxism itself?

As Hansen admits his research proposals are only ‘tentative’, and although Macpherson’s concepts can be used as a critical resource, combined with other paradigms, as he implies, there is still plenty of life left in ‘plain’ Macpherson particularly in the realm of democratic theory, as Hansen shows in his critique of Benhabib, Saffon and Urbinati. Indeed, the democratic theory of the later Habermas, where the capitalist context of decision-making gets occluded, could be given the Macpherson treatment (pace Hansen)! Again, as Hansen demonstrates there is plenty of scope for a critique of positivist political science, especially in its rational choice incarnation, modelled in economic ‘science’. Finally, we might add that Macpherson’s politico-economic concerns have not gone away. In particular, liberal democracy as a result of the long neo-liberal hegemony in the West has become even less representative as money does even more of the talking; the market-induced ontology of humans as ‘infinite’ consumers has not been good for the planet, and the onward march of robotics and digitalisation under capitalism has made the possibility of a post-scarcity society frustratingly near and yet so far.