Marx & Philosophy Review of BooksReviews‘Time, Capitalism and Alienation: A Sociohistorical Inquiry into the Making of Modern Time’ reviewed by Jared Smith 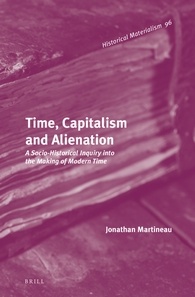 Jonathan Martineau
Time, Capitalism and Alienation: A Sociohistorical Inquiry into the Making of Modern Time

Jared Smith studied philosophy at the University of Georgia, and now works with technology in …

It seems that the more we try to control time, the harder it is to manage. The paradoxical nature of that relationship might be seen in terms of technological advances in marking time that enabled a shift from using celestial movement to atomic oscillation. But author Jonathan Martineau argues the problem is much older. It has to do not with more exact measurements but with abstracting from the lived experience of time to the divisions of a ticking clock.

To start, the author defines two types of time for the analysis. Concrete times are based on lived experience: seasons, night and day, the tempo of daily life. Abstract time, though, divides a given period into equal units – e.g. the uniform hours of a clock. And relatedly there is clock-time, which includes abstract time along with era-time and calendar-time which forms a “worldwide time regime” (111).

Part of the problem, the author states, is that concept of time is so deeply ingrained in the way we organize our lives that it is difficult to examine it. Which is why, the author suggests, capitalist temporality is one of the most successful, yet least discussed vehicles for capitalist power.

In the first chapter, Martineau, argues that we should think of time as a social relation rather than a physical phenomenon. The second chapter traces the emergence of our contemporary concept of time from the late medieval period to the Industrial Revolution depicting a qualitative shift in the idea of time from pre-capitalism to capitalism. Chapter three extends that analysis by examining the relationship between capitalism and the hegemonic concept of time to which it is related.

Clock-time did not spring into ubiquity and one of the most interesting parts of the book is the early history of clock-time. Clock-time acquires its social function in Europe during the Late Medieval period – primarily among merchants for commercial interests and in the Church. The author distinguishes the temporality of the Church and merchants as ‘official time’ as opposed to ‘unofficial time’ which characterized most of social life. Unofficial time was still based on natural rhythms, and varied widely between locales, as did official time, for that matter. But for all the diverse forms of official time, they wield power in similar ways: current suffering – be it as sinner or as debtor – is justified by future liberation. These temporalities sought to dominate the time of others, but did not achieve the level of pervasiveness that we see with capitalist time because concrete time still dominated the bulk of society. Clock-time only gained its hegemony once it became directly involved in value formation.

Capitalist value formation tends to abstract: from both concrete labor and concrete time to abstract labor and abstract time (120). While most of the attention goes to working, Martineau argues that the struggle between labor and capital can also be seen as a struggle between the abstract time necessary for forming value and the concrete time of social life. A good example might be the choice capitalism imposes on working parents: work to support your children, or spend time raising your children, but not both. Capitalist social time relations such as these are characterized by the alienation of time. Martineau concludes, powerfully, that under capitalism, what is brought together by the abstraction and unification of time might be better described as, “everyone’s rush, inability to adopt long-term perspectives, and fear of losing time.” (146). That is a position I am sympathetic to. I think there is probably a very strong argument to be made for it. But I am afraid this book does not quite make the mark.

In several places, Martineau hedges by making it clear this is a preliminary work. That being the case, the space devoted to reviewing the literature in the field makes sense. Martineau frequently engages the work of other authors throughout. But, with “alienation” in the title, it is a bit disappointing that not more time was spent on that topic. What Martineau does say is interesting, and developing it more would be promising. The struggle for reasonable paternity/maternity leave, given its connection with producing the next generation of labor, is ripe for analysis, but is only pointed out briefly. And more attention to resistance to abstract-time would have been worthwhile. A few cases are brought up but none are addressed extensively. The book would have been stronger if less time was given to reviewing the literature and redirected to doing exactly the kind of critical scholarship these issues deserve.