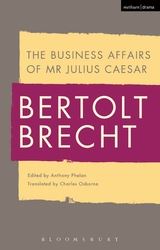 The Business Affairs of Mr Julius Caesar is a novelised account of Caesar’s rise to power by the preeminent German Marxist literary figure and theorist Bertolt Brecht. It is designed to draw attention to the impact economic factors have on history and social relations. The publishing of this book, for the first time in English, marks an important moment in Brechtian studies. It comes as part of a wider translation project of new and first-time English translations of Brecht’s works led by prominent Brecht scholar, Tom Kuhn. It is being offered through Bloomsbury Methuen Drama and is the largest such undertaking in a generation. One of its central contributions is to reveal more of Brecht’s social theoretical concerns. Although this book is ostensibly a novel, it too can be understood as a constitutive element of Brecht’s social philosophy.

That this attention to Brecht’s social theory emerges now can be seen as indicative of a broad shift in Brechtian studies towards treating Brecht not just as a literary figure but as an important, original social thinker. This review attempts fit the book into this trend and make a case for the usefulness of Brecht, as a social theorist, in bringing clarity to contemporary social concerns for Marxists today.

Brecht began working on a Caesar project in 1937 while in exile in Denmark. It seems to have been planned originally as a play but later morphed into novel form. In 1940, during exile in Finland, Brecht was forced to put the work aside due to difficulties in accessing research material. However, as late as 1943 while in his California exile period, Brecht was still concerned with completing the project. He had even discussed the possibility of turning it into a film, in 1942, with William Dieterle. In 1949, some material featuring Caesar was published, in Brecht’s Kalendergeschichten (Tales from the Calendar) as a short story. However, a full novel was never realized. Although Brecht’s plan for the novel envisioned the work in six books, only four were completed and those to varying degrees.

The first book introduces a young scholar who is intent on writing a biography of Caesar thirty years after Caesar’s death. This endeavour takes him to the estate of Mummlius Spicer who was intimately involved in Caesar’s financial affairs, in search of the diaries of Caesar’s accountant, a slave named Rarus. The rest of the existing books are principally comprised of Rarus’ diary entries which describe events in Caesar’s life vis-à-vis his business affairs. These entries, however, are periodically interrupted by movements back to the first-level story of the biographer’s search to discover information about Caesar’s life. What results is a story-in-a-story—a technique Brecht often applied elsewhere in his literary writing, most notably in The Caucasian Chalk Circle.

This technique can be viewed as one of his often noted ‘estrangement effects’ (Verfremdungseffekte). According to Brecht, “[a] representation that [estranges] is one which allows us to recognize its subject, but at the same time makes it seem unfamiliar” (Brecht 1964, 192). They are designed to knock the spectator off balance cognitively and alter their perception of what they are seeing. The purpose is to create a critical detachment between the reader and the events portrayed, which then allows the reader to question her or his common-sense understanding of the world.

In this case, the biographer and those he encounters serve to direct the reader toward a critical inquiry of the diary entries by providing commentary and reflection on the events portrayed in them. For example, before the biographer has read the diaries, Spicer warns him not to “expect to find heroic deeds described in a classical style” and suggests that he “read it with an open mind [and] perhaps [he’ll] find some clues as to how dictatorships are established and empires founded” (49-50).

The secondary-level story paints a complex and contradictory portrait of Caesar. Brecht’s Caesar is at times opportunistic and self-aggrandizing but at others he speaks with eloquent conviction about the need for democratic reforms. He is both thoroughly immersed in the concerns of the ruling classes and a champion of the subaltern classes.

Characters that exhibit contradiction is another hallmark of Brecht’s writings (e.g. in The Good Woman of Setzuan, Mother Courage and her Children, etc.). Brecht rejected the idea of fixed, essentialist characters. Instead, he stressed the situational nature of behaviour by presenting figures whose actions were largely influenced by the material conditions they find themselves in. In Brecht’s words, “a man will respond differently according to his circumstances and his class” (Brecht 1964, 191). These conditions push them toward certain actions and rule out others. This is a central point of Brecht’s social philosophy. He argued that if we change material conditions it would open up new possibilities for humankind.

Throughout the book, Brecht also sets up a Caesar whose political life and business life are indistinguishable, laying the groundwork for a larger argument about the interconnectedness of these realms. In a letter from 1937, he said he wanted this work to show, “how democratic measures can be exploited financially” (Brecht 1990, 269). This is one of the major contributions of the book and gives it a use-value today, especially if we view it against the backdrop of the current U.S. election. Brecht’s account shows that even where democratic structures exist, politics tend toward the machinations of the rich. This fact was recently laid bare in the American Presidential election when Donald Trump, who is running for the Republican nomination, responded to questions about why he previously made financial contributions to a potential Democratic rival, Hillary Clinton. Trump’s response was straightforward. This is how the system works. Business people have to pay off politicians.

In this work, Brecht demonstrates that politics as usual is really an extension of big business in several ways. For example, envelopes of money are constantly being handed off as bribes to influence political decisions and Caesar runs for and holds various public offices (Pontifex Maximus, Praetor, Council) because through control of governmental apparatuses he is able to support his business ventures or advance those of his allies. Furthermore, the theme is also found in books 3 and 4 with a rendering of Caesar’s administration of Spain and triumphant return to Rome with mining contracts in hand and the exploitation of Spanish labour underway.

However, the theme of politics as big business comes out most clearly in Brecht’s depiction of the ill-fated Catilina affair, an insurgent movement supported largely by the subaltern classes because of its promises of debt-forgiveness. The second book is especially devoted to this. Brecht portrays it as a scheme propagated by Rome’s bankers who were really plotting to make Pompey dictator. Such a political result demanded a quid pro quo however, and the bankers didn’t think Pompey and his supporters were offering enough. So they orchestrated the threat of a democratic, lower-class uprising as a means of extorting Pompey to pay more. It was all a ruse and in the final analysis, the uprising never had a chance to succeed. It simply “wasn’t good business” (135).

In addition to showing politics as a vehicle of big business, Brecht’s representation of the Catilina affair also offers a sophisticated class-based analysis. This is particularly true of Brecht’s treatment of the question of slaves in the movement. The story makes the argument that, in order to work, it would have needed wide-scale slave support. However, this created tension between poor freemen among the movement’s ranks and the slaves. Ultimately, the poor freemen feared the potential competition from emancipated slaves more than they did the continued exploitation of the ruling classes. A potential alliance between the poor freemen and slaves against their mutual oppressors was, then, eschewed for the comfort of the freemen’s relative advantage over the slaves.

Throughout the book, those with a decent knowledge of German history will find numerous allusions to German figures and politics in Brecht’s representation of the Catilina affair. Because Anthony Phelan’s introduction to the book does a good job highlighting many, we can forego a lengthy discussion here. What is worth mentioning though is Brecht’s ideas about dealing with temporal locality in his depictions, something he called ‘historicising.’

In Brecht’s words, historicising “involves judging a particular social system from another social system’s point of view” (Brecht 1993, 82) so that “the social laws under which they are acting spring into sight” (Brecht 1964, 86). As we just saw, Brecht argued that material realities help to shape the behaviour of those acting within them. Included in this would be the entire universe of social relations. However, material conditions are ephemeral; therefore, people act differently at different times because they’re operating under different conditions. Because of changing material conditions, and the implications this has on social relations, events needed to be presented in relative terms. The point was to reveal their uniqueness. This applied just as much to past events as to present ones. The reason for this was that if the uniqueness of the event could be understood by the audience, Brecht theorised, it would see the event in new ‘unfamiliar’ ways leading the audience members to call into question why it occurred and to consider the idea that its occurrence was not inevitable.

In this book, Brecht portrays historical events in just this way. He compels its readers to ask questions about them and this, in turn raises questions about our own times. What material interests are at play? What are the given social structures that bound human interactions? What would be the human potential if those structures were altered? Brecht wanted his portrayals to help develop an intellectual approach to understanding the world that could contribute to social progress, something Brecht referred to as ‘the critical attitude.’ Ultimately, he reasoned, this would lead people to the conclusion that humans themselves are largely responsible for the construction of their own reality through the material conditions they set for themselves. In short, Brecht wanted his audience to understand “man as a function of the environment and the environment as a function of man” (Brecht 1964, 97) and that if we change our environment we can change ourselves.

Making this argument isn’t what makes Brecht an important Marxist thinker. The point is far from unique. However, Brecht didn’t just make this argument. He developed novel approaches to show people that this is the case. He tried to figure out ways that it could be represented and this is why he is a significant figure in Marxism. For those interested in the praxis dimension of Marxism, Brecht is an essential case study, if for only this reason. Although this book isn’t a complete source for understanding Brecht and all his ideas, it does provide clear examples of some of the more important elements of his social theory as they manifest in practice, as we have just seen.