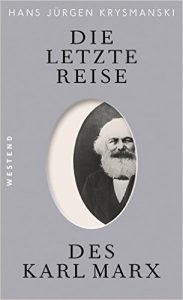 Palle Rasmussen is professor of education at Aalborg University, Denmark. Among his teaching is …

This small book chronicles and interprets the travels and life of Karl Marx during his last year, from January 1882 to his death in March 1883. In the Preface the author takes issue with the view found in most studies of Marx’s life and work, that this last phase of his life has little relevance for the understanding of his work. Krysmanski claims that during this year Marx made and had to reflect on new experiences, not least because for the first time he left Europe, spent some time in Algeria and had opportunity to observe life in colonial North Africa first-hand.

The author, Hans Jürgen Krysmanski, is a German sociologist, former professor at the University of Münster. He retired from this job more than a decade ago but is still active in research and debate. His most recent book before the one being reviewed here was a 2012 study of the financial elite entitled ‘The 0.1% – the empire of billionaires’, also published by Westend.

Marx’s life during this last year was very much shaped by his ill health and his attempts to improve it. He suffered from severe bronchitis and pleurisy, and his situation was no doubt worsened by the death of his wife in December 1881. The main cure recommended by doctors was to escape the polluted streets of London and spend time in healthier environments; and economic support from Engels made this possible. The first cure was a stay at Ventnor on the Isle of Wight, but after Marx returned to London his health again declined, and for a greater improvement Marx – like many other English middle-class patients – travelled to the mild and dry climate by the Mediterranean. Stopping in Paris to visit his daughter Jenny and her family he went to Marseilles and embarked on a steamer to Algiers, where he arrived on February 20, 1882. Algeria had been invaded and made a French colony some 50 years earlier. A contact had been found in advance, a lawyer named Fermé who had previously been active on the French left. He spent time with Marx and helped him with practical matters, including contact with a local doctor. After a few days in a hotel Marx moved to a small pension on the hillside above the town, Pension Victoria, which also housed 4-5 other guests, at least two of them also on cures. Here Marx stayed for two and a half months. He experienced some of the local sights and events, including the botanical garden and visits to the harbour by Russian and French warships. He followed the news through newspapers and exchanged letters with his family, Engels and others. In early May he sailed back to France where he stayed for three weeks at Monte Carlo, also a favourite resort for people from the north of Europe. After that he stayed for some time again with Jenny and her family outside Paris and then during September continued his cure in Vevey in Switzerland, this time together with his daughter Laura. By the end of September he returned to London, where he tried to resume work, but his health again declined and he once again went for a cure on the Isle of Wright. In January 1883 he lost one more family member as Jenny died of cancer. In March Marx himself died.

Marx’s life during this period is mainly documented through the letters that have been preserved (see MEW, volume 35). They contain many comments on health and the weather (because these two things were strongly linked) but they also record his impressions of daily life, especially in Algiers and Monte Carlo, and of people he met and talked with. His stay in Algiers has been thoroughly documented in an earlier book (Vesper 1995) with many details about the local environment and the persons Marx met.

Krysmanski’s book is not a historical study; rather it combines historical documentation with elements of fiction. The author incorporates fictional conversations, situations and even dreams that serve to highlight Marx’s thoughts and experiences in these new contexts and this phase of his life. On the factual level the account stays fairly close to what is known, but the fictional elements of course reflect Krysmanski’s interpretation and his attempt to link Marx’s experiences to his diagnosis of capitalism. The book was originally written as a film script, and it has retained a distinctive scenic character.

Krysmanski focuses mainly on Algiers, but there is also a chapter on Marx’s weeks in Monte Carlo and one on his return to London and death.

The chapter on Algiers shows Marx in different situations. He goes sightseeing in a horse cab together with Fermé; he enjoys the morning view from Pension Victoria over the town and the sea; he consults the local doctor; he writes to his family and to Engels; he tries to get on with the second volume of Capital even though the doctor has warned him not to work; in the warmth and sun he has his hair cut and beard shaved off, but makes sure to have a photo taken beforehand; he has social conversation and political discussions with other guests at the pension, especially a young woman named Vera Stirner.

Vera Stirner is a fictional character, developed from one of the guests who actually stayed at the Pension Victoria, a young women looking for job as a family teacher (Vesper 1995, 59). Krysmanski portrays her as an independent, politically interested and well-read German woman who has gone to Algiers following an unhappy love affair. She becomes Marx’s most important discussion partner; he lectures her on the mechanisms of capitalism and gives her a copy of Bebel’s book on women and socialism, but she also challenges his lack of attention to issues of women’s liberation. In Marx, Vera provokes complex feelings. On one hand her lively youth reminds him of his age and frail health; on the other hand her presence helps him to handle the grief over the death of his wife (41). Krysmanski lets Vera reappear at the end of his narrative; hearing about Marx’s grave illness she travels to London and is present in the home at Maitland Park Road in the weeks before and after Marx’s death.

The main theme in the chapter about Monte Carlo is Marx’s experience of the casinos which were also at that time the economic basis of Monaco. In a letter to Eleanor, Marx described life in the casinos with distaste, but perhaps also with some fascination (MEW 35, 328-9). Krysmanski develops this experience significantly, lets Marx discuss with regular casino guests and establishes a link to Marx’s economic theory. In his account the work that Marx brings with him to Algiers and Monte Carlo includes models on the working of financial capitalism, models that may allow interventions to hasten the breakdown of the system. In his room at Pension Victoria Marx writes a note: ‘I am almost so far that I have a method to accelerate exchange speculation so much that financial capital drives itself to absurdity’ (38). While in Monte Carlo Marx tests his method. Based on his predictions that the value of American railway stock will increase dramatically he invests a sum from his travel allowance and within two weeks makes a huge profit. The concept ‘casino capitalism’ starts appearing in his notes (64). After his death, when Engels (together with Vera Stirner) is going through his papers, they find the notes on exchange speculation. At first Engels dismisses them as ‘typical Marx play under the influence of rum’, but after a while he starts taking them seriously. However, they are not included in the second volume of Capital that Engels is editing; instead they become the basis of ‘a secret dossier, which from that time will have decisive influence on worker’s parties and the worldwide socialist movements’ (102).

The concept of casino capitalism was made popular by Susan Strange (1997) but the casino concept can be found already in Keynes’ General Theory and other economists who tried to make sense of the Great Depression. Marx never used it; but it certainly is an apt metaphor for crucial features of capitalism that he grappled with theoretically and that he and Engels scorned in private and public commentary. The idea of a secret dossier influencing socialist movements is of course fanciful and readers are left in the dark about what kind of influence Krysmanski suggests.

Mixing facts with fiction is a special genre and often controversial. I find that it works well in this case. Krysmanski portrays Marx as a complex person in a difficult phase of his life; but his interest is less in the personal aspects than in continuities and conflicts between personal experience and worldview. Describing Marx’s discussions with a young, politically aware women and his development of tools to make financial capitalism collapse are delightful exercises in imagination but also interesting highlights on his work and its implications. There are fictional elements whose significance I would have liked the author to spell out more clearly, but as a whole this is a book that I can clearly recommend.