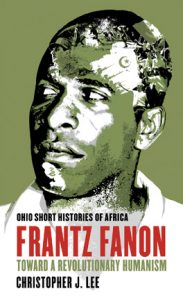 Frantz Fanon (1925-1961) is generally understood as a theorist of decolonization. His magnum opus The Wretched of the Earth (WOTE) and the preceding Black Skin, White Masks (BSWM) are considered excellent critiques of colonialism and often are prescribed as guidebooks by radical identitarian movements. A controversial and compelling writer, Fanon is widely read, but often misinterpreted. In Frantz Fanon: Toward a Revolutionary Humanism, Christopher J. Lee takes on the task of introducing a complex thinker in a short tract. Lee argues for a historical approach to Fanon, by placing him in the histories of Martinique and Algeria. While David Macey also uses a similar methodology in his magisterial biography Frantz Fanon: A Life (2002), Lee provides a whirlwind tour of Fanon’s life, ideas and context. Reading Fanon is relevant still, Lee argues, “because his utopian project remains unfinished.” (196)

It is important to contextualize Fanon. Throughout his political life, Fanon was an outsider. A Black Martinician in France, a French citizen in Africa, and one from a Christian background among Arab Muslims. Though he was fully committed to the Algerian anti-colonial struggle, he was never fully Algerian even in the eyes of his comrades. His grasp of pre-colonial Algerian history was hazy at best. Fanon’s writings clearly show that his understanding of Islam as a socio-political factor in Algeria was superficial and he viewed it only in instrumental terms vis-à-vis French colonialism. Anti-Black racism among Arabs, the Arab role in slavery, and Islamic patriarchy were subjects he scooted over. Lee concedes that “an uncritical triumphalism must be resisted with regard to assessing Fanon vis-à-vis Algeria.” (182)

A foremost critic of Western imperialism, Fanon breathed his last under the eyes of the CIA in an American hospital where he had come for treatment for leukemia. He died in late 1961; Algeria would win formal freedom the next year. Independent Algeria was wracked by civil war between the government and Islamists, killing more people than French colonialism. One could say Fanon was lucky not to have witnessed this – his wife Josie Fanon committed suicide anguishing over the degeneration of an anti-colonial project into a savage and cynical struggle for power. He remains a marginal figure in the intellectual imagination of both France and Algeria. However, from the 1980s he has had an academic rebirth in the Anglo-Saxon world, mostly in departments of postcolonial and race studies, where he is read mostly as a ‘Black’ thinker, an identitarian, a postcolonialist, or as an advocate/analyst of anti-colonial violence. Yet, what is most important about Fanon is his revolutionary universalist humanism, something both critics and admirers miss. Lee takes care to project this as Fanon’s core idea.

Even while claiming that Fanon belonged to a “black radical tradition” (197), to Lee Fanon transcended his origins “through identification with surrogate paradigms of identity and experience, to articulate what can be called radical empathy.” (191) Fanon’s radical empathy is defined as “a politics of recognition and solidarity with communities beyond one’s own immediate experience.” (191) When Lee associates Fanon with this sort of a radical universalism – which is explicitly Hegelian in its thrust – it compels one to question why Fanon should still be considered as belonging to a “black radical tradition.” Should one call Fanon a black thinker because he was a black man writing about black issues? My reading of Fanon suggests to the contrary, that he firmly resisted such identification. What is BSWM if not a cry against the pathology of reducing a person to his skin, whether black or white?

While Fanon has become a name that has been associated with violence, thanks largely to the interventions of influential critics like Hannah Arendt and supporters like the Black Power movement in the USA, Fanon himself had a guarded position as regards the potential of violence. It must be noted that his consideration of the emancipatory possibilities of violence occupies only one chapter in his entire works. On the other hand, the last chapter of WOTE is explicitly concerned with the pernicious psychological effects that random retaliatory violence can have on those participating in it. Fanon views violence in an instrumental manner, his approach to violence is more descriptive than prescriptive. This nuance is sadly missed by both Fanon’s liberal critics and his overenthusiastic supporters, black and white alike. Philosophers like Sartre and Walter Benjamin have produced more intensive works on violence; it does indicate some prejudice that their names do not provoke a spontaneous association with violence while that of Fanon’s does.

“Concerning Violence”, a recent documentary by Goran Olsson, a Swedish filmmaker too reinforces the ‘angry black man’ stereotype, albeit unwittingly. Olsson’s documentary takes select passages from The Wretched of the Earth to make a case against European colonialism. The Fanon we see here is an anti-European, who rejected all that Europe stood for. Yes, Fanon was genuinely angry towards the brutality of European colonialism, but he nevertheless believed that there was something worthy of redeeming in the European tradition.

Fanon writes in the Conclusion of WOTE – and this is a passage that the documentary conveniently missed – “All the elements for a solution to the major problems of humanity existed at one time or another in European thought. But the Europeans did not act on the mission that was designated by them.” These are not the words of a man who hated Europe; these are the words of a man who accused Europe of not living up to its own egalitarian values. This is a Fanon that neither the Right nor the Left recognize, and this is the Fanon desperately needed now. The “prophet of violence” who allegedly hated all things Europe is a person whom Fanon would have loathed. But one can suppose this is the fate that befalls all great thinkers. Nietzsche remarked that a martyr’s disciples suffer more than the martyr. What he should have added is that a martyr’s principles suffer most in the hands of his disciples.

Lee’s reading of Fanon provides a much needed nuance that is often missing when dealing with Fanon. “Fanon must be viewed not only as a critic of colonialism but a critic of postcolonialism.” (175) Arguably, Fanonism provides not just a compelling condemnation of the brutalities of European colonialism, but also a pre-emptive critique of the postcolony. While Fanon is most prominently used by the postcolonialists to denounce the alleged arrogance of European universalism, often they produce a narrative that excuses the worst excesses of nation-states in the Third World by attributing it to a hangover of colonial ideology. But this is an approach that Fanon scrupulously avoided, if the last chapters of WOTE are read diligently. And it is this Fanon that needs to be retrieved now – his “radical empathy” and universalist humanism do provide crucial insights on the several problems of identity that plague this century.