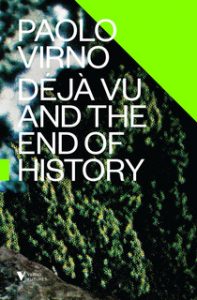 Paolo Virno
Déjà vu and the End of History

Rory Jeffs is a teaching fellow at University College, University of Tasmania. …

In response to the crises of contemporary times, much of philosophical discussion from the Left has turned toward themes of futurity, messianism, and rupturing events for a source of re-thinking revolutionary politics. A part of this turn has come about because of a crisis over the philosophical conceptions of historical temporality. It is with Paolo Virno’s book Déjà vu and the End of History that we find an intriguing and insightful discussion of how our thinking of historical temporality may be a part of our crisis itself. It is no coincidence that the translator has decided on the translation of Déjà vu and the End of History for Il Ricordo del Presente (literally: The Memory of the Present), given Virno’s book was originally published in 1999 when Francis Fukuyama, the last vocal proponent of the end of history argument, was still a primary target for the embattled Left. Since then, with the events of 9/11, the Global Financial Crisis and the Arab Spring, the problem of history is perceived to be less of a concern, with the likes of Slavoj Žižek heralding “the end of the end of history”. But why did the “end of history” take hold in the first place? Or, in what were the real circumstances that led to its apparition?

For Virno, interestingly enough, it did not simply arise because of a self-congratulating capitalist triumphalism or perceived end of ideology after the fall of the Berlin Wall. Virno’s book asks us to think of the problem of the end of history beyond its associations with a teleological or ideological logic imposed on the history of political events or the metaphysics of modernity, but rather as intimately tied to the nature of what he refers as “the memory of the present”. This ultimately means the end of history is a “state of mind” and “public pathology” that we can all fall capture too without consciously knowing it, and just like the experience of déjà vu, it is always possible at any moment. For this reason, Virno’s book proposes to develop “a new theory of historical temporality” which will “mount an offensive against” the end of history at a deeper level than has been made previously (33). Virno draws his conceptual energies for such an offensive in large part from Henri Bergson. In particular, he bases much of his argument on Bergson’s 1908 essay, ‘The Memory of the Present and False Recognition’, and generates a three-part revaluation of memory, time, and history that travels via thinkers such as Heidegger, Kojève, Nietzsche, Saint Augustine, Aristotle, Kant, and of course, Marx.

The premise of the first part of the book (‘Déjà vu and the End of History’) is that the mnestic phenomenon of déjà vu can, “cast new light on a canonical theme of historical-philosophical reflection, which is also a pervasive, overbearing state of mind characteristic of the contemporary forms of life. This philosophical theme – now also a recklessly advancing mood – is the theme of history stopping, or, more radically, the end of history.” (6-7). Virno’s theory of déjà vu is directly inspired by Bergson’s 1908 essay. It was Bergson’s contention that déjà vu was neither an anomaly of memory, nor a psychological pathology, but a symptom of “normal memory”. Bergson’s argument is strictly concerned with memory and how it, as the case of déjà vu presents, does not happen after the perception of any physical event or sensation, but is “contemporaneous with it” (11). Memory, is first of all, memory of the present; or as Virno paraphrases, “there is a perceived present and a present that exists in memory.” (13) However, Virno departs from Bergson’s analysis when he discusses déjà vu more directly in terms of historical temporality and in the context of “supra-personal memory”. Bergson argued that the problem of déjà vu is that it gives the subject a sense that the “future is closed” and this is caused by a lack of “attention to life”. Virno, instead asserts this reasoning is a circular one, and is not far from the issue that afflicted Nietzsche’s response to the “hypertrophy of memory” also being itself a threat to life (42-5). Rather, as Virno explains it, our way of coping with this excessive exposure to the simultaneity of memory and perception is to falsely recognise the present as an already-been moment by giving a “past-content” to the “past-form” of the present – déjà vu then is a coping rather than a life-denying mechanism (18). From characterising the end of history as a state of mind induced by a “false recognition”, Virno is able to depict current forms of life as representing a déjà vu-like existence, whether that be of political apathy, or the prevalent acquiescence to the proliferation of the “society of the spectacle” of global mass media and consumer culture, celebrating the “eternal present”, with a “post-historical inclination” of watching “already-performed actions” (55). Furthermore, consumerist lifestyle choices, such as collecting for instance, also exemplify for Virno this déjà vu state, as the collector “collect[s] their own life while it is passing, rather than living it.” (54-5) It is for this reason that Virno’s thesis can combine both Fukuyama’s end of history argument of neo-liberal capitalism’s hegemonic reign with the idea of the “postmodern condition” as in Baudrillard’s writings on the instantaneousness of information.

In the second part of the book (‘Temporality of Potentiality, Potentiality of Time’), Virno extends the analysis of memory to redefine the relationship between potentiality and actuality. Following Giorgio Agamben, Virno goes back to Aristotle’s Metaphysics as a way of undoing the logic of time that supposedly dominates the Western philosophical tradition and releasing potentiality (dynamis) from the Aristotelian teleology of actuality (energeia). But rather than take Agamben’s interpretation of the Aristotelian “impotentiality (adynamis)”, Virno wants to make the case that potentiality as an ontology of becoming stands in for “time as a whole” drawing from his earlier discussion of Bergson’s concept of the possible as meaning “the past in general”. Virno sees Aristotle’s problem as thinking that potentiality is “falling in time”, as chronologically preceding the act, whilst also holding that the act is the “prime mover” or telos of being. Potentiality can be nothing more than a vanishing mediator in this account. Virno argues to the contrary that potentiality is simultaneous to the act in terms of the chronological event taking place, but is before and after it in terms of a temporal order – therefore, potentiality is like the “memory of the present”. The “possible” (in Bergson’ sense) or potentiality is not anything that can be exhausted by the act itself, but neither can it be understood as something less real than what is given in the act. This explains why Virno’s primary examples of an inexhaustible potentiality are generic faculties, such as the faculties of language, intellect, labour, and pleasure – all of which remain faculties even after their actualisation or performance.

In Part Three of the book (‘Historical Materialism’) Virno becomes much more focussed on the concrete empirical aspect of the problem of potentiality when he discusses Marx’s notion of labour-power. It is capitalism as such, a historical phenomenon, which exploits the power rendered by this kind of potentiality, for instance by purchasing a worker’s labour-power, rather than their actualised or “objectified labour”. Here we see a reading of Marx’s “labour in general” taken from the Grundrisse inflected by influence from the theory of immaterial labour characteristic of Italian Post-Marxism that Virno represents, along with Antonio Negri. However, what is most striking in this last chapter is the discussion of “meta-history” and what Virno believes determines what makes a historical event possible in the first place. As Virno explains an ontological potentiality as the source of meta-history, he directly challenges the historicist phenomenological account of historical temporality present in Heidegger and Kojève, and would arguably influence post-structuralism. Kojève and Heidegger are given special attention because, for them, historical time is conditioned by an awareness of one’s mortality and finitude. For Virno, death itself is not what gives birth to historicity, or for that matter, a finite limit to history. Virno even says counter-intuitively that an immortal person could still be considered to lead a historical existence so as to oppose the link between historicity and death (152). However, to overturn the reign of the primacy of the future on our sense of temporality delivered by phenomenology, he appears to presuppose the reign of the “primacy of the past” as an unrealisable potential. With this supposedly new framework, for a historical moment to happen, there only need be the dual directionality (“before” and “after”) and an incompleteness to it (142). This explains in part why Virno moves away again from dynamic concrete examples such as labour-power and concludes on the example of religious meta-history and sacred time in ritualistic practice, with reference to the writings of Ernesto De Martino. Religious meta-history, unlike that represented by capitalism or phenomenology, fully recognises and preserves – without exploiting it – the staying power of potentiality.

The advantage of Virno’s analysis is that it demonstrates how potentiality is structurally intrinsic to historical temporality and that makes it relevant for a discussion of the link between history and memory and the problem of déjà vu or repetition. The arguable disadvantage would seem to be that, due to Virno’s meta-historical argument, it radically loosens the links between historical materialism and any emancipatory historical narrative it seeks to develop (i.e. progressive history, or the historical anticipation of a future totality). Virno’s analysis would appear to imply there no final telos or structural totality can be permitted if the world is one of endless potentialities – for historical time could not really exist if this were the case. Virno’s offensive offers us then to enter a philosophical battle over time whilst the political consequences of such a battle appear unclear, and for all we know, the price of endless possibilities may turn out to be no future at all.