Marx & Philosophy Review of BooksReviews‘The Existentialist Moment: The Rise of Sartre as a Public Intellectual’ reviewed by Alexander Blanchard 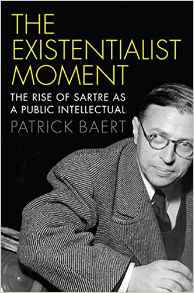 Patrick Baert
The Existentialist Moment: The Rise of Sartre as a Public Intellectual

The foremost task of a new book on Jean-Paul Sartre is to justify itself. No doubt that is the task of any new book in academia where there is the persistent drive for finding ‘gaps in the knowledge’. But this especially seems to be the case for a thinker who has already been subjected to innumerable evaluations covering all aspects of his life and oeuvre, and who has, by and large, been widely regarded as démodé for a good few decades now.

Indeed, if the name Jean-Paul Sartre is of any meaning at all to the present-day undergraduate student, then it is likely to recall little more than the image of that stout, diminutive man, one-eyed and forever smoking a pipe. By the end of his life Sartre’s political interventions had grown tardy, unwarranted, unwanted, or confused. His writing had become, implausibly, more bloated and abstruse, and he had developed an overwhelming obsession with completing his obscure three volume Flaubert biography (largely unreadable, largely unread). This, along with his poor health, and a little Sartrean arrogance, prevented him from engaging in contemporary theoretical debates around the rise of the social sciences in France.

This obscurity is a shame, for as Fredric Jameson (2014) has noted “younger readers are still electrified by the descriptions of Being and Nothingness and readily acknowledge the phenomenological and philosophical truth of its accounts of freedom”. But therein lies a paradox. It is precisely the attractiveness of his work which leaves one puzzling over his relative obscurity today. And the above biographical considerations, whilst explaining the decline of Sartre’s output, hardly explain why those of his works which had been so enormously popular failed to retain that popularity after his death, particularly given the fame he achieved in his lifetime.

It is precisely in explaining this paradox, and the manner in which it is explained, that makes Patrick Baert’s The Existentialist Moment: The Rise of Sartre as a Public Intellectual so compelling and so readable. The approach here is a sociological one, and it is the socio-political climate within which Sartre flourished which will be analysed, in conjunction with his works and his philosophy, to explain a central, two-folded question. First, there is the question of timing: why did Sartre and his ‘existentialism’ gain such rapid and widespread acceptance, with such a popular following, in France between 1944 and 1947 (with these dates Baert challenges the commonly held belief that Existentialism flourished during the inter-war years) – why at that particular time, neither before nor after? Second, there is the question of content: why was it precisely Sartre’s existentialist movement that so successfully gained popularity? Those who have read – or read parts of – Being and Nothingness will know how obscure Sartre’s writing could be. What’s more, an indebtedness to Hegel and Heidegger gave Sartre’s work something of a German flavour, whilst Heidegger had himself been tainted by his proximity to Nazism. Why, then, was it not some other philosophical movement which took on that mantle which Sartre so enthusiastically acquired?

Principally, it was the events of World War Two (WWII), the traumatic French experience of it, and the need for a palliative upon its cessation, which made Sartre and his existentialist moment. The quick surrender of France to Germany, the occupation, collaboration, and the values of the Vichy regime brought about a significant transformation of the cultural and intellectual field. A schism developed between, on the one hand, those of a conservative disposition who promoted work, fatherland, and discipline, a solid and stable moral order, Catholicism, and, crucially, collaboration; and, on the other hand, those who espoused ‘liberté, égalité, fraternité’, silence in the face of the occupier, and resistance. No doubt, this division sat along lines which had endured since at least the Dreyfus affair – and one wonders whether this enduring division might not challenge the primacy Baert gives WWII in his account of Sartre’s rise – but under conditions of occupation they were made even more stark, and the German occupiers, along with the Vichy regime, ensured the predominance of the more conservative faction. When the war ended and France was liberated the collapse of the Vichy regime, along with the favour granted to conservative, pro-German intellectuals, created something of a vacuum into which Sartre was only too happy to step.

If, however, the French experience of WWII made Sartre, there is also a sense in which Sartre made the French experience of WWII. There were undeniable fabrications. In his text ‘What is a collaborator?’ Sartre fell in line with the de Gaulle interpretation of the collaboration: most French citizens were resistance fighters, they were active against the occupiers; the collaboration itself was carried out by a few marginal characters on the periphery of French society, hankering after a strong, external force so that they might position themselves at the centre. This is far from the truth. The Vichy regime was composed of many well-integrated, elite, members of French society. Well established artists and academics contributed to pro-German and pro-occupation journals. And the average French citizen, like those of most countries throughout Europe, were content with making the best of the occupation. It must be remembered that Sartre himself, something of a spokesman for the resistance, was at best a peripheral figure, at worst an imposter. One recalls how, during the liberation of Paris, Albert Camus found Sartre asleep in the stalls of an empty theatre: “Your armchair is facing in the direction of history!” Camus exclaimed, presaging the idea of the armchair intellectual with which he would later ridicule Sartre. Baert himself does present one or two reservations about Sartre’s resistance activities, but really, on the whole, we are presented an image of Sartre as something of a resistance hero – an image quite hard to accept. Yet, true or false, that is besides the point. Sartre provides the moral vocabulary, the French swallowed it – willingly.

Baert’s book is to be commended. There is no doubt that he sufficiently addresses the problem – how to account for Sartre’s rise – with which he begins the book. It is compelling and presents something of an advance on previous sociological-type studies of Sartre. However, as well researched and full of insight as Baert’s book is, it does, in places, become somewhat repetitive. The material is stretched a little too thinly and the final chapter, ‘Explaining Intellectuals: A Proposal’, which is supposedly meant to justify the study of Sartre (the ‘foremost task’ with which we began), feels rather as though it were meant to justify the length of the book. In this regard, potential readers may wish to read Baert’s two articles ‘The power struggle of French intellectuals at the end of the Second World War: A study in the sociology of ideas’ (2011) and ‘Positioning Theory and Intellectual Interventions’ (2012), before taking up this more extended study.

One thing that goes unexplained in The Existentialist Moment is how Sartre’s stunning rise came about in spite of the near-hegemony of Marxism and the Communist Party in France at the time. As Baert himself writes, “[i]n the aftermath of the Second World War the Communist Party occupied a prominent role in French politics. It had accumulated a considerable amount of kudos from its central position in the Resistance, leading, in the short term, to electoral success and, more durably, a significant role in the public sphere” (154). The Communist Party were antagonistic towards Sartre, accusing his philosophy of being ‘bourgeois’, lacking an assessment of intersubjectivity or ideology (the famous lecture ‘Existentialism is a Humanism’ can be read partly as a response to these charges). What was it that Sartre offered the French, in their trauma, which was distinct from the Communist Party? Given the Communist Party’s position at the end of the War, what additional factor contributed to Sartre’s rise in spite of their popularity? Baert does describe how the later Sartre came to adopt a Marxist vocabulary with the use of notions such as ‘class struggle’ and ‘false consciousness’ (119, 126) and tried to integrate existentialism with Marxism (151) – unsuccessfully, in the opinion of many – but this takes place in the 1960s, when Sartre’s popularity was thoroughly in decline.

In Les Mots Sartre tries, through an intricate exegesis of his formative years, to express how he was formed (if only so he can condemn it). In one way Les Mots can be seen as an attempted answer at a particular impasse in his earlier ethics before his courting of Marxism. If the structure of consciousness is a radical freedom, and if we are totally free to choose our projects, our acts, our values, then why is it that we must undertake such an act at a given time. The victim under torture could always have, hypothetically, held out for another second and refused the confession – why does one individual give in at one moment, and another individual gives in at another moment? Ultimately Sartre seems to suggest that we can never fully explain the moment at which we give in to facticity and give up authentic action, and that we can only paint an incomplete image of an individual which might give us some fragmented account of such a choice.

I mention this only because it seems to hint at the challenge of presenting an ‘explanation’ for a life, or a moment in that life. The Existentialist Moment helps to elucidate the concrete historical moment of Sartre’s prominence, but it does not elucidate Sartre. How was Sartre the sort of person who could, almost omnisciently, read and respond to the public mood in the manner he did? Why did his philosophy, largely developed prior to WWII, resonate with the public in the aftermath of WWII? Yes, Sartre presented his philosophy in a somewhat favourable way, but he adapted it only superficially, not absolutely. One feels that there are explanations for Sartre’s rise, the Existentialist Moment, which far predate the French experience of WWII. And yet, this is no criticism of Baert’s excellent book because, really, it only highlights the challenge of capturing the impressive and enigmatic figure of Sartre, who himself tried to elude explanation.