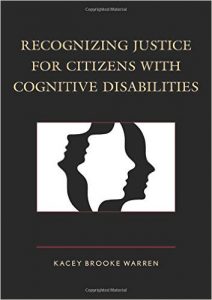 Kacey Brooke Warren’s Recognizing Justice for Citizens with Cognitive Disabilities is a concise, accessible introduction to various liberal political theories and the extent to which they are inclusive of citizens with cognitive disabilities.

The book is in three parts. The first part, ‘Liberalism and Cognitive Disability’, introduces the reader to the problems posed to liberal theories of justice by the lives and experiences of cognitively disabled persons. Here, Warren outlines three problems that those with cognitive disabilities ‘will predictably have’ (33): medical impairments (like heart defects and seizures among persons with Down syndrome); social and political exclusion (like normalizing educational institutions that exclude or work to the detriment of many with cognitive disabilities); and stigmatization (like the stigmas that supported eugenics policies toward the ‘feeble-minded’ in the United States). In this part, Warren also introduces the two criteria she will use to evaluate theories of justice. First is the presumption of political equality. That is, an adequate theory of justice will give citizens with cognitive disabilities basic rights that are equal to those of other citizens, and it will give citizens with cognitive disabilities equal political consideration. Thus to address the predictable problems of those with cognitive disabilities, an adequate theory of justice must provide equal treatment for those with medical impairments, for those who are socially or politically excluded, and for those who are stigmatized. The second criterion is the liberal standard of justification, according to which an adequate theory of justice must be justifiable to all those to whom it is applied. After some brief critical remarks about original position reasoning, Warren introduces two methods for meeting this standard of justification, wide-reflective equilibrium and overlapping consensus.

The first part of the book stands out for a variety of reasons. First, Warren is admirably sensitive to the variety of cognitive disabilities and differences in the experiences of cognitively disabled persons. Second, it clearly and concisely explains and circumscribes the problem she seeks to address throughout the rest of the book. Indeed, she offers helpful explanations of her liberal theoretical background that are accessible to those relatively unfamiliar with John Rawls, but that also engage with relevant literature for those well versed in Rawlsian liberal theory.

The second part of the book, ‘Four Approaches to Justice for Citizens with Cognitive Disabilities’, contains four chapters, each of which evaluates a particular theory of justice according to the criteria discussed in Part One. Each chapter summarizes the concepts being applied from previous chapters, and thus they are suitable to be read independently, especially for those interested in the relation of cognitive disability to a particular theory of justice. First, Warren discusses Rawls’s ‘justice as fairness’ and related developments, especially those by Sophia Isako Wong. Here she argues that justice as fairness does not offer equal political consideration to citizens with cognitive disabilities, and that Rawls is motivated to be exclusive in this way largely to legitimate his conception of justice to the majority of (non-cognitively disabled) persons. Interestingly, Warren agrees with Rawls’ latter concern, namely that a theory of justice must address the concerns of ‘those who contribute with less hope for recompense’ (73). I will return to this point.

Second, Warren evaluates Martha Nussbaum’s capabilities approach. Here she argues that this theory of justice does offer greater political consideration to those with cognitive disabilities than justice as fairness. However, she notes two particular concerns. First, there is a worry that in establishing a species-norm or ideal of functioning, Nussbaum may end up reinscribing the disrespect to which disabled persons (that is, those who do not conform to this ideal of functioning) are subject. Second, Warren argues that the justification Nussbaum offers for her theory is circular.

The third chapter in this part discusses Eva Kittay’s care ethics, specifically her concept of ‘doulia’. As in the previous chapter, Warren argues that Kittay’s theory is more inclusive of those with cognitive disabilities than Rawls’, but here again she has lingering concerns. First, she worries that that Kittay’s focus on inevitable dependency, while being more inclusive of those with the most profound cognitive disabilities and their caretakers, may exclude those with less severe cognitive disabilities. Second, Warren raises a concern about Kittay’s suggested principle of justice: ‘To each according to his or her need for care, from each according to his or her capacity for care, and such support from social institutions as to make available resources and opportunities to those providing care’ (116). This raises the ‘free-rider’ problem for Warren, that is, the concern that it is not justifiable to those who are capable of contributing to surrender their resources to those who are unwilling to contribute even though they are capable.

The fourth and final chapter in this part evaluates Axel Honneth’s ‘differentiated recognition’ as a theory of justice. Here Warren argues that of all the theories she considers, this is the most inclusive of cognitively disabled persons. As in the chapters on Nussbaum and Kittay, Warren questions the ability of Honneth’s theory to meet the liberal standard of justification, but she finds that, of the theories discussed, it is best able to defend itself.

The final part of the book contains the concluding chapter in which Warren develops a method of justification that she believes is best suited to include citizens with cognitive disabilities. This is a method based on trust, transparency, and transformation. For Warren, a theory, policy, or practice is trustworthy if it respects ‘the most important aspects of her identity’ (182). However, one can experience these things as trustworthy even if they do, perhaps unbeknownst to the person, disrespect her identity. Thus it will be important to render the justification for beliefs or practices transparent. Only when those justifications are transparent can they be evaluated as ‘genuinely shared’ or ‘untrustworthy’ (183). Indeed, in conclusion, Warren suggests viewing Honneth’s principles of recognition – need, equality, and achievement – as socio-historically specific starting places for identifying, or making transparent, cases in which identities are disrespected. Through continual testing, additional principles could be identified, or the principles themselves could be transformed. Warren believes that this discursive testing could and should be inclusive of those with cognitive disabilities.

Warren’s book is admirable for a variety of reasons, but one assumption that runs throughout the book strikes me as potentially problematic. As previously discussed, Warren is sympathetic to the concern that nondisabled persons will have about ‘free-riders’ if theories of justice or political policies are too lax or offer too much assistance to those in need, particularly disabled persons. She writes of Kittay, for example, ‘“To each according to his or her need for care” and “from each according to his or her capacity for care” does not assign any moral value to contributing and those who are perfectly capable of contributing might have excessive needs’ (132-3). This assertion is surprising, since it is precisely a revaluation of caring labor (the relevant contribution) that Kittay seeks, and it is unclear how a person could have ‘excessive needs’. Similarly, throughout the first part of the book, Warren frequently mentions the ability of persons with cognitive disabilities to be ‘contributing’ or ‘productive members of society’ (17, 26). At the same time, however, she aims to address the social and political exclusions to which cognitively disabled persons are subject. This raises a worry: is Warren, here, neglecting the role played by capitalism in generating social and political exclusions for cognitively disabled persons, or perhaps more profoundly, in generating disabilities themselves? Many scholars in the field of disability studies, including Susan Wendell, Michael Oliver, Brendan Gleeson, Lennard Davis, and Robert McRuer, have variously argued that contemporary workplaces, capitalism as a mode of production, or neoliberalism play significant roles in constructing disability (including cognitive disability) through the expectation of standardized, ever-more-demanding labor. Taking the insights from such authors seriously, to what extent can the social and political exclusions of cognitively disabled persons be addressed in a discourse that insists upon productivity and worries about ‘free-riders’? Might not these exclusions be better addressed by questioning the language of ‘productivity’ or rejecting the expectation of ‘contributions’ than by reaffirming the ability of some with cognitive disabilities who are currently not seen as contributing to contribute? To put this in terms of the liberal standard of justification Warren uses throughout: when contemporary social structures expect the labor of certain minds and bodies and exclude those minds and bodies that do not conform, it may be impossible to justify accessibility and inclusion for the latter to the former because the expectation of contribution (according to which conforming bodies and minds are coerced into labor) is precisely that which generates the exclusion of disabled persons. Perhaps the method of achieving transparency and transformation Warren discusses in the final chapter could be used to make the root of these exclusions transparent, but this would mean returning to the theories rejected on the grounds of justification, namely care ethics, for renewed consideration. To be sure, Warren’s explicit aim is to remain within ‘the liberal tradition’ (18), so perhaps these questions would necessarily push her analysis beyond this tradition.

At any rate, Warren’s book is an important and unique contribution to political philosophy and disability studies. Readers will find in Recognizing Justice for Citizens with Cognitive Disabilities a most sustained and thorough analysis of the ability of contemporary theories of justice to address the concerns of cognitively disabled persons. It is recommended for philosophers and those in disability studies.