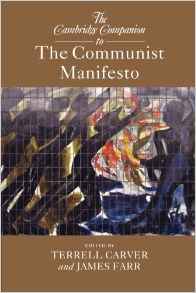 This is a valuable collection of essays that offers a diverse set of readings and insights into one of the most explosively affective short texts ever written. The volume includes a new translation into English of the first edition of 1848 as well as the earliest English translation by Helen Macfarlane that appeared only two years later.

The first of the four parts into which the book is divided looks at the political and biographical context, beginning with the subversive Rhenish radicals who took from the French Revolution the idea that society could be transformed for the better. The second chapter, by David Leopold, provides useful background information for the relatively neglected section three of the Manifesto, looking at the contempories of Marx and Engels who also wrote on the seismic economic and social changes going on in their times but who failed to advance a communist agenda. The Manifesto was a polemical call to arms: not, says James Martin in chapter three, ‘a treatise on politics’ but an intervention whereby ‘its arguments are its politics’. Hence its style – urgent and hortatory – and its authors’ deployment of principles of classical rhetoricians that they had read in the original as part of their own Gymnasium education. Martin’s essay is a little disappointing in that it does not build on this insight to highlight the sheer frisson of Marx and Engel’s prose, the electrifying imagery and dramatic tropes of a fiery speech act which continue to make the Manifesto an exciting and powerful text as well as a literary masterpiece.

The second part of this collection, entitled Political Reception, gets off to a solid start with Jules Townshend looking at how the Manifesto fared as Marxist ideology developed around the world and across historical times. Kautsky and Lenin both claimed fidelity to the Manifesto, with events after the October Revolution seeing a discarding of proletarian self-emancipating in the face of existential threats to the new state; Mao’s communism follows a similar trajectory. A chapter by Emanuele Saccarelli argues that events in the second half of the nineteenth century vindicated the economic analysis of the Manifesto even though political affairs took a more uneven and sometimes contradictory course, conflicting vectors that were reflected in arguments about the permanent revolution. Saccarelli looks at ‘a little known polemic’ between Ryazanov and Plekhanov to show how the legacy of the Manifesto was contested and how Trotsky continued this debate with his claim that the nature of the bourgeoisie had changed since Marx’s time, turning into a reactionary force that required a change in the response of the proletariat.

The bourgeoisie was a revolutionary class for Marx and Engels, resembling ‘the sorcerer who could no longer control the unearthly powers he had summoned forth’ (240), and in Leo Panitch’s essay this is one part of the uniqueness of the Manifesto; the other part of its uniqueness being the prophecy that the proletariat would become a revolutionary class. Cynics may continue to retort that what makes the bourgeoisie class revolutionary is its continuing ability to de-revolutionize the very people whom Marx and Engels thought would inevitably overthrow their oppressors. Since 2008, however, the world economic crisis has reaffirmed the truth of the Manifesto’s claim that with each capitalist crisis the worker ‘instead of advancing with industrial progress, sinks ever deeper beneath the circumstances of his own class. The worker becomes a pauper, and pauperism develops more quickly than population and wealth’ (245). What remains the problem today is how the working class could or should organize itself in order to effect its promised role as the `gravediggers’ of capitalism. For Panitch, this points to an unsolved tension that persists in Marx’s writing after 1848 and which arises from the conflicting pressures of wanting the proletariat class to self-advance into a political party and the need for a determining role by a party in the ‘formation of the proletariat into a class’ (246). The second part of this volume concludes with a pertinent piece by Joan C. Tronto, one of the two women in this set of thirteen contributors, noting that women make only a ‘cameo appearance’ in the Manifesto in what is a ‘masculinist manifesto’. A part of the rhetorical appeal Marx and Engels make to working-class men is that capitalism threatens the traditional basis for the family and by losing their chains they will rediscover their masculine power as protectors of women: ‘The specter of a gender and sexual revolution remained for the future’ (148).

Part three looks at the intellectual afterlife of the Manifesto, its legacy in liberal political theory from Bertrand Russell to John Rawls and which includes, pace post-2008, a growing acknowledgement that its prediction of the globalization of capital is more prescient than ever. Globalization is the concern of Manfred B. Steger’s essay and he focuses on David Harvey’s work in this area, in particular his essay ‘Globalization in Question’, while also drawing attention to the value of Bob Sutcliffe’s ‘The Communist Manifesto and Globalization’ (1998), Löwy’s ‘How Up-to-date is the Communist Manifesto?’ (1998), Chu Van Cap’s ‘Marx and Engels on Economic Globalization’ (2002) and others. This is now more familiar territory than ever and is related no doubt to the increasing realisation that the global market is scarring our lives in ways that would have had Marx reaching for new figures of speech – the bourgeoisie as cannibals, perhaps, rather than gravediggers – although, given the Manifesto’s dystopic vision of a world governed by brutal exploitation, he would not have been unduly surprised by what is happening.

The final essay, Elizabeth Anker’s ‘The Manifesto in a Late-Capitalist Era: Melancholy and Melodrama’, is a suitable finale to this collection given the way it attends to the form of the text that Marx and Engels penned in 1848 and relates it to contemporary leftist critical theory. She identifies the form as melodrama – ‘dramatic events using moral binaries of good and evil, innocent victims … virtuous people, overwhelmed by nefarious forces, who overcome their domination’ (215) – and traces its repetition in the work of Agamben and Hardt and Negri. Capital as the villain that turns human values into ones of exchange is a trope that can be traced in political critiques of our times but the melodrama is accompanied by what Benjamin called ‘left melancholy’, a disavowal of what has been lost that comes from refusing to admit that the space for revolutionary emancipation seems more diminished than it was in the past. What we have, in Benjamin’s own melodramatic wording, is ‘a clenched fist in papier-mâche’ (quoted 222), a gesture of revolutionary intent but reified by its hollow centre, making the Manifesto the lost object that melancholy refuses to come to terms with. In melodrama, the victims become heroes when they realise their revolutionary potential but in Agemben the modern citizen, homo sacer, is a lost soul who remains lost. In Hardt and Negri, the multitude threatens Empire but only as a marginalized echo of Marx’s proletariat. What is missing in these thinkers is the Manifesto’s call for collective action through a communist party and a vision that looks to an unknown future, not a nostalgia-inspired glance backwards. Anker’s remark in her final paragraph, ‘The Manifesto is thus not a melancholic text, and refuses to generate a lost past ideal as a model for the future’ (231), is a suitable way to conclude a rich collection of essays that locate the Manifesto in its historical setting while resolutely not failing to draw attention to its continuing relevance to present times.