Marx & Philosophy Review of BooksReviews‘The Mythology of Work: How Capitalism Persists Despite Itself’ reviewed by Benjamin J Anderson 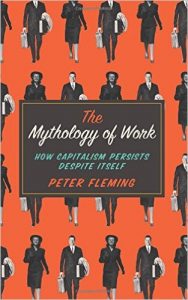 Peter Fleming
The Mythology of Work: How Capitalism Persists Despite Itself

On a recent excursion away from my desk a colleague left a note in my copy of The Mythology of Work: How Capitalism Persists Despite Itself. “I’d like to see this guy [Fleming] try to work a forge in the middle ages” wrote my office-mate, suggesting – if you will allow my interpretation – that Fleming’s critical, sardonic take on the contemporary world of work fails to acknowledge that work today is a site of relative privilege when compared to the hard labour of past epochs. It is slightly amusing that this remark actually reflects what Fleming identifies as a central problem of work today: the imposition of work ideology in the neoliberal era. This ideology is, Fleming’s argument goes, a form of naturalized technical rationality that is unquestionable and sits at the core of inequality.

The neoliberal work mythology is characterized by a variety of intersecting trends: individuation, flexibilization, casualization, internalized discipline, and managerialism. Fleming tackles each of these in short order, revealing a work landscape in which the seeds of solidarity are both hidden and foreclosed. Today’s worker no longer questions the regime of work but, rather, finds herself isolated, precarious, and wholly dependant on a relation to work that colonizes the lifeworld and reduces the subject to an occupation. More, this relation is seen as natural and unavoidable; it is the way of the world and resistance is useless.

Fleming credits the rise of such an ideology to the neoliberal rewriting of history, a view that acknowledges the historical struggle for survival that resulted in human labour but that projects this struggle into the present through a simulated survival impulse mediated by the imposition of scarcity even in an age of abundance. “While most work is now needless,” Fleming explains, “neoliberal society has made good use of work’s ontological connotations to keep a lid on a fundamental antagonism that defines modern life” (21). This antagonism? A class struggle reinforced through the internalized discipline of socially unnecessary work, a phenomenon that the author likens to a pathology and addiction. More than this, however, this natural imperative turned compulsion also mirrors our collective relationship to debt. Debt, in the author’s view, is a tool through which the ruling class is not only able to discipline the poor, but through which the poor can be compelled to self-discipline, reinforcing precarity and enclosing non-work time.

In this complex enclosure of life, which extends the logic of the social factory, work is assimilated into identity formation. More, it is a central characteristic of how we see ourselves – what Fleming calls the “I, Job” function: we are what we do. This concept is particularly observable when we consider the recent cult of the entrepreneur. The popular view of the entrepreneur is of a self-motivated creative in charge of his own destiny. His ingenuity and hard work set him up for success and respect. The author guides the reader past this popular assumption explaining that “behind the gloss of the ‘entrepreneur’ is actually sanctioned poverty, insecurity, precarity and an impossible life-structure designed to absorb the externalities of rich corporations and the neoliberal state” (39). Although the author never directly unpacks this, one need only consider recent workforce restructuring to see this process in action. The caterer, housekeeper, truck driver, etc. who until recently enjoyed a secure job with a major corporation might now find her entire division cut. Facing unemployment, this worker is often forced into entrepreneurship, providing the same service to the same firm but without the safety net of benefits or a long-term contract. Entrepreneurship, one can reason, is often code for enforced flexibilization.

So, what of my colleague’s concern about Fleming’s critique of a less shitty labour environment? Beyond the fact that it misses the point and oversimplifies a complex ideological process, it also fails to recognize the harsh reality that characterizes work today. “Hard labour is a thing of the past (at least in the global north)” it seems to suggest. It is true that I – and likely Fleming – enjoy a great degree of privilege in the work that I do. This privilege does not exist in a vacuum, however. It depends heavily on global inequality in what Fleming refers to as the “planet of work.” It is true that Fleming’s exploration is primarily concerned with work in the Western European and North American context. This said, he makes tidy work of drawing the connection between the labour aristocracy and the backs on which its position rests. Following Deleuze, Fleming conceives of the global totality as a society of control in which “The absolute ‘worst off’, that part of the whole we like to consign to the status of an exception or aberration, is really what gives the totalized system its false positivity. Its part is the part of everything” (71). Whereas my colleague seemingly charges that the author has it easy, this is precisely because others have it hard. The global productive apparatus is one of inequality wherein the slave or low-wage labour of the “worst off” fuels the privilege of those of us with the leisure to question the situation. In not doing so, the privileged worker bows to the command of the dominant ideology and fails to realize her place in the reproduction of this global system of inequality.

Resistance to this naturalized status quo, for Fleming, takes the form of biopolitical rejection of work conditions and the neoliberal work ideology. Specifically, the author, following the work of the Invisible Committee, highlights desertion, death, sleep, and illness as sites of ideological refusal. In this section, the reader is encouraged to imagine a world of work that is divorced from exploitation, instead informed by a desire for fulfillment and self-valorization. In lieu of such a world, the worker is left with a handful of strategies to resist, ranging from absenteeism due to sickness (or the imitation thereof), through the the escapism of sleep and rejection of 24/7 capitalism, to the refusal of life best illustrated by the Foxconn suicides earlier this decade.

This is not a particularly hopeful prescription for resistance, but it is also not a call to despair. Illness enjoys a particularly thorough treatment and the reader is challenged to consider the ways in which it might present a challenge to work discipline. First, it carves out a space between work and reproduction wherein subjectivity can be exercised from without that binary. Ultimately, illness becomes a space for critical reflection: “From under the bedcovers, we begin to note that our obsession with work is a rather conceited, manufactured disposition with little bearing on social functionality. Illness allows us to regain perspective” (126). More, Fleming describes the social contagion that reawakens communitarian impulses and reconnects workers with the collective – sick time is realized as community time. However, it is in the illness of the superior where we observe its strongest emancipatory characteristics. When the boss is sick we simultaneously enjoy a period free of surveillance and an opportunity for extra-hierarchical solidarity where the superior might also experience the emancipation and critical reflection of a period of escape.

Fleming closes by outlining a number of proposals that have the potential to push us toward a post-work society. These include a basic income above the living wage, a post-state participatory democratic system of societal organization, public absorption of private enterprises, a three- day work week, a dramatic slowing of the massifying trends of globalization, and, finally, a non-monetary incentive system. These are, of course, sweeping reforms the like of which would seem untenable to even the most progressive of neoliberal apologists. This said, the author creates this list in order to inspire imaginative and achievable alternatives to the alienating world of work specifically and to our myriad global crises more broadly. In sum: “…we require a different way of seeing the seemingly universal nature of a social construction that ought to be only a minimal part of life – instead, it has connected itself to everything” (199). Resistance to such an onslaught requires both refusal and imagination and Fleming leaves us to decide between the monotonous domination of the ceaseless present and the creative emancipation of collective rejection.