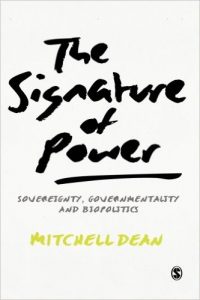 In The Signature of Power, Dean sets out to sketch the outlines of an ‘analytics of power’, by which he means a set of ‘perspectives and concepts that help us understand how power relations operate’ (1). This promising objective notwithstanding, anyone who looks to this book for a set of analytical tools with which they might interrogate a specific set of power relations will find themselves disappointed. These pages contain thought-provoking reflections on contemporary political theory, but they do not result in a conceptual toolbox for the student of power. Rather, they articulate a series of insights into the question of which philosophical methods an analytics of power should be able to employ, but it does little work in terms of developing these methods themselves.

The “signature” that the book’s title speaks of describes what Dean calls ‘a kind of permanent movement or reversibility between two poles’ (12) that marks the concept of power. (Dean borrows the word “signature” from Giorgio Agamben but uses it in an entirely different way [see 4].) The concept of power, in other words, cannot be theorised or even engaged with without mysteriously demanding to be expressed in or as a set of oppositions: “power to” and “power over”; power as “capacity” and power as “right”; transcendental “sovereignty” and immanent “government”; “constituent power” and “constituted power” (12). The rest of the book is concerned with tracing how the concept of power has been thought and rethought over the past century, all the while referring back to this signature, this “bipolarity” that hides at the heart of the Western understanding of power.

Dean’s strategy is to discuss three late modern theorists of power and to evaluate their relative success in recognising the signature of power. These theorists are Michel Foucault, Carl Schmitt, and Giorgio Agamben. By discussing each in turn, Dean seeks to show that in their attempts to conceptualise power, each inevitably gets caught in its oscillatory nature. He moreover seeks to show that ‘all three thinkers have sought to escape’ (221) the signature of power, but that from their failure to do so – a failure necessitated by this very same signature of the concept of power – political theory can learn valuable lessons.

Dean’s odyssey starts with Michel Foucault, who is credited with having provided ‘a general framework for critical thought and action since the crisis and decline of Marxism from the 1970s’ (19). In his desire to develop an analytics of power that could break free from the restraints of classical theories of power, Foucault, in Dean’s reading, developed a series of hugely fecund notions (biopolitics, governmentality, discipline, etc.), but these notions were always ‘sketched against the theory, imagery and practice of sovereignty’ (24). This is where Dean sees the signature of power at work: Foucault wanted to do without a theory of power that is under the spell of sovereignty, but found himself time and again developing notions that are opposed to sovereignty – that could, in other words, function as the negative pole of sovereign power. Foucault’s desire to do away with the sovereign model led him, according to Dean, to develop a model that tried to deny one of the two poles of the concept of power altogether and ultimately led to ‘the “immanentism” of post-structural approaches to power and state power’ (133, cf. 91). Such an “immanentist” model effaces the transcendental pole inherent in power and will therefore necessarily be incapable of understanding power in full: ‘We need a version of immanence-transcendence that is both able to account for government and its economies and the claims of sovereignty’ (97).

It is in his discussion of Foucault’s work that Dean’s argument is least convincing. Especially noteworthy is that in order to argue that Foucault sought continuously to escape the signature of power, Dean is forced into a position where he has to speculate on the reasons for Foucault’s introduction of certain notions and his interest in certain themes and problems. Such an endeavour necessarily requires conjecture and as a result Dean is coaxed into suggesting – to give but one example – that Foucault took up the analysis of ordoliberalism in 1979 ‘in the hope of an exculpation of past sins’ (56). The past sins Dean has in mind are Foucault’s earlier flirtations with a critique of the state that ‘bears an uncanny resemblance to’ (55) the “state-phobia” he perceives in ordoliberalism. The point here is not that Foucault’s earlier understanding of power does not resemble the ordoliberals’ (which surely is a moot point); the point is that this argument relies heavily upon a speculative claim concerning Foucault’s reasons for studying ordoliberalism. It is, however, an argument necessitated by Dean’s desire to show that Foucault sought to escape the signature of power.

In chapters 5 and 6, Dean’s discussion shifts to Carl Schmitt, who is studied because his theorisation of power is exactly the opposite of Foucault’s. Schmitt’s great concern is precisely the transcendental pole of power, and according to Dean his work is marked by a profound recognition of the signature of power; in fact, ‘Schmitt’s work positively celebrates and revels in’ the ‘production of binaries, distinctions, antinomies’ (125). In tracing Schmitt’s oeuvre, Dean therefore focuses upon the friend-enemy distinction (102-6), the opposition between liberalism and democracy (111-5), and the favouring of sovereignty over government (120-3). But if Foucault privileged the immanent, then Schmitt is guilty of doing the contrary and, accordingly, in his work ‘privilege [is] given to reign, sovereignty, legitimacy and democracy over governing, economy, legality and liberalism’ (126). And, again: ‘Schmitt’s conceptualization of power remains as rigid, dogmatic and authoritarian, as much as Foucault’s was restless, elusive and anarchic’ (161).

The two final chapters, chapters 7 and 8, engage in a reading of Giorgio Agamben’s writings on glory, economic theology, and the governmental machine. The focus on Agamben does not come as a surprise. Indeed, the very terms of Dean’s project and his style of writing bear an unmistakable resemblance to his work. Agamben’s theorisation of power is framed as ‘an explicit attempt to deal with the signature of power that produces an understanding of power as composed of either, or both, a “transcendent” juridical-institutional pole of sovereignty and an “immanent” economic-governmental pole of the power over mundane life’ (166-7). As such, it develops a set of tools and raises a series of questions with which political theory can force the signature of power into the open: it alerts us to the necessity of interrogating economic theology (and broader questions of secularisation), of inquiring into glorious acclaim and publicity, and of developing a ‘political morphology of the event’ (226). Seeing as these notions are relatively unfamiliar to political theory, it is worthwhile seeing Dean explain their relevance to contemporary analyses of power.

Like Foucault and Schmitt before him, Agamben is ultimately dismissed because even though he ‘has come closest to understanding the signature of power’, in Dean’s reading ‘he seeks to escape this signature just as much as’ (216) the others. It is Agamben’s desire to render “inoperative” ‘all governmentality or all economic and governmental ordering or organization of society’ (215) that arouses Dean’s suspicion. To be sure, Agamben’s attempt to escape the signature of power does not translate into a failure to analyse successfully both poles of the concept of power, but it does mean that we have to ‘[put] to one side his radical politics’ (218).

Dean arrives at the conclusion that ‘[t]he signature of power, which all three thinkers have sought to escape, must be maintained from an analytical point of view’ (221). Therefore political theory must today be equipped with an analytics of government as well as ‘a historical sociology of sovereignty and law’ (224). If it continues to seek to escape the mysterious signature of power, it will only give rise to more ‘cul-de-sacs, and in this sense failures’ (234), as the projects of Dean’s three privileged authors are finally characterised.

The Signature of Power is comprised of a set of interesting readings in contemporary political theory. Its main conclusions about the study of power today demand recognition and attention. The book is at its strongest when it presents in a very accessible style the highly complex ideas such thinkers as Foucault, Schmitt, and Agamben articulate and their relevance to the theorisation of power. Dean’s greatest weakness is that his desire to construct an argument about these three theorists often gains precedence over the development of a conscientious and meticulous reading of their texts. As a result, Dean’s argument often straddles the line between rigorous political theory and less-than-rigorous anecdotal reasoning, and Dean often relies upon conjectural and biographical evidence to make his claims. The trouble here is not so much that there is no such thing as a protean bipolarity at work in many theories of power (although the claim that power necessarily harbours such a bipolarity is a strong one, and makes one wonder how this hypothesis applies to, for example, dialectical, liberal, or anarchist accounts of power), but that Dean seeks to show that his main interlocutors all “sought” to escape it somehow. The argument would, in my view, have been more convincing had it, on the one hand, relied solely upon textual analysis and philosophical exegesis, and had it, on the other, pertained more to the actual thought of these authors than to their supposed intentions.