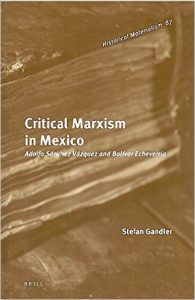 Stefan Gandler’s volume Critical Marxism in Mexico investigates the radical political philosophy of two twentieth-century exiles who became naturalized citizens of Mexico: the Spanish Marxist Adolfo Sánchez Vázquez (1915-2011) and the Ecuadorean leftist Bolívar Echeverría (1914-2010). Focusing on Latin America, this text places at its center the philosophical and practical critique of Eurocentrism. Indeed, the German Gandler envisions the book as being an initial step toward “overcoming Eurocentric bigotry,” and he declares that he is “profoundly convinced that Eurocentrism in its ‘philosophical’ and general forms […] is one of the principal reasons for the current disaster that humanity is living through at the global level,” considering its responsibility for vast material suffering and for repressing alternative forms of social organization. Given that Eurocentrism underpins capitalism, the critique of Eurocentrism in turn forms a central pillar of the “critical Marxism” developed by Sánchez Vázquez and Echeverría, in terms of their repudiation of the racism and positivism evinced at times by Marx, Engels, and many who have claimed Marxism. This alternative Marxism is critical also in that it is anti-Stalinist, non-Marxist-Leninist, relatively libertarian, and non-dogmatic.

Sánchez Vázquez is more practical, more revolutionary, and more based in Marx’s philosophical-humanist early writings than Echeverría, his fellow radical exile who took up residence in Mexico City in 1968, nearly three decades after Sánchez Vázquez arrived there as a refugee fleeing Franco’s victory in Spain. According to Gandler, the trajectory of Sánchez Vázquez’s life demonstrates that of the self-emancipation of a formerly orthodox socialist from intellectual error without his becoming a reformist or apologist or “forgetting the radical critique of everything existing which would be unthinkable without Marx.” For Sánchez Vázquez, theoretical knowledge depends on social transformation through praxis, defined by Marx in the “Theses on Feuerbach” as “revolutionary, practical-critical activity.” Theory, in Sánchez Vázquez’s view, “cannot exist […] without reference to praxis.” The Spanish thinker considers Marx’s very emphasis on praxis the German communist’s philosophical revolution, as summarized in the well-known final thesis: “The philosophers have only interpreted the world in various ways; the point is to change it.” Such immersion in Marx’s early writings strengthened Sánchez Vázquez’s resolve to resist the Soviet Union’s corruption of Marxism, as seen in the philosopher’s critique of Diamat in his 1955 masters thesis, and his resignation from the Communist Party following Khrushchev’s revelations at the Twentieth Soviet Congress (1956). The Cuban Revolution, the Soviet Union’s suppression of the Prague Spring, and the Mexican student movement of 1968 greatly moved Sánchez Vázquez. His doctoral dissertation and book Philosophy of Praxis (1967) provide a libertarian presentation of Marxism that is critical of Marx, Lenin, and their followers. Such an unorthodox interpretation led Sánchez Vázquez to be criticized precisely by Marxist-Leninists such as the Cuban Jorge Luis Acanda Gonzalez, who condemned the thinker in 1988 for denying the “importance of Lenin’s political & philosophical legacy” and advancing “practical and spontaneous conceptions of the revolution.” Yet Sánchez Vázquez’s very stress on praxis—echoing Marx—led him to become one of the foremost intellectuals of emancipation of his time. He engaged with the Sandinista Revolution in Nicaragua and focused his late efforts on Marxism and aesthetics, identifying the need for “a new sensibility, a new audience, a new aesthetic attitude” to be cultivated in post-revolutionary Cuba and more broadly. Sánchez Vázquez summarizes his philosophy in his 1985 autobiography, declaring that “socialism […] continues to be a necessary, desirable, and possible alternative.”

In contrast, Echeverría tells Gandler that, while he “agreed fully” with Sánchez Vázquez’s “critical vision of Marxism,” he was not his contemporary’s follower or disciple. Whereas Sánchez Vázquez privileges emancipatory consciousness and praxis, Echeverría focuses more on ordinary consciousness and is skeptical about the possibilities of praxis. For this reason, for him, it is more a “question of discovering political possibilities within alienation.” Influenced by Heidegger, Echeverría traveled to West Germany in 1961 to study with him, for he considered the phenomenologist to be “the true revolutionary” philosopher. Gandler rightly takes issue with Echeverría’s failure to recognize Heidegger’s enthusiasm for the 1933 Nazi takeover of Germany, in parallel to the thinker’s questionable reflections on the destruction of the Berlin Wall in 1989. In addition, Gandler discusses Echeverría’s questionably uncritical stance on the USSR, situating it as being typical of the Latin American left at the time, which considered the Soviet Union a necessary counterbalance to US imperialism. Nonetheless, despite these problematic aspects, Echeverría developed a revolutionary concept of the intellect, which he believed must “abandon the European-bourgeois principles and ideology to complete philosophically the definitive process of decolonization, which is demanded practically by the dominated classes.” In this sense, the Ecuadorean philosopher considered Marxism “the “philosophy of workers’ struggle, the culmination and overcoming of all metaphysical European traditions.”

Yet to the matter of the fall—or, rather, destruction—of the Berlin Wall that took place on November 9, 1989, Gandler criticizes Echeverría for his perceived celebration in the Cuadernos Políticos he edited of the smashing of the “anti-fascist protective barrier,” as it was known in East Germany, on the fifty-first anniversary of Kristallnacht. In contrast to the dominant narrative of that historical event as being liberatory or anti-authoritarian, Gandler frames it as the action of a hysterically reactionary, State-sanctioned mob that sought to tear down an “unwanted monument to the millions” murdered in impunity by the Nazis. This lucid and challenging assessment yields at times in the text to questionable endorsements of the claims made by Daniel Jonah Goldhagen in his book Hitler’s Willing Executioners (1996) regarding the putatively enthusiastic participation of tens of thousands of ordinary Germans in the genocide of the European Jews (Ha’Shoah), as based in the idea of an “eliminationist anti-Semitism” supposedly deeply-rooted in German civilization and Christianity. These historical distortions about German participation in the Holocaust have been refuted adroitly by Norman Finkelstein and Ruth Bettina Birn in their Nation on Trial (1997), and it is unfortunate to see Gandler resurrect them within a revolutionary analysis of genocide. Nevertheless, continuing in this sense, he shares Echeverría’s moving commentary on the Shoah as being, rather than merely “an accidental holocaust provoked by a madman,” the “result of a failure of the Left itself: the excessive sacrifice to be paid by the social body for the triumph of the anti-communist counter-revolution in the Europe of bourgeois civilization.”

In light of the genocides for which capitalism bears responsibility, the notion of praxis takes on a special urgency. In the “Theses on Feuerbach,” Marx defines praxis as revolutionary because it “transforms reality.” The stress that Sánchez Vázquez places on this category echoes that previously made by Gramsci, who referred to Marxism in his Prison Notebooks as the “philosophy of praxis” in order precisely to recognize the centrality of revolutionary activity to this philosophy. Praxis poses a great threat to authority, capital, and the State precisely because it represents the ever-present risk of the “spontaneous rebellion of the oppressed and exploited” beyond the strictures of the Iron Cage. As Gandler declares, “[t]he concept of praxis […] contains an element of rebellion against all those who, from their desk, from the Party headquarters, or from the workers’ fatherland, aspire to lead the activities of the rebels of all countries.”

In parallel to Sánchez Vázquez’s emphasis on praxis, Echeverría contributes to the deepening of a non-dogmatic Marxism by criticizing Marx, Engels, and many of their followers for their ethnocentrism, naïve progressivism, and determinism—this, while dialectically acknowledging the clearly emancipatory and revolutionary analyses pervading Marxian analysis. After all, as Gandler stresses, it was Marx’s horror at “the destruction of human existences, of children, of the populations of entire regions” that led him to “pic[k] up his pen and wr[i]te Capital” (1867). Yet Marx and Engels, particularly early on, held racist views that are not totally inseparable from their overall method: in 1849, after the U.S. defeated Mexico and appropriated the Southwest, Engels hailed the result, which he considered to have been “waged wholly and solely in the interest of civilization,” as California had been “taken away from the lazy Mexicans, who could not do anything with it.” Moreover, Marx and Engels employed anti-Slavic prejudice during their struggle against Mikhail Bakunin and the anarchists in the First International—doubtless in part in response to Bakunin’s own Germanophobia—while both Marx and Bakunin are known for their anti-Semitic comments, however much worse the latter’s were.

For his part, Echeverría uses Marxist analysis to theorize that the oppressed countries of the Global South are not in a “pre-capitalist phase,” but rather that they have been fully subjected to capitalism since its birth. In this sense, all the world’s countries are capitalist, but the system of accumulation requires differing levels of industrialization and political power for different regions. Moreover, the philosopher takes issues with the deterministic, mechanical interpretation of history that Marx and Engels bequeathed to the world, and he outright claims Revolution to be a modern myth and a mirror-image of bourgeois delusion. Thus, whereas he clearly identifies the twentieth century as the “era of unprecedented genocides and ecocides” and wishes for an egalitarian universalism of all peoples, Echeverría is left with only conceptually envisioning the chance for a non- or post-capitalist modernity.

Perhaps a combination in the surge of realistic-romantic sentiments can help explain the recent election of Trump, bolstered by white nationalism—while Clinton and Obama’s concession speeches could be considered expressions of the classic ethos. Yet Echeverría can justly be critiqued for reducing Romanticism to an approach that naturalizes capitalism and oppression, for it certainly has served to propagate liberatory impulses. Writing in the text’s prologue, Michael Löwy is right to declare that the Romanticism of Jean-Jacques Rousseau, Friedrich Hölderlin, William Morris, Ernst Bloch, and others is hostile to capitalism, not integral to it.

In sum, Gandler has provided his readers an illuminating investigation into critical Marxism, the necessity of praxis, and the critique of Eurocentrism. Yet the question must be raised, as the author does, of just how anti-Eurocentric it is to explore the thought of two intellectuals—one of them Spanish—who focused above all on European writers. This doubt notwithstanding, in a world in which the Western core-imperial societies are lurching evermore to right-wing reaction, fascism, and “open-self destruction,” it may well be the case, as Gandler asserts, that only movements from the periphery will be able to stop the capitalist death-train. It is to be hoped, then, that resistance elements in imperialist countries can join with their international comrades to advance the cause of critical Marxism or libertarian socialism, which “continues to be the most fertile theory for those of us who are convinced of the need to transform the world in which today there exists not only the exploitation and oppression of [humanity] and peoples, but also a mortal risk for the survival of humanity [and nature].”