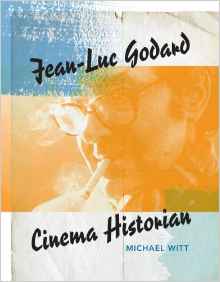 The object of Michael Witt’s detailed monograph Jean-Luc Godard, Cinema Historian is Jean-Luc Godard’s project to produce a history of cinema and television fabricated through audio-visual montage. The result was a set of film essays titled Histoire(s) du cinema, released by Gaumont in 1998. The book is about the inception of this project; its place within and its relationship to thirty years of Godard’s work, prior and parallel to the project’s production; Godard as a historian; the historical role of cinema and its relationship to television.

Histoire(s) du cinéma had its origins in the late 1960s; in 1976 Godard and the film archivist Henri Langlois announced a joint project for an audio-visual history of cinema that would be co-written and directed and related on film and video cassette, although this plan was abandoned. Witt discusses Godard’s impetus to understand and develop his own artistic practice as a filmmaker and his preoccupation with how the forms he employed were originally constructed: the methods and techniques of silent film, Godard believed (an example is Sergei Eisenstein’s Battleship Potemkin (1925)), had been lost. The project had a definite autobiographical element. Witt compares the final result to Marcel Duchamp’s work Boîte-en-valise, a portable museum of reproductions that Duchamp produced between 1935 and 1940, and he views it as an expression of Godard’s gratitude to the medium.

Witt challenges the conventional understanding of Godard as just a director of feature films, discussing him as a multimedia poet, philosopher, critic and essayist and graphic artist working within an expanded cinema. The bibliography lists Godard’s books, talks and interviews, and articles and collages. Witt argues for the continuity of Godard’s output, although he does break his working practices into two major movements separated by Godard’s encounter with video. The first movement involves Godard’s discovery of cinema, his involvement in the French New Wave and his 1960s engagement with political modernism and a Brechtian critique of the society of the spectacle that concludes, for Witt, the ‘political dead end’ of the early 1970s. Histoire(s) du cinéma is at the heart of Godard’s more subjective and autobiographical practice marked by an exploration of video technology, his collaboration with Anne-Marie Miéville of 1973-1984 that functions as preparatory research for Histoire(s) du cinema, and the desire to resuscitate early cinema’s simplicity and immediacy.

Witt’s first chapter is a history of the origins and development of Godard’s project to investigate cinema history. Godard puts forward a “theorem” regarding cinema and history: cinema is the historian of the twentieth century and the past is never entirely dead because it reappears in the form of images. Histoire(s) du cinema is a film on the history of cinema and the representation of twentieth century history through film. Witt provides a map of Godard’s epic: Histoire(s) du cinéma is divided into eight titled parts of varying lengths that weave, Witt comments, a sumptuous audio-visual ‘tapestry’ made from clips from films that shaped Godard as an artist, television, radio, and still images. Histoire(s) du cinéma primarily samples four categories of film: silent film, the work of auteurs like Chaplin, Bergman, Renoir, Rossellini, Welles and Hitchcock – a director who had uniquely achieved montage – postwar French and American cinema and Godard’s own films. There are four two part chapters in total. The first part of the first chapter, 1A, Toutes les histoires, condenses the themes that run through the whole series that include a narrative of cinematic decline and resurrection, the vitality of cinematic forms, and artistic change and renewal. Godard’s work had been pervaded by the idea of the decline and eventual death of cinema since the mid-1960s and Histoire(s) du cinema shows cinema seduced by ‘narrative, sex, and spectacle’ betraying its heritage as a popular documentary based art. Dialogue and narrative displaced montage according to the demands of the culture industry and cinema then betrayed its own documentary function in failing to testify to ‘the central cataclysmic event of the twentieth century … the unbearable horrors of the holocaust’ (127). For Godard, with few exceptions (Chaplin’s The Great Dictator, (1940)), an ‘anaesthetized’ cinema had abdicated its original documentary responsibilities, although he saw a partial return of this function in Italian Neo-Realism exemplified by Rossellini’s Rome Open City (1945).

Witt discusses the genealogy of Histoire(s) du cinéma’s audio-visual manipulation and Godard’s earlier exploration of video. The medium offered economic, ideological, and aesthetic advances and functioned ‘as a quasi-scientific tool for the processing of found images and sounds’. Video enabled Godard to manipulate images more easily and ‘think’ in and through them; an idea that Witt returns to. As well as the technological conditions of the project, Witt considers Godard’s artistic and intellectual influences, the book discusses in depth and seeks to emphasise Godard’s relationships and engagements specifically as a poet exploring the possibilities of ‘genuine communication’. Philosophers of history like Charles Péguy and Walter Benjamin who believed in the ‘centrality of poetic imagery to the fabrication of history’ (76) guided Godard theoretically and methodologically. He took from Péguy a model for ‘intuitive, poetic, anti-positivist historical writing’ (77) and identified closely with the situation of the angel of Benjamin’s ‘Theses on the Philosophy of History’ (1940) inspired by Paul Klee’s ink and chalk drawing Angelus Novus (1920), purchased by Benjamin in May 1921. The angel is unable to achieve his desire to mend the wreckage historical progress leaves in its wake: like Godard through the technique of montage, Benjamin’s angel of history desires to intervene and redeem the rubble of the past; for Benjamin and Godard, the past is never irrevocably lost because of its possible afterlife in images. Witt introduces Benjamin to describe the practice of montage through which Histoire(s) du cinéma is made and Godard’s theory of the image based on the connection and reconciliation of different realties.

André Malraux was also important to the development of Histoire(s) du cinéma. He offered ideas of artistic creativity as sacrifice and transfiguration, artworks as by-products of the human condition, and metamorphosis, in which past art, the films and images Godard quotes and samples, juxtaposes and combines, is reinvented for the present. Godard liked how Malraux experimented with the juxtaposition of images in his art historical studies that became a model for a kind of ‘poetic visual thinking’ underpinning Histoire(s) du cinema: Malraux’s methodology, which compared fragments of works, and which was made possible by photographic reproduction, ‘afforded Godard a crucial glimpse of the possibility of a poetic, visual approach to the composition of history’ (88). For Witt, Godard’s theory and practice of the historical image, influenced by Benjamin and Malraux, and evoked by the myth of Orpheus, evolved from his practical exploration of film as essentially montage.

Witt considers the deep influence of Langlois as a ‘visual thinker and poet-historian’, a precursor to the method of Histoire(s) du cinéma and as a ‘montage artist’ in the mould of Benjamin, Malraux, or the Soviet director Sergei Eisenstein. Godard admired the montage techniques of Eisenstein and filmmaker Dziga Vertov’s use of found footage influenced Histoire(s) du cinéma’s construction. Godard defined an authentic cinema in terms of montage – it is the combination of sounds and images that actually defines the originality and inventiveness of cinema – and this true cinema only exists when it is the result of a ‘collective thirst for a national self-image’ (140). As such, Godard had ambivalent relationships with different national cinemas: he dismissed the existence of a British cinema which, because of Hollywood’s linguistic proximity, never developed into a meaningful articulation of the experience of the nation in cinematic form, as Godard believes a national cinema should. For Godard, there was no popular need for a specifically British cinema because of the popularity of the English language films made in Hollywood.

Witt’s sixth chapter examines Godard’s critique of television and the medium’s relationship to Histoire(s) du cinema. The rise of television and technical and aesthetic decline of cinema features prominently in Godard’s cinema: his critique of its impact and effects began in the explicitly politically engaged films he made under the name of the “Dziga Vertov Group” such as British Sounds, (1969) Pravda, (1969) and Luttes en Italie (1971). Godard also attempted to work within television but he was highly critical of the superficiality of the medium compared to the ‘true poetic images’ of film, describing it in terms of radioactivity and contamination. Godard’s critique is based on television’s rejection of cinema’s original discoveries and its reliance on language: Histoire(s) du cinema associates television with “unlearning” how to see and the dulling of human perception; we do not identify in the same way with television broadcasts as we do with cinema, which constructs images worthy of life that promise self-discovery. Godard characterized television as ‘mild cultural Nazism’ and related the rise of Nazism to its technological development. Witt describes Godard’s connection of the birth of television, Nazism, World War II and the collapse of European cinema as ‘provocative’.

Witt’s comprehensive study concludes by affirming the worth of Godard’s historical project: Histoire(s) du cinema is ‘a milestone in multimedia film thinking and historiography’ that invites further experimentation, that has the potential to influence the methodologies of professional historians. It is a ‘fundamentally inspirational and productive’ work for Witt, ‘a bonfire of the art of the past, but also a time capsule filled with traces of films, evidence of a lifelong passion for cinema, and a record of the secret of cinematographic montage’ (211) to be inherited by future generations of young directors of the far future.