Marx & Philosophy Review of BooksReviews‘The Myth of Liberal Ascendancy: Corporate Dominance from the Great Depression to the Great Recession’ reviewed by Serdal Bahçe 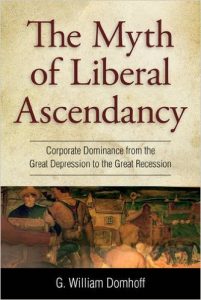 G William Domhoff
The Myth of Liberal Ascendancy: Corporate Dominance from the Great Depression to the Great Recession

Serdal Bahçe is an Associate Professor at the Department of the Public Finance, Ankara …

William Domhoff’s The Myth of Liberal Ascendancy is a daring attempt to correct the idea that the liberal-labor coalition had the strength to dictate its own terms to the corporate-conservative coalition during the New Deal, and in the so-called Keynesian era. As a corollary to this historical narrative, the attack of the corporate-conservative alliance against organized labor, and the liberal hegemony over the economy, has been taken to only date back to the first half of the 1970s, and especially to the Nixon years. While objecting to this version of history, Domhoff indicates that the corporate-conservative alliance was solidified during the pre-New Deal years, and from then on this alliance, with few exceptions, fortified its dominance.

In order to demonstrate the corporate-conservative dominance, Domhoff begins with the identification of major influential groups at the corporate level and in the political domain. As the major figure in his revised history, the corporate moderates and their once-upon-a-time prominent organization, the Committee for Economic Development (CED), played an important role in the formation of economic and social policies at least up to the mid-1970s. Domhoff benefits a great deal from CED reports, which also reflect the turmoil on the side of the corporate community and organized labor. Moreover, he defines two opposing groups in the political domain; the conservatives incorporate almost all the Republicans and most of the Democrats from thirteen southern segregationist states. On the other hand, the spending coalition includes a majority of Democrats from across the country. The compositions of two opposing groups point to the fact that Southern Democrats had been the Achilles Heel for both coalitions, and tended to shift their allegiance depending upon the conditions. For the sustainability of the segregationist policies and the restraint upon the unionization of agricultural laborers, they joined forces with the conservatives while they acted with non-Southern Democrats on issues like subsidies and benefits for planters.

The boos is organized historically so that each chapter corresponds to the presidential terms of the successive US Presidents. The details of the book show that this is not an arbitrary choice. Moreover, in the evaluation part of each chapter, Domhoff uses three inter-related indicators to assess the extent of the realization of the objectives of the liberal-labor alliance. These indicators are income inequality (the Gini coefficient), effective tax rate and the unionization density.

The first Roosevelt period, 1934-1938, marked by the Democratic dominance in both houses of Congress, provided a framework for a short-lived rise in the liberal-labor alliance. However, with the fear from ongoing strikes, the Southern Democrats shifted their allegiance to the corporate conservatives. Till the beginning of World War II, this coalition blocked many initiatives by the Roosevelt Administration and the liberal-labor alliance. The extent of the New Deal policies was successfully limited to the rehabilitation of banking and finance. On the other hand, in the second Roosevelt era, 1939-1945, with the spurt given by the World War, a military Keynesianism was pursued. This inevitably increased the bargaining position of the liberal-labor alliance, and stimulated allegedly pro-labor and liberal policies. However, the details provided by Domhoff indicate that the initiative did not come from the liberal-labor alliance. Rather these policies were shaped by the protracted conflict between the Roosevelt administration and moderate corporates organized in the Committee for Economic Development (CED). From this period onwards, up to the first half of the 1970s, corporate moderates seemed to take over the leadership of the business community. With the necessary mobilization of war resources, effective tax rates were raised, union density increased and inequality of income diminished significantly.

Just after World War II, the successive administrations and the economic ruling coalition came under dual pressure. On the one hand, the ultraconservatives aimed to turn the clock back to the 1920s, which meant the reduction in tax on corporate profits, the decrease in public spending, and a parallel decrease in income tax rates. On the other hand, moderates opted for a more moderate reflection of a more conservative Keynesian approach. According to this view, even though the level of public spending and tax rates rose to unprecedented levels because of the war, they should be reduced to a lower rate. In opposition to both the above approaches, the liberal-labor alliance demanded a more radical program by aiming to preserve war-time levels of tax rates and public spending, which would eventually have brought about a more interventionist state.

Enter the cold war. The Soviet threat across the globe directed the administrations to pursue a more Keynesian global economic agenda. Just after the war, ultraconservatives and moderates to some extent demanded a recourse to monetary policy instead of an expansionary fiscal policy. However, the US, as the lead imperialist had been forced to increase military spending in order to contain the Soviet threat and to intervene in the regional revolutionary wars.

The Truman era, notwithstanding heated debates, was likely to be an extension of Roosevelt era. Even though income inequality continued to decline, unionization density fell initially before it began to grow again. However, effective tax rates were reduced, but not to the range demanded by the corporate community. On the other hand, the corporate community succeeded in the enactment of the famous Taft-Hartley act which significantly put restraints upon unionization and the ability to organize strikes. During the Eisenhower years, the Korean War induced an increase in military spending, and this turned out be the major factor behind the short-lived economic boom. In this period, even though the liberal-labor alliance achieved some minor successes on the issue of social security, the conservative corporates exerted strong pressure. The Kennedy years seem to have been the most successful era for the moderates. Beginning in the previous period, a broad and vigorous debate about the wage-price guidelines continued in the Kennedy years. In this debate, conservatives strongly opposed to such a plan which entitles the government to set the guideline for wage and price increases. According to the conservatives, this proposal would certainly reinvigorate the spectre of an excessively interventionist state. During the Kennedy era, anti-segregationist protests broke out. This generated an internal conflict both for the corporate conservatives and moderates, as well as in the labor movement. Some craft unions and some industrial unions displayed a hesitant attitude for the sake of preventing a revival of racial enmity among white workers. Even though the Northern Democrats and a part of the Northern Republicans were supportive of the demands of the civil rights movement, the majority of the Southern Democrats remained adamant in opposing the anti-segregationist polices.

During the Kennedy and Johnson periods, the US economy achieved the highest average growth rate for the post-War years. The Kennedy-Johnson era expansion was the direct result of military intervention in the Vietnam revolution. The influence of the corporate moderates over the economic policy making apparatus continued during both the Johnson and Nixon years. The institutionalization of Medicare and Medicaid in 1965 was seemingly a great success for the liberal-labor alliance. However, as Domhoff ironically underlines, the operating principles of Medicare and Medicaid were different from the ones laid down in the original proposals of the liberal-labor alliance. Corporate intervention limited both their scope and aim. During the Kennedy-Johnson years, the inequality of income was reduced to its historical lowest level while the unionization density continued to fall.

The Nixon years, on the other hand were marked by more corporate policy successes, but also by economic collapse and political disarray. The inflationary dynamics created an openly conflict-ridden environment in which the corporations and labor clashed over a number of issues. In this environment, the corporate moderates also turned to the right, and this fertile ground gave way to the foundation of the infamous Business Roundtable which displaced the CED for the leadership of the corporate community. With the Nixon administration abolishing the Bretton Woods system, conservative Keynesian policies began to fall from favor. The liberal-labor alliance was too weak to resist and the Carter interregnum proved the non-viability of the prolongation of US Keynesianism. Moreover, the demarcating lines dividing the corporate moderates and conservatives became increasingly blurred. The social and political set up was ripe for a conservative counter-revolution, and the Reagan administration took the steps long aspired to by the corporate conservatives.

Domhoff’s book doubtlessly provides invaluable evidence indicating the historical weakness of the liberal-labor alliance and the fallacy in the liberal-labor ascendancy thesis. In this respect, this book contributes to the analysis of the historical and social roots of the Keynesian epoch and uncovers the real factors lying beneath the post-war socioeconomic order both at domestic and global levels. The book reaches a number of conclusions. First, US Keynesianism was the outcome of the efforts and the influence of corporate moderates, instead of being the result of the victories of the liberal-labor alliance. In this respect, instead of being concessions to labor, Keynesian policies were implemented as a response to the urgent needs of the capital accumulation. Moreover, even in the periods in which Domhoff’s pivotal indicators developed in favor of labor, the structural tendencies of US Imperialism, namely domestic and global monetary expansion, were the main determinants. In this context, it is highly paradoxical and ironic for US labor that good times have coincided with the increased military intervention of the US imperialism.