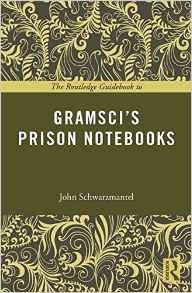 Antonio Gramsci’s Prison Notebooks (PN) is a classic text of twentieth century political and social thought, exerting considerable influence on contemporary debates in political philosophy, as well as theory and history of ideology, international relations, and cultural studies. At the same time, the text is complex and often difficult to read, especially without background knowledge of its historical, philosophical, ideological, and intellectual context and influences. A detailed guide to this work is therefore more than welcome. John Schwarzmantel has published widely on citizenship and identity, ideology and politics, and, crucially for the topic discussed here, he co-edited (with Mark McNally) a volume on Gramsci and global politics (Routledge 2009).

In the introductory chapter, ‘Gramsci before the Prison Notebooks’, Schwarzmantel explains Gramsci’s political career and his writings before his imprisonment in November 1926. He also reminds us that Gramsci started writing his notebooks in February 1929, and ‘filled twenty-nine notebooks (school exercise books) with his reflections on history, politics, philosophy and culture, as well as four notebooks filled with translations from German, English and Russian texts, which Gramsci used as language exercises’ (2). Schwarzmantel briefly explains Gramsci’s (often polemical) use of Marx and Marx’s writings in his early journalism, and stresses that the Sardinian’s early focus on Marxism should be understood ‘not as a form of economism in which politics was determined by economics, but of Marxism as precisely the expression of human will and creative action’ (6). This approach was developed in PN as the famous philosophy of praxis. The introduction shows Gramsci as a political actor ‘situated in the milieu of the Italian and international communist movement, and grappling with problems of how to organize the working class movement in a period of capitalist reaction’ (28).

In chapter two, ‘The Nature and Genesis of Gramsci’s Prison Notebooks’, Schwarzmantel discusses the key themes and originality of the text, he stresses that the Notebooks ‘have to be understood … as a fundamentally political text, if politics is understood in the broadest terms as the understanding of a historical epoch and an analysis of the forces acting to preserve and to change the nature of a political and social order’ (30-1). The discussion in this chapter shows, among other things, how Gramsci’s work defined and redefined politics (again, in connection with his concept of philosophy of praxis) through his interpretation and reinterpretation of such terms as hegemony, civil society, the state, passive revolution, and Americanism and Fordism. Additionally, Schwarzmantel comments in this chapter on the limitations of the English-language selection of PN (in comparison with the full original Italian version).

The following four chapters concentrate on the issues crucial to PN and Gramsci’s thought in general: intellectuals and education (Chapter 3), history and modernity (Chapter 4), politics, state and civil society (Chapter 5), and philosophy and Marxism (Chapter 6).

The question of intellectuals was one with which Gramsci was deeply engaged; however ‘his concern with intellectuals and with education was a broader one, going beyond the specifically Italian role of intellectuals’, it was a contribution to ‘a debate central to socialist and Marxist movements of his time … but Gramsci’s theorization of intellectuals and his analysis of their role are both much wider and more penetrating than anything on the topic carried out previously by socialist theorists’ (70-1). Gramsci defines intellectuals as the agents of legitimation of the existing order, as the functionaries of the superstructure (at two levels: civil society and state): as the dominant group’s deputies. Important parts of this chapter are devoted to Gramsci’s analyses of Benedetto Croce’s thought (further discussed in chapter six), on organic intellectuals and the political party, and on education. Schwarzmantel stresses that Gramsci is concerned with education understood as ‘a democratic force, and as a means of breaking down rather than reinforcing class divisions’ (90-1), hence his critique of vocational schools, and advocacy of a more general type of formative school.

Chapter four focuses on ‘History and modernity’. Many of Gramsci’s most significant concepts, such as hegemony and passive revolution, are developed through careful analyses of historical events, especially the Italian Risorgimento: the complex process of Italian unification and independence from foreign rule, which ended in 1861 with the declaration of Victor Emmanuel as King of Italy. Gramsci’s historical analysis ‘pointed out lessons for the politics of his own time. He saw the process of the Risorgimento as a passive revolution … [which] had left Italy with a defective legacy. It had been an incomplete revolution which it was the task of the working class movement to bring to fruition and in that way complete the process of making Italy a truly modern nation’ (98). Sections of PN show Gramsci as a political visionary (especially in his notes on Americanism and Fordism), although some of his visions and solutions never materialized; on the other hand, it is also possible to see in Gramsci a precursor theorist of modernity, as contemporary ‘analyses of the present state of the global economy do in a sense follow in Gramsci’s footsteps by exploring the political and economic and social implications of the transformed structure of the economy’ (148).

In Chapter five, Schwarzmantel considers ‘Politics, state and civil society’, and discusses in considerable detail the sections dealing with topics crucial to Gramsci’s thought: the nature of politics, the theory of the state and its relation to civil society, revolutionary politics, and the strategy dubbed ‘war of position’. Schwarzmantel stresses that these sections ‘were written in an attempt to analyze the victory of fascism in Italy and the reasons for the defeat of the revolutionary surge in Italy and beyond’ (150-1). The whole chapter demonstrates the practical dimension and commitment of Gramsci’s historical, political, and ideological considerations.

Important sections of the PN are devoted to interpreting Machiavelli, and to constructing the concept of the political party as `the modern Prince’. Other issues discussed in this chapter include leadership and the masses, and concepts of the state. In his prison writings, Gramsci ‘is formulating a new language of politics, even if he is using the same words (party, state, civil society) that have been used by earlier theorists of the political’ (212).

Chapter six deals with Gramsci’s ideas on ‘Philosophy and Marxism’, concentrating especially on the notion of philosophy of praxis, since, as observed by Schwarzmantel, ‘the philosophy of praxis conveys and summarizes Gramsci’s distinctive interpretation of Marxism’ (214). Philosophy is not seen by Gramsci as a specialized activity carried on by professional philosophers, but rather as ‘a process of imparting intellectual order, reinforcement and coherence to the mass of beliefs held in a particular society’ (220); furthermore, it ‘educates and transforms common sense and is the means through which a new culture and Weltanschauung (view of the world) is transmitted to the mass of the people, and this is an essential part of the revolutionary transformation of society’ (219). For Gramsci, this philosophy of praxis can achieve the task of linking intellectuals with the non-professionals, in ways neither religion nor liberal idealism could manage. An important final section of this chapter is devoted to Gramsci’s critique of (and occasional dialogue with) Benedetto Croce. Gramsci recognized the importance of Croce, both for his concept of hegemony, and for highlighting the significance of ideas and culture in a particular society; however, his ‘engagement with Croce’s ideas should be understood not just as an intellectual exercise but as a profoundly political task’ (246). He also argued that ‘Marxist historiography could apply the insights of Croce’s historicism, but purge that philosophy of its speculative and transcendent aspects’ (255).

The last chapter is concerned with ‘The afterlife and influence of Gramsci’s Prison Notes’. Schwarzmantel discusses Gramsci’s influences and presence in post-war Italy, and in the debates outside Italy. He focuses on neo-Gramscianism, understood as the use of categories and concepts derived from the PN in particular fields of academic enquiry, such as international relations, international political economy, and cultural studies (266-7), and stresses that the interpretation of Gramsci as the theorist of the superstructure ‘whose key concept was civil society certainly opened up a new perspective on Gramsci, and fitted in with … the rediscovery of civil society, seen both as the arena for struggle against one-party rule in communist systems and as the sphere of diversity and difference characteristic of liberal-democratic society’ (274). Recent political developments in Europe (though not limited to Europe) show that the tools worked out by Gramsci can still be precisely applied for the purpose of ideological and political analyses. Schwarzmantel very aptly stresses (quoting the Italian scholar Guido Liguori) that the PN are the work of a classic author, ‘of someone whose interpretation of his own time remains relevant at all times’ (285). This chapter also includes a short section on the use of ideas derived from the PN to analyze British politics and the phenomenon of Thatcherism (especially in the work of Stuart Hall), and a conclusion on the status of PN today, where Schwarzmantel identifies a new period of Gramsci studies: a period that ‘opens up for the first time a more adequate understanding of those complex reflections on history, philosophy, politics, language and culture, with their single theme underlying the many paragraphs and notes: how could subordinate groups end their subaltern position? How can a process of moral and intellectual reform be initiated and carried to a successful conclusion?’ (292).

The discussion of individual topics is accompanied throughout the book with detailed referencing and cross-referencing (often comparing the English and Italian versions of PN), and every chapter concludes with detailed suggestions for further reading. The final bibliography is divided into studies directly concerned with Gramsci in English, studies in Italian, and other works referred to in the book (furthermore, a list of Gramsci’s own works precedes the chapters).

This Guidebook will definitely become a most useful resource for Gramscian studies. John Schwarzmantel has achieved his aims, as formulated in his book’s Preface, as the Guidebook ‘introduces readers to Gramsci’s highly original and exciting reflections on politics, history, philosophy and culture, which can help us make sense of our present epoch, different though it is in crucial aspects from the era in which Gramsci wrote his notes in the cell of a fascist prison’ (xii). At the same time the oeuvre of Antonio Gramsci remains open to further interpretations and reinterpretations. It would be fascinating to see profound comparisons with the achievements of philosophers as diverse as, for example, José Ortega y Gasset (and his analyses of leadership and the masses in The Revolt of the Masses), on the one hand, and Hannah Arendt (with her concept of vita activa developed in The Human Condition), on the other.