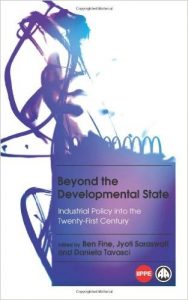 Aaron Schneider is Leo Block Chair of International Studies at the University of Denver. He has …

The global reaction against the 1990s Washington Consensus and rapid growth in a number of emerging economies in the 2000s provoked a renewed interest in alternatives to neoliberalism in development. This collected volume engages the political and structural roots to the developmental state paradigm (DSP), revising original formulations, extending the framework to new cases, and generating new theoretical and policy implications. The book has particular relevance as the global recession since 2008 has dragged on and developing and developed countries search for new state-market arrangements to jumpstart structural change.

The original DSP used inductive study of cases perceived as successful, especially the East Asian tigers, to posit a model of state-directed development emphasizing the autonomy of the state to pursue policies correcting for market imperfections typical of developing countries. Many of the chapters build on the dichotomy within the DSP of economic and political approaches. Economic approaches tended to focus on the policies chosen to correct for market failures, mostly trade protection and promotion, stimulating investment, and directing finance. Political approaches tended to focus on the bureaucratic insulation from but close communication with powerful interests, “embedded autonomy.” The approaches combined to build a powerful statement on the requirements of late industrialization, “what policies are to be adopted and what allows them to be adopted” (4). The DSP provoked counter-claims from those wedded to market-oriented policies, critiques from those disturbed by the failure to account for authoritarianism and limited attention to welfare, and lost some of its luster as a result of the 1997/8 Asian financial crisis.

The current volume embarks on an agenda laid out in the Introduction to get beyond the state-market dichotomy of the original DSP, go beyond the limited attention to a specific phase of early industrialization as a core definition of developmental states, incorporate structural factors such as agriculture and natural resources that appear necessary once we move beyond East Asian cases, and most importantly, “make a major contribution to the progressive transformation within global capitalism, if only as a stepping stone that must be surpassed both analytically and strategically” (27). It is with this progressive agenda that this review will close.

Edited volumes frequently face challenges in creating dialogue among various authors, yet this book accomplishes a great deal of complementarity among contributors. Chapter two seeks to explain not just the rise of a new industrial enterprise, steel in Japan and Korea, but also its decline, emphasizing the state role in imposing and shaping neoliberal privatization and liberalization policies. One implication is that successful developmentalism in an early stage of industrialization may create the capitalist and working class interests that force a change in patterns of embedded autonomy as well as require a new mix of appropriate policies for a mature sector such as steel – “liberalization should be understood as another type of state intervention” (45). Chapter five also addresses the limits to developmentalism, this time in a still-maturing sector with room for innovation, such as microelectronics. South Korean firms have caught up with leading producers but remain constrained to operate within the limits of a technology frontier set by first movers in Japan and the US as a result of industry structures and access to key activities in R&D. These chapters extend the DSP across time and stages of industrialization to explain the rise and maturation of an industry, while chapter three extends the DSP to explain not only success but also failure, by exploring the South Korean car industry experience of multiple failures before finally achieving some success.

Other extensions of the DSP appear in chapters six through ten occur as the framework is extended beyond East Asia, looking at India, Nigeria, Argentina, and South Africa. In chapter seven, analysis of the Indian IT sector suggests that public private partnerships added up to a service sector developmental state, including technology park infrastructure, regulatory frameworks, trade and investment protection, and privileged finance and market. The Nigerian case appears as a failed developmental state precisely because the role of primary sectors (agriculture and natural resources) in industrialization have not been successfully incorporated into the DSP nor applied in practice. The Argentine case in chapter nine combines multiple extensions of the DSP, looking at success and failure, rise-maturity-decline over time, and attention to a new sector, finance. The chapter argues for the existence of a developmental state in finance, rather than the traditional view of finance as an input to industry, and describes both the successful integration of finance and industry at early phases of the Argentine DSP, along with the eventual separation of the two sectors and ultimately the collapse of economic activity as a result of exaggerated financial crises.

Two chapters stand out in terms of their efforts to engage the DSP in a critical manner. More than extend the DSP, chapter four employs a critique focused on the role of working classes. The original DSP, and neoliberal theories also, portray working class demands as obstacles to be overcome, often through authoritarianism. Worker organization is a hindrance to the ability of states to implement appropriate policies. Yet, in the case of post war Japan, “to pacify these struggles, Japanese capital and the state needed … more egalitarian development, with better wealth redistribution, … and a particular set of relations between capital, state, and labor began to take shape” (100). Instead of merely demanding wasteful and populist policies, working classes in Japan, Taiwan and Korea (with ethnic and nationalist elements added in the latter two) often provoked innovations in technology and in state-management relations, precisely because of the degree of labor mobilization. Rather than a pluralist approach to classes as interest groups making demands, the chapter urges a relational approach in which classes retain their class connection to modes of production and mobilization forces shifts in the relations between capital, labor, and the state. Chapter six argues that globalization has “effectively narrowed” the policy space, making impossible the kinds of trade and financial interventions adopted by developmental states. Instead of attempting to address the late-comer challenges of catching up, the chapter argues for narrowing the DSP to efforts to remove certain areas of life (housing, health, education, etc.) from market processes, perhaps taking the DSP in the direction of the “adjustment with a human face” critique of the Washington Consensus of the 1990s.

When it comes to laying out an agenda for a more progressive approach to development, the class focus and the anti-market intuitions of these more critical chapters is focused on “systems of accumulation” in a closing chapter on the “mining-energy complex” in South Africa. This final chapter draws attention to the political uses to which the DSP is put, with post-Apartheid governments in South Africa attempting to claim the developmental state mantle even as they adopt neoliberal strategies leading to deindustrialization, financialization, and increased external dependence.

The politics of the DSP are exactly what have to be taken up if a renewed DSP is to accomplish what the original DSP did not. It is worth remembering that the original DSP emerged within the tradition of development thought that emphasized extraction and exploitation within the world system. From this heritage, the DSP focused most of its attention on the domestic characteristics that allowed for state autonomy and interventionist industrial policies to correct for market failures. The current volume expands the DSP arguments by adding explicit attention to additional structural and political characteristics that go beyond state autonomy and market failure, but the potential to articulate alternatives to a world system of extraction and exploitation has been left on the table. Such an alternative would draw a not-quite-straight line through anti-colonial struggle of the 1950s, the non-aligned movement of the 1960s, the New International Economic Order of the 1970s, and the developmental state paradigm as applied to the East Asian NICs. When placed in this sequence, the debt crisis of the 1980s and the neoliberal Washington Consensus of the 1990s represent an interruption and reversal championed by Northern conservatives such as Margaret Thatcher and Ronald Reagan and imposed with the authority and power of institutions such as the World Bank and IMF. In this sequence, the subsequent emergence of the BRICS and efforts to resuscitate the DSP address more than national efforts to rebalance state and market in pursuit of industrialization; they are a renewed Third Worldist project.

By going beyond the territorial boundaries of the developmental state, class and political characteristics of industrial policy take on additional dynamics. To describe a Third Worldist project requires theorizing and categorizing the multiple dimensions of cleavage in the world system, and the ways individual nations and class actors position themselves with respect to these cleavages. While the DSP focuses completely and effectively on the North-South cleavage generated by differential rates of accumulation in industrial and non-industrial societies, an expanded perspective would be better suited to the contemporary globalized and integrated world economy. Beyond the Developmental State rightly considers the role of state intervention in helping national industries adapt to global integration, and it could further investigate how these efforts reshape patterns of extraction and power, shifting focus to the class actors in developing countries interested in accumulation at a global scale, the kinds of state power they build to project their interests beyond their borders, and their occasional success at achieving power at the international level.

Such a perspective would also bring into greater relief the globalized dimensions of class struggle that emerge with the maturation of industrial policy in developing countries. Even as national bourgeoisies adapt themselves and their states to globally-integrated industrial processes, they remain dependent on working classes for the production of value. The difference wrought by globalization is the ability of national capital to find exploitable labor and resources across multiple territories, disconnecting their state-building project from the requirement of reproducing the national working class. By going beyond national boundaries, the DSP could address the globalized character of capital, what this means for developmental states, and importantly, how working classes can organize for a progressive global system of accumulation. As Western imperial expansion and intervention in multiple regions sparks varied responses, there is ample room to expand on the role of developmental states in rebuffing renewed imperial designs and articulating more humane norms for international order. In fact, the developmental state paradigm offers a promising core to a developmentalism-friendly world order.