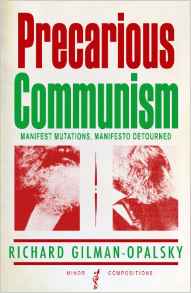 Heidi Johnson is Social Sciences Librarian at the University of Nevada, Las Vegas. She completed an …

A method first elucidated and practiced by Guy Debord, détournement refers to a sort of hijacking through which the author or creator turns primary source materials on their head, critiquing them and going beyond the original content while imitating their form and style (6). Thus, much like the Communist Manifesto that it detournes, Precarious Communism: Manifest Mutations, Manifesto Detourned is a critique of capitalism and a call for the truth about capitalism to be unveiled. It is also a call for revolution, for capitalism works against the diverse interests of most people on earth by placing profits above people, and the outcome is an unacceptable present and an unlivable future (5). However, not only does author Richard Gilman-Opalsky address the material and technological conditions in today’s globalized world just as Marx considered the material conditions of the proletariat and the bourgeoisie, he also addresses the psycho-social and affective dimensions of human experience, as humans experience desire and have the need for dignity and association. Ultimately, Gilman-Opalsky takes the materialism and class analysis of Marx and complicates them, analyzing and observing the realities of present-day society in order to come to different conclusions (8).

Gilman-Opalsky clearly distinguishes between autonomist understandings of communism and capitalism and the more predominant mythological, or what he calls “spectacular,” forms of communism and capitalism (68), and this builds off of his previous work in Spectacular Capitalism (Minor Compositions, 2011). The spectacular forms of capitalism and communism refer to the faulty understandings of them that largely determine people’s beliefs and actions, or the lack thereof, vis-à-vis the existing state of affairs, as well as their ideas about what is possible in the future. For instance, people believe that capitalism serves their interests and that they can obtain wealth and property through hard work (69). People believe that communism means big government, taking the wealth away from the wealthy, or celebrating Mao or Stalin (68-9). These are myths that serve the interests of capitalism at the expense of the vast majority of people, who, due to the economic and social instability that capitalism causes, are precarious (without yet being precarious communists) (72). Gilman-Opalsky’s analysis of the predominant beliefs about communism and capitalism is sharp and convincing. In insisting on the necessity for these distinctions, Gilman-Opalsky places the realities of the existing state of affairs, as well as the need for capitalism to be unveiled, into starker relief, and this marks an important contribution to both philosophy and Marxism.

Gilman-Opalsky’s treatment of the psycho-social and affective dimensions of human experience is lucid and insightful. In part III, Excurses, for example, he elaborates upon his answers to the question of why this matters – why revolt is necessary. All people want dignity, which is a property involving both self-confidence and external affirmation (99, 100). Gilman-Opalsky’s greatest insight here is that the presence or absence of this property of dignity is something that can only be judged by the person who possesses or lacks it. Another person, a corporation, a dominant group cannot claim they are treating others in a dignified way unless that individual feels dignified by that treatment (100). This claim alone shows that Gilman-Opalsky’s stated goal of unveiling the truth about capitalism in order for people to revolt is grounded and substantiated by this theoretical analysis of the very qualities that define human experience. His analysis of the desire for autonomy is similarly insightful. For example, he claims that true freedom does not exist if people do not have the desire to do what they are doing, and self-governance marks the total fulfillment of the goal of autonomy (103). This, again, shows a sensitivity to human experience that goes beyond that of Marx in the Manifesto, and shows that Gilman-Opalsky’s theoretical underpinnings have not just a rational component but also an affective one.

Given the centrality of desire, Gilman-Opalsky addresses the effects of capitalism on desire, as well as the new technological developments on the psycho-social dimensions of human experience. Capitalism, says Gilman-Opalsky, has not only made desire a casualty but also has brought about a new mind/body split, in which labor is increasingly done by the mind, and the body has increasingly been made unnecessary for labor. Physical labor of course still occurs; it is often just hidden from view (24). Coincident with this development has been the advent of “cellular time” whereby our mental energies are continuously activated through mobile devices (25). This “cellular time” phenomenon that Gilman-Opalsky describes captures the development from brains controlling bodies to a system of disembodied brain activity (23). Perhaps other scholars in different disciplines have identified this disembodied state of being in the world brought about by technology, as well, but Gilman-Opalsky points out its unique political significance: that it is a boon for capitalism (more labor without more pay), and – with cognitive labor now happening around the clock – that it obliterates the 8 hour work day, which had originally been a triumph for communists, anarchists, and the labor movement (22). Now, people succumb to capitalism’s demands every waking moment, and their thoughts are always “colonized” by their work (25).

One possible point of confusion for the reader is whether Gilman-Opalsky is prescribing consciousness-raising or action. Indeed, the ambiguity present in his work, in terms of prescribed actions, is intentional and explicit, although clarification, even in the form of generalities, on this particular point might have been useful. In several places, Gilman-Opalsky emphasizes the need to unveil the truth about capitalism and the need to attain a revolutionary self-understanding. He states that precarious communism is defined first and foremost by the “destruction of capitalist mythologies,” and not the total destruction of capitalism or precarity themselves (68). Upon closer examination, however, that revolutionary self-understanding is always accompanied by action, or is even brought about through action. For example, the sort of revelation he speaks about necessarily leads precarious people to become precarious communists, and “[p]recarious communism is precarious inasmuch as it accepts that concrete proposals for new ways of being-in-the-world will be differentially developed as nodal points within the contexts of actually existing revolt” (5). Thus, precarious communists engage in actual revolt and develop new ways of being in the world in and through revolt; precarious communism does not refer simply to belief or the awakening of consciousness, although those are important aspects of it. Gilman-Opalsky even argues that philosophy is done best through action, for example, since it does a better job of fulfilling the goal of philosophy, which he identifies as throwing the world as we know it into question (67). In essence, we think best through doing; we think best through revolting. Thought happens through action, so attaining a revolutionary self-understanding – thinking about and coming to know the truth about capitalism – implies action as well. All of Gilman-Opalsky’s examples point to this. Even his claim that riot can be a form of “psychic revolt” (in Kristeva’s sense) supports this (129). In sum, all that is required is a revolutionary self-understanding, but that’s asking a lot and involves far more than just consciousness-raising.

An ostensible weakness of the work – that Gilman-Opalsky doesn’t commit to anything – is actually due to an explicit and conscious decision on the part of the author. What revolt will look like or should look like, what could result from it, Gilman-Opalsky refuses to say. Gilman-Opalsky also refuses to say clearly whether he thinks a new form of society will come to be eventually – as no crisis is guaranteed – and what that would look like, although he does suggest that capitalism may have run out of new frontiers, contra those who ascribe to the myth that capitalism’s frontiers are endless (33, 44). In terms of suggestions or solutions, Gilman-Opalsky, like Marx, does offer a short list of 10 very general autonomist “aspirations,” e.g. the goals of the de-privatization of the means of communication, and free education for all children and adults (94-5). But this ambiguity of the work is precisely the point of precarious communism as autonomists understand and practice it; communist desire cannot be spelled out, for any sort of unitary agenda would leave out actual desires (5). While this statement leave some room for questions, it can be inferred that desires themselves cannot be prescribed or predicted if people are to be free to act upon their desires. To dictate actions would be to misunderstand desire and its role in revolt.

Thus, autonomists reject party politics and seek new, “autonomous” avenues for bringing about a new social order rather than any sort of prescribed set of instructions for doing so (41). Precarious communism is about working towards a future that is uncertain, and being uncertain oneself about what that future will look like. The only sure thing about precarious communism is that it rests on the foundational belief that capitalism is organized against the diverse interests of most people on earth. With that foundation established, people can exercise a great degree of freedom and creativity through their revolutionary actions. This leaves room for desire, and for autonomy. It also speaks to the importance of association, which also cannot be prescribed or dictated but is essential for human solidarity (108). When understood as precarity, or uncertainty, the ambiguity of Precarious Communism is precisely what lends strength Gilman-Opalsky’s arguments. While Gilman-Opalsky has no plan of action for the reader, throughout the work, he does identify glimmers of communist desire, and these signs of communist desire point towards promising possibilities, albeit precarious ones.