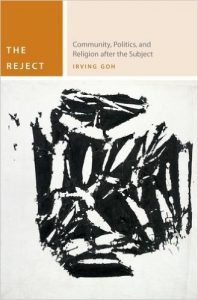 Irving Goh
The Reject: Community, Politics, and Religion after the Subject

Iraklis Ioannidis, PhD, is a Teacher of Philosophy, Religious Studies and Classics at Dartford …

Irving Goh’s Reject: Community, Politics, and Religion after the Subject is a critical synthesis with a ‘philosophical contour’ (xiii). If the post-structuralist movement revealed and critiqued the fact that our lives have been organized based on a subjective point of view of ‘the average adult-white-heterosexual-European-male-speaking a standard language’ (2) while rejecting, marginalizing, oppressing, and sometimes eradicating others who do not conform, Goh’s Reject comes as a bold response to what contemporary post-structuralist thought has to offer after that critique.

With his starting point a collection of essays edited by Nancy Who comes after the subject? (1991), Goh draws from a plethora of contemporary French philosophers and identifies in their work a conceptual thread which he articulates as the reject: ‘a critical figure of thought for the contemporary world’ (xii). The reject, Goh maintains, has been a common presentiment never before coherently expressed yet subtending (13) post-structuralist thought. Like a Derridian text the book works in multiple levels: it theorizes the reject through philosophical ‘textual elucidation’ (97); it explores all possible meanings, significations, and manifestations of the reject; and it makes the bold move to do something that the vast majority of post-structuralist thinkers do not, that is, to articulate ‘at least potential empirical applications’ like ‘a trajectory of resistance’ (202) against oppressive ideologies, a way against ‘our violent post-secular that does not know how to accept differences’ (123), and to conceptualize the possibility of a community which is not unified by commonality but by difference – what Derrida has theorized as unconditional openness and hospitality.

In the Introduction we learn about the reject. It is ‘constituted by three turns’ (7). Firstly, passively, ‘a passive figure targeted to be denied, denigrated, negated, disregarded, disposed of, abandoned, banished, or even exiled’ (ibid.). Secondly, actively, either by initiating rejection or by resisting rejection. By assuming a particular ‘subjective’ view, we have all experienced the first two turns. Goh’s ethical move is a suggestion to incorporate a third turn, that of the auto-reject. To avoid being stagnated or stabilized, either as a passive reject or an active reject, ‘the auto-reject puts in place an auto-rejection in order not to hypostasize on a particular thought or disposition’ (ibid.). Goh reiterates constantly that the auto-reject is not self-annihilation but creative regeneration. Precisely because the auto-reject is creative regeneration it is difficult, if not impossible, to pin it down to what it is, it auto-rejects.

In Chapter Two the reject is revealed through “friendship” (Derrida, Deleuze and Guattari, Stiegler), “love” (the phenomenology of Clement and Irigaray), and “community” (Deleuze and Guattari). It is, undoubtedly, a sophisticated synthesis that reveals not only how the figure of the reject is underlying these thinkers’ thought, but practically how ‘the reject can coexist with others’, or more precisely, ‘how it traces its trajectories without negating the existence and the difference of others’ (25). The strongest point of the chapter is its analysis of the appropriation of the concept of friendship by ‘a capitalist machine of continuous control and instant communication [which] continues to motivate and drive this hegemonic dimension of digital network sociability’ (35), and how the reject can resist this appropriation. The Chapter also features an analysis of Amery’s reply to Nietzsche on the notion of ressentiment to further enforce the idea of the auto-reject.

In Chapter Three, following a critique of Badiou’s theory of the objectless subject, Goh advances a synthesis of the writings of Derrida and Cixous on religion. Each member of a religion can be considered as an active reject of the other’s views. With Derrida’s ancient Greek concept of χώρα (khora), which is a concept that rejects the notion of a concept, Goh theorizes the auto-reject as an opening of a place with no placings, a spacing where the rejects as auto-rejects can be found without being ‘dominated by any theological, ontological, or anthropological instant’ (131) because they think their religion anew and differently in non-anthropocentric and non-anthropologic ways.

Chapter Four dives into politics and sets off with Balibar’s and Rancière’s citizen/political subject. The highlights of this chapter are, (a) an attempt to critically evaluate the Occupy movement by reading it following Agamben through the lens of Melville’s character Bartleby as a legitimate reactive movement gone bad, and (b) an articulation of the types of resistance that are required whilst being in a sovereign state that seeks to advance a micropolitics of surveillance and technologies of constant monitoring and control. The auto-reject becomes an exigent figure that could reject the traditional radical resistances which all fall prey to the state of control. The auto-reject here emerges from the works of Deleuze and Guattari and the notion of “becoming animal” read as foretelling the embodiment of the auto-reject, a move to escape surveillance, conceptualization, and control. ‘In the face of a politics of identifiability, becoming-an-animal surreptitiously contests the demand for a totalizing coming to presence and presents at best a haziness before all the gazes of the State apparatus’ (205).

Chapter Six and the Conclusion further elaborate the auto-reject particularly through the works of Deleuze and Nancy and “recent developments on microbiology” (228). Prominent here is notion of clinamen, ‘subtractive thinking since clinamen names the process by which atoms detach from a living body or matter without the latter controlling that detachment’ (233); and Deleuze’s multiciplicities and incompossibles. Contrary to the reviewed discourses of the so-called posthuman, which still persist in keeping hold of the subject, Goh attempts to show that, instead of being deprived of a possibility of existence just because we are incompatible, as auto-rejects we can become existing as incompossibles ‘where each is free to pursue [our] own divergent trajectory’ (250).

The theorization of the auto-reject has certain philosophical difficulties. Goh seems to conflate the ontic-ontological, epistemological, and axiological aspects of “the subject”. While he does mention Nancy’s critique of the figure of the reject as ‘bad wordplay’ (18-20), it seems that Goh never really appreciates what that entails. We can ask with Ricoeur “who rejects” or better “What is this entity that does the rejection or engages in an auto-rejection sequence?” This ontic-ontological question is not a question ‘of which figure of thought can be adequate to do the task’ (29). In Parmenidian terms, there is a principle that initiates. What is this principle? Many of the cited post-structuralist phenomenologists that Goh cites use ‘subjectivity’ as the transcendental condition of the empirical subject. In what sense can we drop this ‘subject’? In Heideggerian terms, dropping the sub/ὑπο, and ob/ἀντι from subject-object relation (ὑποκείμενον-ἀντικείμενον) one is left with κείμενον-Dasein – which is nothing else than the freezing moment of a constantly moving being, its text-κείμενον (literally, standing, being-there). With Heidegger we have a standing being as a text whose expression it is and hence can be interpreted and (be) accounted; a move from metaphysics to hermeneutics. Now, Goh, proposes the (auto-) reject (ἀπό-κειται) by hypothesizing its possibility without a reflexive moment. Even as a creative regeneration, rejection can be read dialectically either as affirming what it rejects – since to reject what is going to be rejected is to affirm its rejection – or, to affirm what is not going to be rejected. There is a reflexive moment as evaluation, intentionality, emission and so on. In what sense can this be “dropped-rejected”?

Post-structuralism does not necessarily (ontically) reject the principle which constitutes human reality. Deconstruction does not mean dissolution or liquidation even with Derrida. What it does contest and does not accept, however, is the legitimacy of a truth as a defining moment, a particular point of view as normative. Epistemologically, why does Goh critique religion on the premise that it has been conditioned on animals while rejecting them and does not do that for science as well (which if anything uses animal analogues for experimentation and kills them?). How would the reject be manifested in such epistemological terms? Why is scientific thinking endorsed and not auto-rejected as with Feyerabend?

Finally, at the axiological level questions arise. Goh critiques Haraway’s theorizing about ‘a subject constituted in and by multiplicity, that is to say, a subject that works across differences and is also internally differentiated, but still grounded and accountable’ (220). The issue here is not of responsibility (an axiological issue) which could presuppose (ontologically) some form of good/bad binary and which would entangle us in the epistemological question of who defines the good/bad. Here the question is how can being accountable be fitted in a constant a(nti)-reflexive auto-rejection. It simply cannot. Auto-rejection actively rejects hermeneutics.

A more worrying issue, however, is the concept of ‘negotiated resistance’. Goh’s analysis about the ways the state as a controlling machine oppresses is remarkable. And one could not agree more with Goh and Deleuze that today ‘resistance needs a subtler strategy’ (202). But for Goh this resistance takes the form of a ‘non-battle; rather it is closer to guerilla tactics than the war of extermination … one does not seize the adversary to render it absent, one delineates its presence to neutralize it, to render it incompossible, to make it recognize divergence…. It is a world not of common values’ (243). But is this still not working within a bourgeois ideology? The master does not want to eradicate the slave as Nietzsche has shown. To be a master one wants to be a master of (the reflexive moment missed by Goh). The Occupy movement does not want to eradicate the being of the 1% (the rich), but their being rich(er at the expense of the 99%). If the world of incompossibles in economic terms means a constant never ending negotiated resistance of the “have nots” against the “haves”, then surely a bourgeois ideology is at work which, deconstructed, reveals the workings of platonic positivism. With Henry: ‘It is not because there are individuals that labor that there is a class of laborers; it is because there is a class of laborers that there are individuals who labor’ (92).

Overall, Goh’s pro-ject should not be re-jected at least for the amazing work to pull together profound critical philosophical work. Even in its philosophical ambiguity it does introduce the reader to key issues that reverberate in contemporary scientifico-technologico-capitalist society.