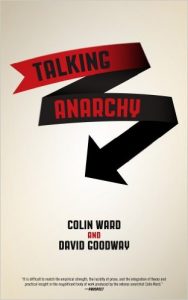 Elizabeth Vasileva is a PhD candidate at University of Loughborough, working on Deleuze and …

The zine, Say You Want an Insurrection (2009), observes that “the high turnover rate in most anarchist communities often dooms them to relearn the same lessons over and over,” a problem encountered by new generations of all (or no) political convictions. Talking Anarchy is an excellent remedy for this problem, as it contains the precious memories and connections made by Colin Ward over his lifetime as a British anarchist, as well as a gentle introduction to his theories of anarchism.

Talking Anarchy is mostly an autobiography of Ward’s life and as such is better seen as a supplement to his theoretical works than as a resource for anarchist theory. The book takes the form of a long interview between Ward, often considered the most important British anarchist, and David Goodway, an historian and also an anarchist. It reads smoothly and quickly like a live conversation even though, as Goodway explains in the Preface, the dialogue was conducted via letters and the two didn’t meet in person. The main focuses of the book, perhaps sparked by Goodway’s interest in history, are Ward’s engagement with Freedom Press, the trajectory that led him to become an anarchist, the relationships and disagreements he experienced between anarchists, and, to a lesser extent, the theories Ward advocated in his books Anarchy in Action, Talking Green, Anarchism: A Very Short Introduction, and others. Talking Anarchy is packed with British anarchist history from the 1940s to the 2000s, short anecdotes from Ward’s life, his memories of other anarchists he knew or met, propaganda production, connections with other social movements, and reflections on his role in Freedom magazine, the journal Anarchy and other publications such as the New Statesman and BEE. Ward seems to have been a tireless activist – he edited and almost self-wrote Anarchy for decades, worked as an engineer, and participated in various activist groups. He mentions, for instance, the open-air anarchist speakers who drew crowds in Hyde Park every weekend, his friend Philip Sansom performing satirical songs with the help of a cardboard box for percussive accompaniment, the court case where he testified in favour of his friends (34-5). On the other hand, Ward is critical of the internal differences between different anarchist groups, commenting that “to the outside world, anarchism, like Trotskyism, makes itself ridiculous because of its ideological subdivisions” (46) and for this reason refuses to comment on the division between him and Murray Bookchin (111). The role of which he speaks mostly fondly is that of a propagandist – a role he took very seriously, trying to reach out to non-anarchist audiences his whole life. Philosophically, he reflects on leaving school at the age of 15 and the huge influence that had on making his anarchism ‘practical’ and accessible. At the same time, he acknowledges the importance of Kropotkin as his main influence, along with contemporaries such as Alex Comfort, Dwight Macdonald, Paul Goodman, and various architects, criminologists and educators.

Regarding Ward’s theoretical work, there are a few interesting remarks. For example, the fact that he focused on “anarchist solutions” (15) to broad problems, providing anarchist blueprints for organising transport, schools, agriculture and others, something the anarchist movement has been notoriously cautious of doing for fear of imposing anarchist ideals on non-anarchists. Ward believed that anarchism is a way of organising workplaces, education, communities, and a series of practical actions that can be implemented without waiting for the revolution. Interestingly, instead of Anarchism: a Very Short Introduction, he wanted to call his book Anarchy as a Theory of Organisation. The main cornerstone of his theory seems to be the belief that as long as people have access to resources and are left in charge of their own destiny, they will act like anarchists – organising their lives much better than any hierarchically structured society or bureaucracy could ever do. Moreover, one does not need to identify or even be familiar with anarchist principles to act in cooperation and mutual aid, thus Ward’s favourite image of anarchism always alive as “seeds beneath the snow”. Finally, Ward was remarkable among anarchist academics in the breadth of his topics of research – for example, one of his most interesting contributions was his work on children and the urban environment where he explores questions of informal education and the role of communities in bringing up children. His main argument was that schools perpetrate social inequality and injustice, and children are progressively less and less involved in their neighbourhoods and more often seen as a nuisance or a problem. This research and perspective served as an inspiration to various social scientists in later years. Ward was of course also interested in more ‘typically’ anarchist topics such as squatting, for example, and in Cotters and Squatters (2002) he explores the history of rural land settlements and the evolution of the squatter’s movement.

However, in the few places where theory comes up in Talking Anarchy it seems to remain at the level of personal opinions – every theoretical question, for example, is followed by a personal one which hinders there being any follow-up. Moreover, in a few places it feels like questions are deliberately not asked. I am here particularly referring to Ward’s memories of the feminist movement and the attempts of various anarchists to change what they saw as sexually repressed British society, promoting rights for contraception and abortion, and equality for women. He goes on to recall the amount of unpaid work women did for the anarchist movement, such as organising the production and distribution of anarchist materials, organising meetings and raising funds, which ought also to raise the question of the lack of, or underrepresentation of, female contributors to Freedom. Moreover, as some might recall, Freedom was often criticised for being a male-dominated publication whose authors are “resiliently sexist” (Zero Collective 7). Even though the split between anarcho-feminists and anarchists might be an uncomfortable issue In which Ward doesn’t want to situate himself, it would have been interesting to hear his reflections on it, and perhaps also on his own efforts as a male anarchist to show solidarity and practical support to women and non-binary people. Another similar instance is when David Goodway starts asking about the ‘practical’ living politics of Ward’s life at the moment – with the question “Are you a vegetarian?” (89). He replies non-committedly, and immediately afterwards condemns activists who have issued death threats to pharmacological researchers (90). This sentiment is unlikely to go down well with many of today’s activists and anarchists and appears to skirt around what is now a very prominent issue.

As much as it is interesting to hear that the British anarchist movement did pretty much the same as it does today, including perpetrating sexism, it is disheartening to read yet another story about a white, male, privileged anarchist who is barely reflective of these dynamics. It builds a picture of a generally easy-going life with an abundance of occupations, free time, and ways to socialise and have fun, implying a middle-class lifestyle that does not seem fitting for the working-class background Colin had. Despite the obvious merits of Talking Anarchy to someone who wants to know about British anarchist history, I can’t help but think that it does little to promote the anarchist ideas Ward has spent his life writing about. The book doesn’t discuss problems or theory, but merely makes statements about them and, considering Ward’s dislike of “anarchists’ obsession with the history, whether glorious or infamous, of their tradition” (19), it seems to be strange that this is exactly what Talking Anarchy is an example of.