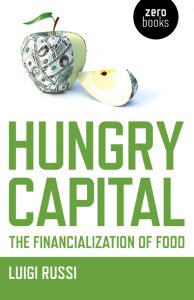 Nicola Livingstone is a lecturer in real estate at the Bartlett School of Planning, University …

In ‘Hungry Capital’, Luigi Russi considers the relationship between food production, consumption and finance in a short but interesting, revelatory but not revolutionary, and original but somewhat disconnected book. The metaphor of Hobbes’s leviathan is adopted to set the scene, situating capitalism as the monster being precariously held together by the fragile and contradictory relations it creates. This topical book seeks specifically to examine how ‘an unstable financial system is projected onto the world of food, while the increased fragility of the food economy feeds in turn the very chaotic features of the financial system’ (4-5). Russi organises chapters into key themes, beginning with a more general overview of the complexities of the financial system (chapter 2), followed by consideration of the evolution of the financialisation of food (chapters 3-5) and finally providing two case studies, looking at the influence of land grabs and the corporatisation of coffee production and distribution (chapters 6 and 7). In his Conclusion, Russi offers the idea of a paradigm shift as a possible solution to the challenges of reinventing the food economy and suggests that ‘innovative agency deployed from within and without the system may act as a counterpoint to the existing expansionist tendencies of the financialised economy’ (103). However, although Russi has the desire to tell a ‘new story of food as co-production’ (103), the book fails to promote a clear way forward, offering only minimal insight into how innovation and active responses against the capitalist system of food production may take shape in practice.

Chapter two presents an analysis of the ‘black box’ (6) of finance, beginning by reflecting on endogenous influences which effect the ‘patterns of relations’ (8) in the financial system. These relations are consistently rebalancing and shifting in a contradictory way in order to counterbalance possibilities for entropy whilst, concomitantly encouraging ‘unsustainable growth’ (19) and therefore contributing towards entropy. Such are the ‘self-reinforcing dynamics’ (17) of the financial market, which leads to the systemic regulation of society’s actions, in terms of not just what we consume through food, but also where we invest capital. Here Russi builds in the development of derivatives: market traded vehicles whose apparent ‘value’ is derived from an underlying asset, be it real estate, commodities or food. However, there is often disconnection between the pricing of the derivatives and the assets themselves, due to market sentiment and pricing driven by trading, with financial speculation increasing the drive towards profit maximisation. Russi demonstrates how the financial market is riven with ‘glitches’ (30), which results in trickle down effects from trading being acutely felt in the food markets, as they become ‘financialised’.

The financialisation of food and the consequences it brings is discussed more fully in chapter three, through three ‘food regimes’ (33). These regimes chart the progressive absorption of food into the capitalist system, from the first regime (where food production was localised and trading colonialised), through to the second regime post World Wars, where the state influence was paramount in the promotion of the ‘comprehensive industrialisation of agriculture, with a view to maximising food production’ (35) via processing chains and substitutionism (e.g. providing ‘alternative’ synthetic goods, such as margarine in place of butter). The third regime was stimulated by collapse of the Bretton Woods system and the third world debt crisis, leading to the increasing involvement of international bodies in regulating the food systems at work, whilst financial liberalisation and globalisation led to market monopolies of food suppliers squeezing the producers. The latter situation has been marked by increased control of the food industry by transnational corporations (TNCs) as they adopt an almost imperial approach to production, as well as the simultaneous adoption of food into the financial markets through commodity speculation and indices (as detailed in chapter 4). The shift away from the autonomous ‘peasant condition’ of farming (54) into an engineered and profit driven entity, has led to our current position, where exploitative social and catastrophic environmental impacts have become inevitable under the ‘pervasive economisation of the food system’ (61).

Coffee production and land grabs are the two case studies presented in chapters 6 and 7, both of which are criticised as neoliberal and unsustainable, especially in developing economies. The food production system today epitomises how finance and profit are prioritised over society’s wellbeing and ecological soundness. The dynamics of food production demonstrate the indifference of financialisation to the inequalities it exacerbates, through coffee fuelled speculation (75) or the destruction of land for the production of jatropha (87). Each of these case studies provide incisive insight into the precarious financialisation of food and help to demonstrate key points previously made in earlier chapters.

The concept and content of the book is ambitious and interesting, but for me, the organisation and presentation of information, resulted in a disjointed and interrupted reading experience. Russi has covered a lot of research ground here and attempted to unravel and simplify the intricacies of food systems under capitalism, for which he is to be lauded. However, due to the organisation of this book, a wide variety of seemingly distinct yet related topics are analysed in some detail independently of each other, then reflected on in the final conclusion. But, there are few explicit links and connections provided for the reader in between chapters, which make for a frustrating examination of an inherently problematic and worrying phenomenon. There is no debating the contemporary relevance and importance of this book, and Russi succeeds on many levels in revealing the mutually destructive and profitable alliances between transnational food corporations and producers (chapter 5), introducing key ideas on financial speculation (chapter 4) and derivatives (chapter 2), emphasising the drive towards profit maximisation, irrespective of the resulting marginalisation of producers and demonstrating the system’s lack of concern for more-than-economic costs (chapter 6). The destruction of the environment and the consequences for us, as the human race are further exposed (chapter 7). Indeed Russi introduces us to a wide variety of issues from which many further opportunities for discussions emerge. All in all, although this book concludes by suggesting a necessary paradigm shift and considers how smaller acts of resistance can be accumulated and amplified, it doesn’t do enough to answer the question of how the food system itself can be radically altered. Hungry Capital opens up perspectives for additional investigation. It is less of an answer and more of an emerging question over what can be done from the perspective of the left to further understand and effectively respond to the destructive social relations being created by the financialisation of food.