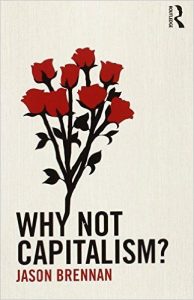 Jason Brennan
Why Not Capitalism?

In Why Not Capitalism? Jason Brennan mounts a moral defense of capitalism using G.A. Cohen’s posthumously published Why Not Socialism? (2009) as a foil. His goal is twofold. First, he argues that Cohen’s defense of socialism rests on two fallacies that mislead readers into finding socialism morally preferable to capitalism. Second, he seeks to demonstrate that capitalism would be morally preferable even under ideal conditions of justice.

To understand and assess Brennan’s arguments, we must carefully examine Cohen’s strategy for defending socialism. Why Not Socialism? presents a preliminary case in favor of socialism. Cohen builds his case by sketching a camping trip with a number of essential features. First, the people share a common goal of everyone having a good time. Second, the campers cooperate following norms of equality and reciprocity – the campers contribute to the trip by voluntarily dividing up tasks in a way that takes into account preferences, needs, and abilities. Third, property is under collective control for the duration of the trip. These features correspond to a socialist conception of justice.

Cohen asks us to contrast this with a camping trip governed by capitalist principles of individual property rights and market exchange. Harry is a skilled fisherman and insists on eating the perch himself and only giving the other campers catfish. Sylvia finds an apple tree and agrees to show it to the other campers in exchange for special privileges. Leslie asks the campers to pay her to teach them her nut-cracking technique. Morgan insists on his unilateral right to eat the fish from a pond his father dug thirty years ago.

Cohen thinks that most of us will prefer the first camping trip because it exemplifies socialist equality of opportunity. Socialist equality of opportunity is based on an egalitarian principle and a principle of community. The egalitarian principle allows only for inequalities that 1) reflect differences in preferences and lifestyle choices and 2) inequalities resulting from regrettable choices and calculated gambles. Cohen also holds that large inequalities that result from regrettable choices and gambles can undermine community. For this reason, socialist equality of community also requires communal reciprocity in which people cooperate and serve each other because they care about each other’s good. In contrast, Cohen sees the capitalist camping trip as based on principles of greed and fear. In capitalism, people cooperate because they seek to gain, not because they are fundamentally concerned with others’ well-being.

Brennan acknowledges that many non-socialist readers are nonetheless attracted to the moral vision of Cohen’s camping trip. They reject socialism, as Cohen characterizes it, because they believe it is unfeasible. Instead, Brennan thinks Cohen’s moral vision derives its plausibility from two fallacies. First, Cohen compares an ideal socialist camping trip with benevolent people sharing a common good to a more realistic capitalist trip with selfish people (57-9). Second, Cohen conflates the socialist economic practice of collective ownership with the moral principles of equality and community, not realizing that these principles are conceptually independent of any specific mode of property ownership (62-3).

To demonstrate these alleged fallacies, Brennan constructs what he considers a parallel example, the Mickey Mouse Clubhouse Village. In the Clubhouse Village, Disney characters carry out their lives pursuing their projects, sometimes together, sometimes separately. Unlike Cohen’s camping trip, there is private property – Mickey is the owner of the clubhouse, Minnie owns a hair-bow factory, Clarabelle cow owns a “Moo Mart” and “Moo Muffin” factory, Donald Duck and Willie the Giant own farms (24). The villagers trade and pursue their vision of the good life, but they are also altruistic, helping each other out and coming together to solve problems. There is no state because nobody uses or threatens violence.

On Brennan’s account, the anarcho-capitalist Clubhouse Village is founded on moral principles of voluntary community, mutual respect, reciprocity, social justice, and beneficence (29-34). In the village, “the norms of trade, private property, respect, and so on, ensure that everyone has sufficient opportunity, wealth, and freedom to have a good chance to live out his or her individual conception of the good.” (33) This is bolstered by the moral virtues of the villagers who treat each other as ends in themselves and celebrate each other’s diversity. They help each other because they value their relationships and care about each other. Brennan claims that his five principles “are in some deep sense anti-socialist” (35) since socialists are motivated toward productivity by envy (34) and by “some mixture of fear and greed in proportions that vary with the details of the person’s political position and personal character.” (35)

Brennan’s parody of Cohen is not analogous. Brennan claims that Cohen’s first fallacy is to compare an ideal vision of socialism to a realistic account of capitalism. This is inaccurate. Many of us have experienced camping trips that roughly resemble what Cohen describes. Cohen is inviting us to examine the moral principles of a real socialist camping trip to assess a real larger capitalist social and economic system and to suggest that it would be better if an alternative system could realize the camping trip’s moral principles. Cohen’s account of capitalism as a system that celebrates greed (Cohen 2009, 41) is close to how capitalism is commonly understood by its advocates. Brennan defines a social system as capitalist insofar as it has private ownership of the means of production, freedom for people to make contracts, and the absence of monopolies or subsidies (63-4). He denies that capitalism is “analytically tied to greed and fear” (63) or indeed to any particular motives. This neglects the role of competition as a basic aspect of capitalism and ignores how a principal defense of these economic arrangements is that market competition allows self-interested people pursuing profit more efficiently to produce and allocate goods.

Second, Cohen chose his camping trip example because it allowed him to extrapolate moral principles (equality, community) and collective control of property as necessary features of a desirable camping trip. Contra Brennan, Cohen distinguishes between principles and modes of organization (Cohen 2009, 22). He just does not believe that socialist principles can be realized under capitalist modes of organization. In contrast, the Clubhouse Village utopia does not require capitalism (78) – what makes it attractive is not private ownership of property and the profit motive but the aspiration “to extend community, respect, reciprocity, social justice, and beneficence to the whole of our economic life.” (46) Cohen may be wrong that collective property is conceptually necessary to a successful camping trip and that socialist principles can only be realized in a socialist economy, but his reasoning is not fallacious.

What about Brennan’s positive case for capitalism? Brennan suggests that Cohen’s legacy will help us see that “the best possible world is capitalist, not socialist.” (47) On Brennan’s account, private property allows people to pursue projects by giving them control over their resources. Markets provide crucial information about the relative scarcity of goods, a point that holds even under ideal circumstances. Capitalist utopia would produce more than a social utopia without markets, leading to more positive freedom. The benevolent character of the residents of the Clubhouse Village would ameliorate any unfortunate side effects of markets or the temptation to use economic power to coerce or to exploit others. Finally, in capitalist utopia, people can voluntarily form communities with diverse social and economic principles. Cohen can have his camping trip and Clarabelle can have her muffin emporium and they both can co-exist in respectful tolerance.

Brennan follows Cohen in maintaining that there is a sharp distinction between fact and value and he insists that his book is “a moral rather than merely an economic query.” (21) However one views this metaethical debate about justice, facts matter deeply for the debate between capitalism and socialism as economic systems. The debate between socialism and capitalism is not primarily a battle over ethical principles; rather, it is about institutional design. Brennan and Cohen do not fundamentally disagree about the principles for an ideal account of justice. The problem is that there is fairly little that any ideal system of justice can tell us about how its principles should be realized in the real world.

Brennan recognizes this when he accuses Cohen of ignoring what social science tells us about how market societies affect people’s motivations. He does not appear to see how his focus on ideal capitalism undermines why many people find actual capitalism attractive – its feasibility compared to the alternatives. Cohen’s Why Not Socialism? has the virtues that it provides a sharply argued case for radical egalitarianism and community as a moral ideal and makes the case that a socialist economy, at least on a small scale, is necessary to realize this ideal. Why Not Capitalism? does not successfully rebut Cohen. Moreover, by stipulating a libertarian moral ideal loosely attached to an ideal form of capitalism, it does little to advance the debate.