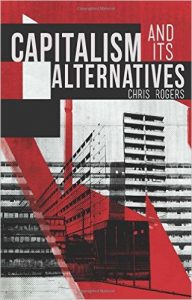 Chris Rogers
Capitalism and Its Alternatives

Capitalism and its Alternatives is a dense and detailed interpretation of differing theories of capitalism and possible alternatives. Rogers, drawing upon the Open Marxist tradition highlights varying understandings of capitalism and provides solid analysis, alongside biting critiques. The central argument of the book is that capitalism has an intrinsic tendency towards crisis that makes an alternative to the system both desirable and justifiable (4). The interrelation between these two points serve as the benchmark for much of the material, most arguments and analysis presented come back to justifying this central insight.

The book is structured into four chapters with a lengthy introduction and conclusion. Chapter One focuses on four different theories of capitalism and is presented through the ideas of a proponent of each school of thought. Chapter Two analyses the crisis prone nature of capitalism and the responses to it. Chapters Three and Four move the focus to alternatives and provide in depth analysis of a number of anti-capitalist perspectives. The conclusion builds upon Rogers’s central point about the need for an understanding of capitalism as a crisis prone system that inevitably brings about opposition to it. However, the form this opposition takes is of great importance and Rogers is keen to stress the merits of an anti-capitalism informed by the work of John Holloway.

The approach in Chapter One is quite novel. Rather than a lengthy exposition of the whole edifice of capitalism, Rogers utilises four figures as a platform to display core ideas of capitalism. There are sections on Adam Smith, Karl Marx, John Maynard Keynes and Friedrich Von Hayek. These ‘Four Faces of Capitalism’ as Rogers’s terms them help him characterise much of the theoretical underpinnings of capitalism. This approach works well because it allows Rogers to provide a theoretical and empirical analysis of capitalism, which shows the evolution of our understanding of ‘commercial society’ or ‘generalised commodity production’. It also helps expand upon the analysis of Chapter Two on crisis, as each thinker to a certain degree engages with the idea of trying somehow to solve and explain the problems of capitalism. This is especially true of Keynes and Hayek whose theories were borne out of a need to try to avert crisis in the future by conceiving of ideal notions of how capitalism should function. There are discussions relating to Keynes’ work in response to the Great Depression and Hayek’s response to the collapse of the Bretton Woods system.

The use of Smith and Marx is somewhat different: both presented a fundamental theorisation of capitalism but neither were concerned particularly with a practical response to capitalist crisis. Smith’s political economy was one that set about criticising mercantilism and trying to explain the emerging market systems of the 17th and 18th centuries (19-20). Marx was far more concerned with critiquing Smith’s political economy and demonstrating that capitalism relied upon a fundamental exploitation of the working classes (27). It is the critical insight of Marx’s work that Roger’s draws upon in his analysis throughout the book.

The focus in Chapter Two is to incorporate the ideas of capitalist functionality discussed in Chapter One with a specific focus on crisis. The three crises discussed are the Great Depression, the breakdown of the Bretton Woods system and the 2007-8 recession. Rogers contemplates the ideas of the thinkers (excluding Marx) in relation to these crises, and highlights that each of them fails to provide an adequate long-term response to crisis, and that in trying to respond to one crisis, they inadvertently plant the seeds of the next one. This is because, as Rogers notes, none can account for ‘the inherent tendency towards crisis in capitalism, which stems from capital’s simultaneous dependence on the reproduction and the destruction of living labour’ (72). Rogers point reflects the Marxist critique of much liberal economic theory and its preoccupation with functionality rather than causation. He presents the Marxist interpretation of crisis as one that is far more concerned with demonstrating the systemic contradictions that exist within capitalism, particularly those related to the antagonistic relationship between capital and labour and the fundamental problem this poses for accumulation (74-5).

Chapter Two provides the most rewarding read of the four chapters. The formal focus on historical crisis is detailed and well made. However, it is when Rogers engages in critique that he comes into his own, providing details on the reasons behind each crisis which he does not over-complicate. His fundamental point is to reiterate the contradictory nature of the social relations upon which capitalist accumulation rests. The focus on the dynamic between capital and labour serves to highlight why liberal thinkers like those discussed above are unable to account for a stable variant of capitalism; they remain fundamentally embedded in a naturalistic interpretation of this relationship, one that seems unable to account for its contradictory nature. Hence their responses deal with capital in an idealised fashion that assumes that a certain tweaking of the system can account for the problems caused.

Moving on from capitalism per se, Rogers begins discussing alternative forms of capitalism in Chapter Three. This begins with an account of libertarianism drawing on the work of Hayek and Robert Nozick. He then presents analyses of cooperativsm, specifically the ideas of Robert Owen, and then socialist forms of society, mainly focusing on social democracy of the 20th century. In each case Rogers presents a for and against style of engagement, first of all noting the core tenets of each idea and then providing a critical interrogation of its ideals and how it has fared practically.

Of particular interest is the section on socialism. It provides a useful counterbalance to the often utilised ideals of the post war consensus, namely that nationalisation was a wholly socialist ideal at the time. Drawing on the work of Simon Clarke, Rogers notes that nationalisation in the aftermath of the Second World War can be attributed as much to the necessity of trying to maintain a competitive economy and trying to slow down the decline of British heavy industry (106). The socialisation of industries in times of crisis can thus be viewed as a practical consideration of any government no matter what its ideals, the overriding consideration being to preserve a certain level of economic stability.

The final chapter discusses the various ways that capitalism can and has been resisted (114). Rogers’s draws upon Open Marxist interpretations of the state to reiterate that the state cannot be seen as an autonomous arena of society but rather as the product of the social relationships that give rise to it and make it up – as such it must be viewed as a capitalist state (114). This insight helps shape the nature of Rogers’s criticisms of other anti-capitalisms and establishes his own as one that is sharply focused on the state and the social relations that govern in and through it. The state cannot be harnessed or ignored, it must be countered through an opposition to the relations that constitute it. This argument reflects the work of John Holloway whose ideas regarding resisting the notion of power form Rogers own variant of anti-capitalism (141). Alongside this there is good analysis of many of the Communist movements of the 20th century alongside the theories that made up their ideological outlook.

This chapter and the conclusion provide a good examination of the problems and issues of anti-capitalism. Rogers’s arguments are persuasive and it is refreshing to see a book that does not simply conflate all anti-capitalist struggles and movements under the umbrella of the official communist movements of the 20th century. Whether one agrees with the Holloway variant of anti-capitalism or not, it is one that has been inspired by the diverse trends of modern struggles.

A point that could have been discussed at greater length is the problems that many of the modern networks have encountered, namely that like their predecessors in the 20th century they have continually been co-opted into the mainstream political discourse: I think here principally about movements such as Occupy and Indignados. Why is it that movements that have sought to follow a style of resistance similar to that which Rogers favours, have been so easily co-opted into parliamentary routes to power that have proven so ineffective in the past? There is no denying the question of organisation is vital, yet it has not proven itself a successful counterweight to the allures of power that imbued many movements of the past.

Leaving this minor quibble to one side, this book is a rewarding read. The strengths are no doubt the focus on the importance of social relations, a focus that helps clarify and explain the inherent crisis tendency of capitalism and how an alternative could be realised. This is the central aspect of Roger’s analysis, namely the need to understand the social relationships that govern our everyday existence. Whether it is going to work, shopping or going on holiday we are engaging in the continued reproduction of a certain set of relationships. It is this continued act that allows capitalism to persist as a system. Any alternative to it must take into consideration the need not only to abolish this relationship but also to present a viable alternative. Such a task remains at present wholly implausible, yet the strength of this book is that it highlights the ever continuing tendency of capitalist crisis. Consequently there is no doubt that the struggles that capitalism gives rise to will continue to create opportunities for dialogues and for the development of ideas for presenting and realising an alternative.