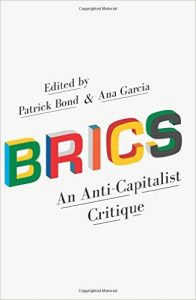 James Parisot is a PhD Candidate in Sociology at Binghamton University. He has published on …

It appears global capitalism is going through a fundamental transformation. Gone is the era of the American ‘unipolar moment’. Instead, while the United States remains dominant, rising powers, particularly the BRICS (Brazil, Russia, India, China, and South Africa) are building new political alliances and economic relations, suggesting a shift towards a multipolar world. On one hand, some scholars have argued this to be a cause for celebration. Western hegemony was always armored with the force of imperialism, forcing underdevelopment upon the global south since the age of colonialism. In this case, the rise of the south may structurally challenge centuries of western domination. On the other hand, some argue that the BRICS are not providing an alternative to neoliberalism; rather, they are reproducing relations of unequal exchange and uneven development, albeit in south-south (or east-south) rather than north-south forms.

What does this mean for the international left? Should we celebrate the rise of the BRICS as an alternative to western imperialism? Or condemn the involved states for failing to provide an alternative to the unfettered domination of global neoliberalism, but simply modifying its form?

This book is the most significant work yet published to examine these issues through a critical lens. It features essays from leading leftist scholars across the world such as Patrick Bond, Immanuel Wallerstein, Leo Panitch, William Robinson, Elmar Altvater, and Vijay Prashad, among many others. The overall shape of the volume is laid out in the introduction, written by the editors. Here, the authors document the currently existing positions on the BRICS: from those who celebrate it, are cautious of it, to those who criticize it. It provides a useful and comprehensive overview of the current state of debate on the topic and provides a clear way to introduce the volume. The rest of the book is divided into three sections.

The first, titled ‘Sub-imperial, inter-imperial, or capitalist-imperial?’ examines the rise of the BRICS in light of the reorganization of world imperialism. Highlighted especially throughout these essays is a revitalization of the concept ‘sub-imperialism’ as originally conceived in the 1960s Ruy Mauro Marini, to make sense of the role of Brazil in Latin America. Bond, for example, sees sub-imperialism as defined by what David Harvey called ‘accumulation by dispossession’, overaccumulation and uneven development, and the use of neoliberal policies by countries previously subjected to their impositions in order to strengthen their position within the global neoliberal hierarchy, rather than replace it. For Bond the BRICS seems to be creating new relations of sub-imperialism, as participants use the meetings and emerging institutions as a way to solidify their regional and international sub-imperial positions. This is further developed by Mathias Luce who argues that sub-imperialism is ‘the highest stage of dependent capitalism’. In other words, BRICS countries continue to be dominated, or incorporated into the western order, at the same time they dominate countries below them in the global inter-imperialist chain.

The second section of the volume is titled ‘BRICS “develop” Africa, Latin America and Eastern Europe’. This section focuses on the ways that, rather than looking for a more ecologically sustainable developmental path, the BRICS are using resource extraction as central to increasing their positions in the international hierarchy of global capitalism. Discussed in this section, for example, are the ways that Chinese, Brazilian, and Indian investment in Africa, while bypassing Washington Consensus style conditionalities, do not necessarily provide an alternative to them for the people of Africa. The main interests of these countries, and their businesses, in what has been called the ‘new scramble for Africa’, rather, has been less about helping poor countries ‘develop’, so much as accessing the resources of these countries, at the expense of human rights, to fuel the continued growth of the sub-imperial powers. And as Omar Bonilla Martinez points out, the same relationship has occurred in China-Latin America relations in the Andean region, as China’s main interest has been in oil and natural resources, at the expense of indigenous peoples, who are being deprived of their land and livelihoods. Two of the articles in this section also discuss Russia. Russia’s development under Putin has been based upon oil and gas in Russia itself, and Russia’s participation in the BRICS has gone along with Russia increasingly asserting its regional control in Eastern Europe and Central Asia, as seen in its activities in Ukraine and, for example, the creation of a Eurasian Economic Union. Overall, this series of papers empirically highlights the ways that the BRICS, far from providing an alternative to neoliberalism and imperialism, are simply reorganizing their shapes.

The final section, ‘BRICS within global capitalism’, consists of a diverse series of short essays by leading scholars debating the significance of the BRICS in global capitalism. This section is particularly useful for showing the ways that different theoretical persuasions lead to differing analyses of the current global conjuncture. It contains short pieces from, for example, William Robinson, leader of the global capitalism school, who emphasizes the importance of the transnationality of capital, and Immanuel Wallerstein, founder of world-systems analysis, who sees the BRICS as one component of the broader decline of US hegemony. In contrast, Ho-Fung Hung emphasis the continued salience of American power, particularly as the role of the dollar remains unchallenged, and Vijay Prashad sees the Bolivarian Alternative of the Americas (ALBA), resulting from Latin America’s ‘pink tide’, as a predominant alternative to neoliberalism in contrast to the BRICS which have failed to provide a counter-hegemonic set of policies to challenge the power of global neoliberalism.

Overall, BRICS: An Anti-Capitalist Alternative is required reading for anyone concerned about what the development of the BRICS means for the global proletariat, and for the structure of the capitalist world order more generally. The difficulty of the volume is also its biggest strength in that, while many diverse perspectives are expressed, it can lead the reader to be somewhat bewildered as to what to make of the BRICS, and the shape of the capitalist world order. Just as importantly, left open is the question how to make sense of the BRICS, particularly in relation to the possibility—or not—of US decline. In other words, many theoretical frameworks are used, but, given the shortness of the essays, a space is not provided to examine them critically against each other. This could be particularly difficult for students new to the topic, as the volume includes very short essays underlain with fundamentally different conceptual frameworks, which only experts in the field who have read more substantial works by the included authors might fully understand.

But even with such a diversity of perspectives a relatively clear picture emerges on which, it seems, the global left agrees: the BRICS do not provide an alternative to neoliberalism. Rather, their main goal is to reposition themselves within it, in doing so continuing to cooperate with the west while, simultaneously, gradually undermining centuries of western domination. The risk that emerges is an even more authoritarian form of global capitalism that is continually dependent on increasing amounts of resource extraction in a world with decreasing amounts of available resources. But if, as this volume suggests, the BRICS are simply intensifying the contradictions of capitalism on a global scale, what might an alternative be? This, perhaps, would be a question for a subsequent volume.