Marx & Philosophy Review of BooksReviews‘From Communism to Capitalism: Theory of a Catastrophe’ reviewed by Michael Laurence 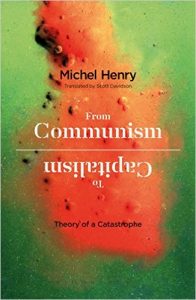 Michel Henry
From Communism to Capitalism: Theory of a Catastrophe

Michael Laurence is a PhD candidate in Political Theory at Western University, Canada. He teaches …

First published in France in 1991, From Communism to Capitalism is finally available for the English speaking public thanks to a superb translation by Scott Davidson. In it, Michel Henry builds upon his earlier developments on the political thought of Marx, the philosophy of life, and the destructive rationality of modern science and technology. The result is a deeply textured and multifaceted work that embodies something of a culmination of Henry’s political ideas; a definitive statement of his political philosophy. It takes the form of a passionate and powerful meditation on one of the most decisive moments in the political history of the West: the collapse of twentieth century communism. Henry’s main thesis is that the fall of communism was not an emancipatory event, but rather, a catastrophe that merely substituted one destructive and life-negating regime for another. Both communism and capitalism, Henry writes, are ‘…eaten away by the same evil… the elimination of subjective life and the living individual’ (10). Under communism, a series of abstractions (i.e. party, class, proletariat, history, and so on) were placed at the source of social organisation, resulting in the devaluation and destitution of the living individual. In practice, this devaluation could take on many forms, including human rights violations, arbitrary arrests and abuses of power by the state, the creation of a general climate of fear and suspicion, and the fostering of what Václav Havel once described as a socially pervasive and life-denying servility and blind automatism (125). Under liberal capitalism, on the other hand, the market economy destroys life by substituting for it an altogether different set of dead abstractions: money, value, capital, profit, investment, the market, etc. (10). Life under capitalism is colonised, exploited, and used up. Nothing is left over. Life is literally worked to death and at all times subsumed by the reign of a market that knows no bounds. Under both communism and capitalism, writes Henry, the same monstrous process takes place: life is negated, sacrificed, and liquidated in the name of an empire of abstract ideas.

There can be no doubt that Henry’s text speaks to us with a profound urgency today. It reaches us at a historical moment when the institutions and culture of neoliberal capitalism appear to be all pervasive and inescapable. British theorist Mark Fisher has convincingly and entertainingly compared neoliberal capitalism to The Thing from John Carpenter’s classic 1982 horror film: it is infinitely plastic and seems able to devour and absorb anything in its path (6). Indeed, it would appear that capitalism has completely absorbed our horizon of sense and possibility, making it difficult to even think of an alternative configuration of reality. At the scale of living individuals this drama of subsumption enacts a condition of desperation and desolation, the production of an interior wasteland that corresponds with a world levelled by capitalist accumulation and exchange. Henry’s text offers a unique lens for understanding the nature of this wasteland and the living death that we are condemned to experience under capitalism. This is the book’s major contribution to political thought: its diagnosis and discussion of life under contemporary capitalism as a form of living death, as opposed to some kind of emancipatory or existential victory over historical communism. The liberation promised by capitalism proved in the end to be little more than another form of imprisonment. Like Samuel Beckett’s Godot, liberation never came, and we are left to wonder with Vladimir and Estragon: how long can we go on like this, trapped between the hopes of the past and a future that refuses to arrive?

As a diagnostic tool, Henry’s book is uniquely powerful. Yet perhaps the most important political question we can ask is whether it offers useful tools for thinking and moving beyond neoliberal capitalism? Does it call forth a post-capitalist future or does it remain entrenched within and committed to existing forms of reality? To answer these questions we need to look closer at the ontological basis and structure of Henry’s arguments. In particular, we need to ask what Henry’s conception of life can and cannot do politically. The entire text hinges on this conception.

For Henry, life ‘has nothing to do with the life that biology studies (14).’ It cannot be explained through reference to the material world. Atoms, molecules, cells, acid chains, and neurons cannot account for human life. In fact, historical and existing forms of objective and scientific knowledge (i.e. physics, chemistry, biology, history, law, the social sciences) constitute, for Henry, systems of abstraction and de-realisation that take the place of life through an act of murderous substitution (116). Life, for Henry, must be saved from this tyranny of objectivity. It should be understood as an invisible and irreducible experience, an inner experience of itself (83). In this way, life eludes every gaze and flees all visibility. It has to do with radical interiority, with the experience of oneself in suffering, in action, in satisfaction. Its essence is to ‘feel oneself’ (101). As such, life only exists for individuals. All life is necessarily subjective (15). Henry argues that this notion of life is at the core of Marx’s thought on the economy. He argues that for Marx, ‘all reality resides in the life of individuals, and all actions reside in their effort, their subjectivity and their living corporeality’ (31). In this way, society, when conceived of as an abstract and primary totality, is non-existent (28). The problem with historical communism, and the system of thought (Marxism) upon which it was based, was that it insisted upon abstractions such as society and class as having more reality than living individuals. It replaced the living individual with a series of abstract entities (26-27). For Henry, this process of substitution makes possible the genocidal elimination of human beings in the name of the people, society, history, class, and so on. Capitalism, on the other hand, performs a similar elimination of life by unleashing a technological process that results in its enslavement to the production of money and profit (74-75).

Henry’s ontology of life allows for a powerful condemnation of capitalism as an economic and political regime that stands against life. Yet it becomes less clear what this conception offers in terms of ideas and strategies for going forward, for making an exit from the living death that capitalism brings forth. I want to suggest that Henry’s text is problematic on this point. It leaves the reader immobile and without a sense of collective future. It does this by relapsing into nostalgia for a pre-scientific and pre-technological age freed from the tyranny of dead abstractions. Modern technology, cries Henry, causes subjectivity to disappear by reducing life to a system of ‘physical-mathematical’ knowledge concerning the material world (83). From Galileo to contemporary biology, Henry seems willing to see only the violence and perversion of a murderous objectivity that opposes life. The increasing automation of the labour process signifies, for him, only a dystopic and disastrous process whereby human beings are excluded from both work and income, as well as tyrannised by a world of non-human objects (114). Yet why should the automation of work not be desirable under certain conditions? Why shouldn’t automation be used in the service of socialist and egalitarian ends? And why should we continue to praise the dignity of labour as a value in itself? Why not aim to develop and create a post-capitalist society where human beings can be freed from necessary and coerced labour in order to pursue activities of their choosing? An affirmation of scientific and technological development would be crucial for the realization of such a project. Henry’s project, on the other hand, seems to categorically refuse such an affirmation. Furthermore, is it really the case that all forms of abstraction, all forms of scientific and technological knowledge, necessarily constitute an assault on the living individual? There is, I believe, little fidelity to Marx on these points. Indeed, Henry often urges upon the reader an anti-scientific and anti-technological reading of Marx that depoliticises and incapacitates him. His reading of Marx, despite its compelling force, wipes from the table Marx’s affirmation of the scientific and technological development that industrial capitalism makes possible, and without which, the emancipation of humanity could not take place. Collective freedom is unimaginable for Marx without the technologies and tools that capitalism itself has forged. He is clear on this point even in his early writings. In The German Ideology he proclaims that liberation is a historical act brought about by historical conditions such as the development of commerce, industry, and so on (169). The problem goes even deeper than this. At times, Henry seems to empty Marx of nearly everything but a paradoxically abstract, mystical, and transcendental conception of life. He enlists Marx as a mystic and movingly refers to life as ‘the mysterious and magical power that carries us like deep water’ (114). Yet is the power and utility of Marx’s work really to be found here – in transcendental mysticism? I do not think so. In fact, Henry’s reading of Marx misses one of his most important historical and political insights: his theory of the formation of the subject.

Who is the subject of capital? Who comes after the subject of capital? For Marx, a collective subject emerges and takes shape through conflict in capitalist society. History is the process by which this subject becomes itself by means of overcoming that which it was before. An assemblage of self-interested individuals mutates into a collective communist force. The subject is therefore not a mystical entity that is either repressed or respected in society. Instead, the subject is that which is perpetually being constituted or de-constituted.

By placing life out of reach, beyond both thought and the process of subject-production, Henry has turned away from politics itself. For politics today concerns the processes by which human beings are constituted or refuse to be constituted as particular kinds of subjects. Politics, before all else, is a battle over what we are and what we might become.