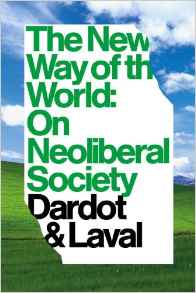 Pierre Dardot and Christian Laval
The New Way of the World: On Neoliberal Society

Adam George Dunn is a Teaching Fellow at the Winchester School of Art. …

Dardot and Laval have produced a careful, readable and sensitive account of the history of neoliberal thought, its genesis in classical liberalism, and its relationship to practice. From the very beginning, the book is careful to distinguish between rhetorical and ideological elements of neoliberalism. One of the main targets of this book is the idea that ‘neoliberalism’ is just the ‘return of the market’ (148) and nothing more. Instead, the book argues, neoliberalism needs to be treated as a much more substantial change in the way persons are thought of. The book also presents the ways in which neoliberal ‘transactional’ thinking gradually expands to all sorts of human activity, and the idea of selfhood that underlies this.

The clarity of this book makes it a safe choice for either an advanced undergraduate or a postgraduate class. The narrative through-line is very useful in this regard (either half of the book might be used on its own, depending on the desired focus). The book is also likely to be a useful reference for anyone working on the areas covered.

The picture of neoliberalism Dardot and Laval give treats it not as a purely economic doctrine but as the ‘rationality of contemporary capitalism‘; at base, it is a rationality ‘of competition as a behavioural norm and of the enterprise as a model of subjectivation’ (4). Using this understanding of neoliberalism as part of governance is where Dardot and Laval’s debt to Foucault is strongest, and they make good use of it throughout the book. Whilst Foucault is a key resource here, it’s not as though the book is merely a reheat of Foucault’s treatment of neoliberalism – plenty of new ground is covered here. Dardot and Laval spend much more time than Foucault with neoliberalism ‘in practice’ (having the advantage of writing decades later), and also provide a thorough historical account of its development.

The book is divided in two parts, followed by an overall conclusion. The two parts: ‘The Intellectual Reformation’ and ‘The New Rationality’. The first part gives Dardot and Laval’s argument that neoliberalism is a ‘distance from, even a clear break with’ (17) earlier liberalisms, placing its birth as a doctrine in the 1930s, as a response to that decade’s crises. The second part treats neoliberalism as a new regulatory and ideological regime, taking in changes to the relationships between market, state, and self.

So, to start: the historical part of the book. The very beginning of this is a brief discussion of tensions within liberalism that pre-date the development of neoliberalism, framed by discussions about government interventions in ‘economic and social issues’ (22). The protagonists of this first round of disagreement include John Stuart Mill, de Tocqueville and Spencer; the ground of the disagreement is the correct relationship between collective and individual goods (26). Spencer’s role is to defend the free market on the grounds it matches the behaviour of nature and ought therefore not be interfered with (28-9). The main purpose of this chapter is to generate the genealogy and context of neoliberalism, ending with Polanyi. It does so clearly, presenting the disagreements involved efficiently and culminating in a critique of Polanyi on the basis that he noticed but underestimated the possibility of interventions designed to help ‘market operation’ (44ff) This is a central feature of neoliberal (and, in its own chapter, German ordo-liberal) thought that the book focuses on repeatedly.

This leads to the chapter on the Walter Lippmann Colloquium (1938), which Dardot and Laval claim was the ‘founding moment of neoliberalism’ (49); this saw participants turn against the ‘liberal mystique’ that saw ‘inviolable natural laws’ as the model for understanding social interactions, and economics as a politically neutral sphere best left alone (57). The chapter that follows, on ordo-liberalism and the post-war reconstruction of West Germany, shows attempts to rebuild a market economy on the basis of this understanding of the state as supplier of frameworks for the sake of society and economy.

The short penultimate chapter of this part, ‘Entrepreneurial Man’, returns to the theme of individual-group interaction to show its centrality to the neoliberal project. This rests on von Mises’ scepticism about the limits of human knowledge, and the need therefore to rely on individuals’ self-interested knowledge (110).

The second half of the book moves into the 1980s and 90s. Dardot and Laval are careful at this point to stress that they are not giving a one-way account of the influence of doctrine on practice, but instead detail a ‘multiplicity of heterogeneous processes’ that lead to ‘a new governmental rationality‘ (17).

The first chapter details what Dardot and Laval call the ‘great turn’, in which neoliberalism’s triumph saw it become the background understanding of both the right and the left. The most interesting part of this chapter deals with the discipline system of opening individuals to market competition, to self-monitoring and universal entrepreneurship (168ff)

In the chapters that follow, Dardot and Laval discuss this turn ‘in action’. First they show the contributions of ordo-liberalism to the post-war reconstruction of West Germany and, through that, an idea of this strain of neoliberalism as a ‘hidden tradition’ contributing to the EU (205). That leads through an image of legal regimes as competitors in a marketplace, to settle into a discussion of ‘entrepreneurial government’.

In the final pre-conclusion chapter, there is a change of focus, and the book moves away from a ‘group-level’ view of neoliberalism to consider the individual subject of neoliberalism and the norms underpinning it. Most sections of this chapter move through the various characteristics of the neoliberal conception of the subject, starting with the idea of the individual functioning like an entrepreneurial firm (264ff) Also featured: the neoliberal versions of self-discipline and -management, risk, accountability, and – a constant theme throughout – the importance of competition.

This culminates in an attempted ‘clinic diagnosis’ of the neoliberal subject (288ff), tracking the effects of seeing and treating individuals in this way, and the damaging contradictions of neoliberal selfhood. The theme throughout this section is one of ‘erosion’; erosion of autonomy, of personality, of institutional ideals (288-93). But this is placed alongside the boundless conversion of all things (and persons) into exchange relations, but exchange relations based on quanta of ‘pleasure’, of surplus (295-6). This part of the chapter is avowedly Lacanian at base, and is one part of the book that would require careful guidance if used within a degree module. (It is perhaps slightly too compressed towards the end of the chapter.)

The self-valorization discussion takes ‘Bob Aubrey, a Californian international consultant’ and his writings as its primary example. And this is a compelling illustration of the ethos Dardot and Laval describe, one which they claim ‘makes work the privileged vehicle of self-realization: it is by succeeding professionally that one makes a ‘success’ of one’s life’ (265).

The concluding chapter, subtitled ‘the depletion of liberal democracy’, does well in bringing together the various threads in the book in succinct fashion. But this is also the chapter that makes the clearest ethical case against neoliberalism as an anti-democratic species of governmentality. Although the subtitle suggests their concerns are limited to the fate of liberal democracy, the bulk of the chapter makes it clear that Dardot and Laval have a much broader set of concerns than that, making good the book’s promise to deal with ‘neoliberal society’.

This includes a welcome discussion of the impact of 2008’s financial crisis on the state-market relationship and the organisation of capital, beginning with the claim that we are ‘definitely entering a new phase of neoliberalism‘ (308). The book was released in French in 2009; things now seem much more like a return to business as usual than they perhaps did at the time. But Dardot and Laval are at any rate not starry-eyed about hopes for the future – this discussion shows the resilience of neoliberalism in practice, and sometimes in combination with seemingly contradictory doctrines like neo-conservatism’s moralised view of the individual (310).

The last ten pages close the book with the potential for a left-wing response to neoliberalism, beginning by noting Wendy Brown’s caution that a mere strategic defence of liberal democracy against an authoritarian managerialism will not do the job; Brown fears this reduces the left to ‘a party of complaint’, and Dardot and Laval have the same fear about Marxist critiques of merely formal democracy (311). By now, they claim, such a complaint is already too late.

What is needed instead, Dardot and Laval argue, is a more thorough-going critique, one that recognises just how deeply neoliberalism has sunk its roots, and how well it marries the governance of others with self-governance (316). They point pessimistically to a need for a new form of subject, one that cannot be presumed already to exist, and merely in need of somehow being woken up; by the end of the book, the only way out they can see is a refusal to play the game of treating oneself and others as enterprising competitive firms (320). This alternative is summarised in the last line of the book: ‘mutual aid and cooperative work … a different world reason … the reason of the commons‘ (321).

Long on diagnosis and short on cure, this is a very powerful and well-researched account of how neoliberalism came into being. It would be churlish to expect, on top of this, a solid plan of action for how to fix the world. The book’s virtue is that it provides a clear account of neoliberalism’s development, demonstrating its newness in a way likely to be useful.