Marx & Philosophy Review of BooksReviews‘Blowing the Roof off the Twenty-First Century: Media, Politics, and the Struggle for Post-Capitalist Democracy’ reviewed by Benjamin J Anderson 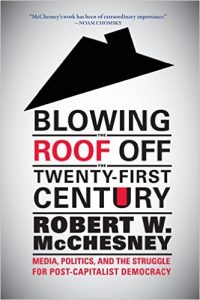 Robert W McChesney
Blowing the Roof off the Twenty-First Century: Media, Politics, and the Struggle for Post-Capitalist Democracy

Consistent with his characteristic jargon-free, readable style, Robert W. McChesney’s new collection, Blowing the Roof off the Twenty-first Century: Media, Politics, and the Struggle for Post-Capitalist Democracy, is a deep yet accessible primer for his decades of work on journalism, politics, and political economy. The volume showcases over a decade of McChesney’s work and provides overviews and additions to some of his most important contributions during the period, including The Death and Life of American Journalism, Digital Disconnect, and Dollarocracy. Useful for the academic and the casual reader alike, McChesney’s new book sets the stage for a critical engagement with the current state of American politics, media, and economics.

Broken into four distinct sections, the book opens with a prescient analysis of Ralph Nader’s 2000 Presidential run. The chapter, although historically anchored, has a contemporary resonance as McChesney’s critique of neoliberal political economy and his practical and hopeful suggestions for a new left coalition correspond with the unprecedented success of the Bernie Sanders campaign that we are currently witnessing. Ultimately, McChesney asks how the American public can be challenged to rise above the depoliticization enforced through electoral politics, the dismantling of social services, and the corporatization of the media. The influx of corporate control over media, politics, and, subsequently, citizen’s rights to self-organize becomes starkly evident in the author’s analysis, bolstered by his allusion to the popular movements that followed the 2008 economic crisis. Central to the first section is the idea that the Democratic Party is not a left party and that, as such, some left alternative must be found, electorally or otherwise – a theme that is repeated, and appropriately, throughout the volume.

The author continues his exploration of this potential political alternative by mobilizing Baran and Sweezy’s understanding of the New Deal to argue that increases in social spending are not only needed but possible, even when opposed to the interests of monopoly capital. True to McChesney’s practical style, he complements his argument with a list of policy recommendations including the creation of a state provided living wage, an extension of unemployment compensation, a progressive tax system, and a reduced work week. His proposals are augmented by an overview of the contemporary progressive policy platform and the strategies by which such a platform could be instrumental in undercutting corporate power from within the current capitalist system. To say that such a proposal is too kind to capital would be unfair as McChesney bases his analysis on the historical formation of left coalitions and the ways in which these efforts have resulted in progressive reform. A united front in terms of policy, the argument goes, would lead to positive changes for all. Of course, there is a markedly social democratic trajectory to these proposals, one that attempts to humanize capitalism while waiting for its eventual fall under its own contradictions. “If that moment is at last before us,” McChesney argues, “it is imperative we put our minds to work on what comes next as we organize to get there” (68).

One should not be too hasty in labeling the author as an optimistic reformer, for he pulls no punches in critiquing the current state of the American electoral system, the United States’ far-reaching military establishment, and its position as the lead incarcerator of its own citizens worldwide. This critical thrust begins with an overview of what McChesney calls “Dollarocracy,” which we can understand as the corporate takeover of the electoral system paired with the imposition of market logics in public life. This marketization of democracy is endemic to the rampant depoliticization of American society. More, McChesney attempts to link this trend to the systemic nature of inequality, mostly in terms of wealth, but eventually also in terms of racism. As a whole, McChesney argues that “Dollarocracy exacerbates three threads to the survival of the [American] Republic: the environmental crisis, the military expansion, and the erosion of civil liberties” (86). These are not necessarily new claims and, indeed, the author relies heavily on his own previously published work to support them. This said, we should not discount these chapters as simple reviews of his preceding books. Although there is a great deal of overlap, the new chapters build the empirical case for McChesney’s arguments by employing current poverty and incarceration rates and how these relate to political engagement and voter turnout. Echoing the likes of Herman and Chomsky, McChesney also tracks the rise of the public relations industry and the sizeable investment that is central to the manipulation of public opinion. He does, however, stop short of grappling with a deeper critique of representative democracy, the kind one might find in the critical theory of the Frankfurt School. In arguing that the system is such that it is meant to limit participation, the author fails to ask whether participation is, in fact, always desirable.

This particular criticism aside, the author makes tidy work of laying out the mechanics of the American duopoly and the ways in which it’s systematized one-dimensionality reduces discourse, normalizes inequality, and homogenizes the political field to such a degree that “austerity principles have become the default position of economic debates within the mainstream because they reflect the values and interests of very powerful interests, of Dollarocracy” (97). Ultimately, the book’s chapters on American systems and policies attempt to dispel the myth of a functional liberal public sphere and, simultaneously, challenge the reader to consider alternatives, particularly some form of post-capitalist democracy.

The middle of the book gives us a glimpse of the author’s extensive work in alternative media and media reform as both an intellectual and an activist. This largely autobiographical section will likely be of more interest to the casual reader than to the student or scholar. It consists of an interview with Megan Boler, an extension of his previous work on the journalism crisis and the role of Walter Lippmann in the establishment of a liberal theory of journalistic practice, and, finally, a history of the author’s career as a radio host and his belief in the need for a progressive presence in community media. A hopeful glimpse at life as an activist, scholar, and public intellectual, the third section of the book is probably best left, for the purposes of this review, to the assessment and enjoyment of the reader.

All of this said, it is in the final section that McChesney makes what I see as his biggest contribution. He does this in his attempt to reconcile the work of Baran and Sweezy with the field of political economy of communication. The penultimate chapter entitled “The Cultural Apparatus of Monopoly Capital” brings Baran and Sweezy’s Monopoly Capital and it’s omitted cultural section, “The Quality of Monopoly Capitalist Society II,” into conversation with Bertolt Brecht, the critical theorists of the Frankfurt School, and Raymond Williams, among others.

As a whole, the chapter serves as a graceful call for media alternatives in building a resistant vanguard against the culture industry. In order to accomplish this, McChesney directly confronts the popular criticism of Baran and Sweezy, the charge of an analysis that neglects communication and culture in the reproduction of capitalism. Monopoly Capital, according to the author, emphasized “the importance of giant corporations operating in oligopolistic markets … [and] offered a very useful way to understand media markets” (189). Although the originally published version of Baran and Sweezy’s key work omitted a chapter on the culture industry, McChesney identifies the centrality of advertising in the text as evidence for a deeper recognition of the importance of communication than is commonly assumed. This focus suggests that Baran and Sweezy’s analysis reaches beyond a simple economic determinism, offering insight into the potential for policy fights in the present. McChesney continues by comparing the omitted chapter of Monopoly Capital to the cultural critics of the mid- to late- 20th century, even presenting the interpersonal connections between the authors and Marcuse and Lowenthal, among others. A key contribution, in McChesney’s view, is Baran and Sweezy’s early expansion of the concept of the cultural apparatus, following Brecht, Fromm, Mills and others. This conceptual history reveals not only the roots of critical cultural theory but also the emergence of the discourse of an alternative cultural apparatus, what many of us today might call alternative media. Seeing as this is a central component of McChesney’s work, his engagement with its evolution from E.P. Thompson to Raymond Williams, as framed through Baran and Sweezy’s political economic critique, adds a great deal of theoretical depth to his typical journalistic style.

McChesney leaves us with a hopeful outline for media reform intended to reinvigorate the left while simultaneously helping it catch up with the times. This reformist thrust, as previously mentioned, largely fails to recognize the multiple subjectivities that characterize contemporary social movements, relying on a common policy goal as a necessary ingredient for any serious movement. This instrumentality might not sit well with all readers, but McChesney also makes good work of calling for grassroots coalition building. “In view of the centrality of communication to the political economy,” he argues, “media reform activists have to pull their heads out of the beltway and start talking to the people who voted [for progressive candidates]. We need to capture the imaginations of people such that they believe politics can lead to radical improvements” (225). McChesney’s goals are laudable, and his policy proposals (breaking up monopolies, bringing journalism back into the public domain, etc.) are both admirable and achievable. Again, however, the reader wonders whether these goals fall short of challenging the larger structures of global capitalism. Would changes in the corporate media system, including its dissolution, lead us, as McChesney suggests, to a post-capitalist democracy? Would this shift manifest itself globally or simply in the privileged societies of the global north? They are, and it can’t be stated too strongly, steps in the right direction, and we should recognize that social change is a product of the struggle itself. In this way, McChesney does, in fact, make a valuable contribution to the search for alternatives to the contemporary global order. For in setting specific, achievable goals he presents the left with something to struggle for, with alternatives that might serve to galvanize some (though obviously not all), and that might inspire the critical imaginations of those who would continue to seek change, whether through policy or through other means.