Marx & Philosophy Review of BooksReviews‘Anywhere or Not at All: Philosophy of Contemporary Art’ reviewed by Devin Lefebvre 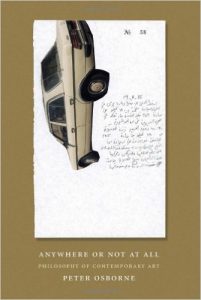 Peter Osborne
Anywhere or Not at All: Philosophy of Contemporary Art

Anywhere or not at all, as its subtitle suggests, is a philosophy of contemporary art, an art which Peter Osborne suggests, is badly known. (1) Too often denied a critical content and taken as a mere amalgam of all the art that is produced today, the sense of contemporary art erected by the dominant art discourses seems to stand as a strange double of modernism, only this time setup as an art that is implicitly defined through its antiquating of the art of the past. Now of course any art-critical approach to contemporary art needs to demand that the contemporary art-thing claim its contemporaneity over and against that of other works. But in this surely the newness of today is not sufficient. If contemporary art is to have a critical meaning, its break with modernism must be marked by more than a chronology that assigns the modern to yesterday.

Recognising this, Osborne’s solution in Anywhere or not at all – following both the style and content of Adorno’s Aesthetic Theory – is to propose a discourse of contemporary art that seizes on its own engagement with today as a present and a space that does not stand outside history. While agreeing with those who have already asserted that the problem of defining contemporary art is uncontroversially one of art-history, Osborne adds that for this to be true, they need to be mistaken about what they take to be art-history. Rather than being the history of the art historian, Osborne insists that this history must be a history that recalls Adorno’s laws of movement, a history that marks the struggle of art’s ontology, and that provides the space for its double character as both an autonomous thing and a social fact.

This in many ways is the most compelling aspect of Osborne’s text, contemporary art philosophy’s place in a world of commodity and exchange. Lacking any kind of isolating cynical shield, the autonomy of Osborne’s art, much like Adorno’s, is firmly tied to its production of meaning from within the everyday. As a result, the contemporaneity of his contemporary art-thing is bound to the phantasmatic singularity of the commodity form. What his text leaves us with is a sense of how the contemporary art-thing cannot but situate itself against and as commodity. A sense that its very contemporaneity is a reflection of its contradictory success in today’s world of curators, collectors, dealers and critics.

For Osborne, contemporary art is an art that, through its own sense of non-space, lives an implicated unity, a unity that is interpreted retroactively into each individual instantiation and which shares its cultural forms with a broader sense of photo-capitalism. (118-20) For him a critical discourse of contemporary art is one that while registering this facsimile, also mark the effects this ontology of art has on the character and experience of social space more broadly. The difficulty that Osborne sees with much of what today passes for critical contemporary art philosophy is not only that it tends to linger in the art of the past – and in this way takes on a marked artistic conservatism – or that it sets the contemporary as an equivalent to the new –but that it shows very little interest in the, undeniably capitalist, world of contemporary art itself.

Paying rough service to what he maintains is a crucial distinction between art and the aesthetic, the trend Osborne claims among today’s post-Kantian art philosophers – most notably Gilles Deleuze, Jacques Rancière, and Alain Badiou – is to treat the aesthetic as the sole feature of artistic significance. (8) Here the mistake that they make is to locate the basis of the art-thing’s autonomy, the source of its production of meaning, solely in the necessity of its ‘free’ appearance. (49) A misstep that not only casts as positive something which is instead highly relational and historical, but one that by assuming that art achieves its autonomy simply by eliminating its everydayness, its status as a social fact, risks losing sight of art’s driving duality. (140)

Against this aestheticizing trend Osborne instead claims that art’s autonomy, especially where its contemporaneity is concerned, cannot be separated from its heteronomy. In understanding what contemporary art is, the features and contradictions of today’s art industry – most notably its biennales – are productive and cannot simply be smoothed-over and ignored. For Osborne there is a triadic relationship between the art-thing, art-space, and institutional validation, in which the contradictions posed by art’s place in a transnational industry significantly alter the social conditions in which art’s autonomy is to be achieved. (165-7) Crucially for Osborne “the new international biennales of contemporary art are inscribed within an updated anthropological problematic of the plurality of cultures and the universality of sense.” (167) What art as aesthetics ignores are those effects that these features of contemporary art-space have on the very contemporaneity of the contemporary art-thing.

Ultimately Osborne’s claim that contemporary art is either anywhere or not at all – that its distributive logic, its mediated singularization of constituted, deconstituted, and reconstituted universals, are singular temporal instantiations of structures that are socio-spatially conditioned and conceptual in their relations – is dependent on the contradictory character expressed in art’s newfound coexistence with the culture industry within a transnational art-space, and particularly through the transnational exhibition form. (149-50; 165-7) The postconceptual semantic and institutional structure of this transnational art-space is essential for Osborne because it is by reliving conceptual art’s anti-aesthetic failure – in the condensation and reflection of its critical historical experience – that postconceptual art retrospectively brings a determining dialectic of completeness and incompleteness to the ontology of contemporary art and to this art’s relation to the totality of current art practice. (53)

The ontology of Osborne’s postconceptual contemporary art, which finds its particular autonomy – its production of a space that while autonomous is nevertheless situated in the everyday – in the entropy that carries the auto-destruction of modern art’s categories beyond the literal facticity of their nominalism towards a space where their materialization would appear not as their individuality but as the site of at once multiple materializations, is one that while making the contemporary art-thing anywhere intelligible, nevertheless binds the art-thing to the very particular structure and history of that there as art-space. Particularly important here is Brian O’Doherty’s presentation of the modern art gallery as a ‘white cube’.

The ‘undifferentiated potency’ of its space is the ‘sophisticated convention’ of a culture ‘which has cancelled its values in the name of an abstraction called “freedom”.’ As a result, space is now ‘not just where things happen; things make space happen.’ The space that art-things make happen is the art-space that renders them intelligible as art, wherever it is. (40)

With Osborne, the contemporary art-thing, like romantic philosophy’s fragment, is both inside and outside the space it produces. Its autonomy is in its production of a space which disrupts the everydayness of the everyday it is constructed from. And like the fragment, the unity of this contemporary art-thing is futural, its objectivity is ambiguous, a suspension of ideas in their movement towards becoming an object. (170) Osborne’s art-space then is the exhibition of being as possibility, a project space that is only retrospectively reconciled, never immediately, to its status as a social fact.

In Many ways then Anywhere or Not at All is not an altogether radical departure from post-Kantian aesthetics. The shift it proposes is subtle, more subtle perhaps than Osborne might claim. In privileging the aesthetic as a sort of sensible fabric we deemphasise the sense of art’s autonomy as space production. When an author like Rancière suggests that art’s autonomy is an artistic regime, he leaves unspoken the very role this ‘regime’ has in producing its own intelligible space, its own function as something of a “supra-aesthetic regime of truth.” (44) Taken now to an understanding of contemporaneity, the post-Kantian confusion is understandable. The autonomy of contemporary art cannot be found in its free appearance, because the freedom of contemporary experience is not one of an imminent freedom, but a distributed one, one that can only be retrospectively garnered, not as an unexpected horizon, but as a counter-horizon that does away with any expectation of unexpectedness. (210-1) The contemporary art-thing is defined by an incompleteness it itself sets out, not one it militates against.