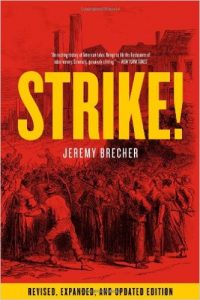 This summer I travelled the USA. As a lover of industrial museums, I made sure to visit New York City’s Tenement Museum and Chicago’s History Museum to learn about workers’ struggles in the Lower East Side and the Haymarket massacre. I even visited Calumet, Michigan’s Coppertown Mining Museum, the site of the Copper County Strike 1913-1914 which Woody Guthrie sung about in 1913 Massacre (Guthrie 1941). Here, 73 people were crushed to death by a stampede after someone – most likely a boss’s thug – falsely shouted ‘fire’ at the striking miners’ Christmas party in the Italian Hall. Despite being an historic site of US labour struggle, the Italian Hall was demolished in 1984 and the museum presents the strike as polarising and dated. Unlike Guthrie they simply label this massacre ‘a disaster’.

So when I opened Jeremy Brecher’s book to read the lines “this neglect of ordinary people’s history is itself part of history” I was overcome with the same feeling I had when reading “the past is told from the point of view of governments, conquerors, diplomats, leaders” (Zinn 2003, 9) in Zinn’s People’s History of the United States when I was 15, or first encountered George Orwell’s memorable quote “He who controls the past controls the future. He who controls the present controls the past” (Orwell 2004). Brecher’s book lifts the “iron curtain” with his history from below by raising to Staughton Lynd’s call that history from below should not only be told from the vantage point of oppressed peoples but challenge mainstream versions of the past on the whole (Lynd 2014, xi).

Brecher details “the times of peak conflict” largely written out of the US history: the Great Upheaval in 1877, the strikes of 1886, the May Day massacre, the general strikes at the end of World War I and II, the Teamster strikes of 1934 and the rank and file rebellions of the 1960s and 70s. His narrative is exciting and accessible as his history focuses on the great battles, the general strikes, the armed confrontations, occupations and episodes which Rosa Luxemburg had labelled the “mass strike process” (Luxemburg n.d.). For this new edition, Brecher has re-written the final three chapters. Here he combines his insights on the state of the contemporary labour movement, how it has sought to renew itself through forming labour-community coalitions and worker centres, with a theoretical exegesis on Rosa Luxemburg’s “The Mass Strike” in times of the Occupy movement.

At its core, Brecher’s book is about the strength and fragility of working class power. He writes:

That power is far different from the power we are familiar with in corporations and other institutions of authority. It is not the power of some people to tell others what to do. It is the power of people directing their own action cooperatively toward common purposes. (4)

For Brecher, working class power emanates from solidarity. According to Brecher, strikes are won or lost insofar as workers are able to build solidarity. This chimes with the original Industrial Workers of the World’s (IWW) conception of workers’ power which labour organiser Joe Hill wrote about in the chorus There’s Power in a Union. It reads: “There is pow’r, there is pow’r in a band of workingmen, when they stand hand in hand” (Hill, 1913)

In an attempt to de-mobilise and undermine working class unity and solidarity, American capital has consistently made use of racism, whether by bringing in Chinese labourers to build the railroads or their use of Black labour. The official trade unions organised in the American Federation of Labor (AFL) did not challenge the racist agenda as they deliberately excluded unskilled African Americans, women and many immigrants (61). On the other hand, Brecher shows how Black workers kick-started the New Orleans general strike (1894) which then spread to white workers. Furthermore, the May Day strike was led by German and Bohemian immigrant workers (55). Interestingly, the book features a bilingual German-English leaflet for the Chicago rally and photos of the New York May Day parade in 1913 featuring posters and signs in Italian, English and Yiddish next to one other (59).

Brecher takes his argument of the power of solidarity further by implicitly arguing that workers’ structural power (Wright 2000) does not suffice to win strikes. During the Great Upheaval in 1877 they refused to handle struck equipment and did not take striking railroad workers’ jobs. A further determining factor is wider support by town and city populations as a strike could only maintain itself as long as the bosses couldn’t summon any strike breakers (15-16). Railroad workers, dock workers or air traffic controllers are defined by their structurally powerful position in the labour market or in the production process of the economy. Their form of power is primarily objective insofar that it does not depend on levels of class consciousness, organisation or workers’ self- activity. It is a potentiality.

Due to the high levels of violence unleashed against striking workers, that potentiality could not often be realised in the past. The American ruling class feared a rebellious population more than foreign invasion. The state and capital relied on company spies to keep workers in check (63), used strike-breakers when necessary (46) and at times even employed the US Army to intervene against its own population (46, 104). Too often, the American Federation of Labor (AFL) remained passive and did not support the strike movements for the eight hour day, for example (47).

However by the beginning of the nineteenth Century capital no longer needed to use violence at all times and instead could introduce new technologies to render workers structurally powerless and subjugate them to its rule (69). That is why workers time again made use of the “power of mayhem”.

Brecher’s book might be a history of defeats, but he displays what Gramsci labelled “optimism of the will” (Gramsci 1929). This allows him to see a continuity between past, present and future movements. One of the additional chapters in this new edition deals with the movements of the early twenty-first Century: the Battle of Seattle, the immigrant rights demonstrations in 2006, the Wisconsin Uprising, and the Occupy movement. Brecher aptly labels these ‘mini-revolts’. These are marked by what Marina Sitrin calls the “power of creativity” in her new Foreword.

While it is necessary to distinguish between halting the production and circulation of capital through strikes and other forms of civil disobedience which symbolically target multinational corporations Brecher rightly sees them part of the same continuum. Thus, he does not accept the false dichotomy which sees workers’ movements and social movements as distinct and separate. Instead, he treats the latter as “mediated expressions” of class struggle (Barker 2013, 47) when he writes: “The mini-revolts […] provide a way to probe the changes taking place in working-class life, organization, and action that will help determine the future of working-class self-organization” (317).

The three workers’ movements discussed in the final chapter point to the future. The strikes in the fast food industry and Chicago’s public schools highlight the diversity of the working class. In both strikes women, Black and ethnic minority workers and immigrants have made up the majority of the striking workforce. The Wisconsin Uprising highlighted new forms of worker organising in old public sector unions. These struggles underlie that working people “may use unions and other established organizations as their means to do so; but in many cases they have had to organize themselves and act outside institutionalized channels.” (3)

Despite the heroic nature of struggles depicted in this book, the US working class is institutionally and organisationally weaker than other labour movements in the Western Hemisphere. The lack of credible social-democratic formation has arguably stifled unions’ institutional power. Today, collective bargaining agreements, union recognition, political representation and rights such as the right to strike have been massively undermined through right to work legislation. Ever fewer numbers of workers are covered by collective bargaining agreements. Too frequently, this loss of institutional power is popularised into “workers don’t have power”. Brecher’s book reminds us that power ultimately lies in collective action and solidarity above all.