Marx & Philosophy Review of BooksReviews‘Axel Honneth: A Critical Theory of the Social’ reviewed by Paul Giladi 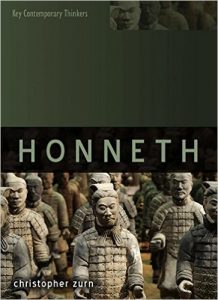 Christopher Zurn’s Axel Honneth aims to provide a helpful and critical overview of the comprehensive and interdisciplinary social philosophy of Axel Honneth. Written in a clear and very accessible style, Zurn does an outstanding job of explicating the complexities of Honneth’s unique brand of Critical Theory from The Struggle for Recognition through Honneth’s important debate with Nancy Fraser in Recognition or Redistribution? to finally Reification and Freedom’s Right.

In the introductory chapter, which serves as an intellectual biography of the third-generation Critical Theorist as well as charting the diverse historical and multi-disciplinary influences on Honneth’s multi-faceted theory of recognition, Zurn emphasises how the Honnethian brand of critical social theory is rooted in contemporary social struggles for recognition and social freedom, such as feminist struggles for anti-patriarchy, struggles for equal LGBT civil rights, and struggles for egalitarian justice. Married to this explicit rejection of the methodology of ideal political philosophy, often regarded as the dominant tradition of political theoretic discourse in the Anglo-American philosophical tradition, is Honneth’s unique research paradigm: the keystone concept of intersubjective recognition to revitalise interdisciplinary social theory with emancipatory intent. Under such an account, critical theory’s normative standards are constructed out of the moral grammar or deep structure of recognition claims. This aims to aid emancipation practically by realising those emancipatory impulses found immanently in present social relations, in order to transcend the current intersubjective framework to realise full human freedom. Consequently, progress is measured in terms of inclusion and individualisation: in other words, societies are better when their recognition order lessens discrimination and exclusion, and acknowledges and promotes the distinctiveness of individuals, what Honneth calls the ‘formal conception of ethical life’. What separates and distinguishes Honneth’s brand of Critical Theory from that of first-generation Critical Theory is that Honneth does not reject capitalism wholesale, because he argues market relations are potential spheres for the realisation of individuals’ social freedom when properly institutionalised.

Zurn’s focus in the second chapter centres on individual struggles for recognition, which Honneth details in his first major work, The Struggle for Recognition. Interpreting this work as a combination of Hegel, G. H. Mead, and object relations psychologist Donald Winnicott, Zurn argues that what unifies these three different influences on Honneth is the underlying claim that the process of gaining recognition intersubjectively is identical to the journey of self-realisation as a social and rational agent. Understood in this way, one can therefore see why exactly early Jena Hegel plays such a prominent role in The Struggle for Recognition – Hegel draws distinctions between three forms of intersubjectivity: love, legal relations, and solidarity. These, in turn, directly correspond to Honneth’s three forms of practical self-understanding, namely self-confidence, self-respect, and self-esteem. Zurn, like Honneth, takes care in distinguishing the technical meaning of self-confidence from the ordinary meaning of self-confidence, where the latter articulation effectively amounts to self-esteem: self-confidence (technically) refers to the basic sense of the stability and continuity of one’s self as a differentiated individual with particular needs and emotions that require intersubjective recognition to be meaningfully constituted. Self-respect comes from being recognised as part of an equal legal community, where being part of a legal community as an equal member under the protection of law affords one social respect. And self-esteem comes from having one’s traits and accomplishments positively recognised either by fellow members of one’s individual community or by other communities of value. The chapter concludes with a critical discussion of various objections to Honneth’s account of individual struggles for recognition: first, that Honneth’s thesis relies on a rose-tinted and anthropologically over-optimistic conception of human interaction; second, that a self-reliant individual would baulk at recognition theory; and third, that it is not clear where recognition theory fits in relation to objectivism and constructivism in meta-ethics. Zurn rejects the first objection on grounds that Honneth does pay significant attention to the dark side of human interaction, and that there is an unsettled state of empirical research on such issues. He counters the second objection by claiming that the self-reliant individualist fails to grasp how we are all intersubjectively vulnerable. Zurn’s response to the third objection is to claim that Honneth’s theory of norms is a realism mediated through social practices and intersubjective relations.

In the third chapter, Zurn discusses Honneth’s account of social struggles for recognition, where Honneth aims to overturn the long-standing Hobbesian model of egoism and the scarcity of resources: mainstream social science tends to focus more on material interests as the motor of social conflict, rather than pay sufficient attention to the way moral reactions to disturbed recognition orders generate conflict. This is not to say that all social conflicts are recognition-based conflicts, but that one cannot reduce all social conflicts to the logic of egoistic struggle. Social analysis, therefore, must remain open to giving important weight to the recognition order of a society and the normative identities at stake, where violations of self-confidence, self-respect, and self-esteem play central roles in social conflict. For Zurn, Honneth’s emphasis on bringing the moral dimension into the foreground of social analysis gives a compelling explanation for Honneth’s evaluation of the normative standards of society: societies are gauged by the degree to which all individuals have equal opportunities for self-realisation afforded to them by the intersubjective societal structures of reciprocal recognition. As such, inclusion and individuation represent formal conditions that can be shown to serve as necessary preconditions for individual and societal flourishing.

Zurn concludes the third chapter by critically engaging with three objections to Honneth’s thesis: first, the charge of mere symbolism; second, that Honneth’s recognition model in fact endorses pernicious groups; and third, that recognition theory endorses group conformism. Zurn rejects the claim that mis/non-recognition is merely a symbolic harm rather than an actual harm, since there is a huge amount of compelling social scientific evidence to suggest mis/non-recognition is a real harm. With regard to the second objection, Zurn rejects the idea that Honneth inadvertently advocates respect for fascists and other evil groups. This is because Honneth makes it especially clear that one is obliged to positively recognise someone/a group only when that person/group inaugurates progressive rather than regressive change. Regarding the worry that under recognition theory identities are transformed from historically contingent collectivities into ‘natural’, timeless, hermetically-sealed group identities which foster illiberal pressures towards conformity against supposedly inauthentic members, Zurn argues that Honneth’s essay on democratic social cooperation clearly shows that he in no way endorses a politics of authentic identity. Not only that, Honneth also espouses a fluid and multidimensional account of group affiliations and identifications in accordance with the framework of Deweyan democracy.

Chapter four focuses on Honneth’s particular contribution to the Rousseau/ Hegel/ Marx/ Nietzsche/ Lukács/ Plessner/ Horkheimer/ Adorno/ Arendt tradition of regarding social philosophy as social diagnosis of social pathologies. Zurn structures the discussion round the four social pathologies that are central to Honneth’s philosophical and social-scientific work: (i) invisibilisation; (ii) instrumental rationalisation; (iii) reification; (iv) organised self-realisation. For Zurn, the main objection to Honneth’s position is that reconstructing the moral infrastructure of recognition from the structures of intersubjectivity to social structures renders an overly rosy and one-sided picture of subjectivity, one which is insensitive to the manifold ways in which the asymmetrical power of social structures is reproduced in and through individuals’ actual subjectivities. While this Butler-Foucault critique of Honneth’s neo-Hegelianism carries significant weight, Zurn argues that Honneth’s position on social pathologies is enlightening and shows how social philosophy as pathology is a distinctive and promising area of research requiring greater positive interaction between Hegelianism and Post-structuralism.

Those outstanding issues for Honneth are dealt with in Freedom’s Right, the focus of chapter six. As a modern re-writing of The Philosophy of Right, Honneth’s central thesis is that our actual social institutions, as practised in contemporary society, are in fact all deeply structured to develop, facilitate, and realise individual freedom above all. For Honneth, while negative and reflexive freedom are important, he conceives of social freedom as the proper and pre-eminent modern model of freedom, as the former are rather limited: free actions require an accommodating social environment from which those actions derive their sense and purpose, and within which those actions fit into a cooperative scheme of social activity. However, while Honneth claims that over the past 300 years of capitalism, markets have enabled social freedom by giving more and more resources that meet needs, and by encouraging greater intersubjectivity in public spheres, Honneth insists that the current neoliberal market sphere is a regressive social development. Furthermore, contemporary democracy falls well short of the standards of radical deliberative democracy or Deweyan democracy. Honneth, then, is neither endorsing the status quo, nor is he offering radical critical theory; rather, his neo-Hegelian critical theory is a social democratic call for correction in order to realise Smith’s moral economism.

Though Zurn is sympathetic to Honneth’s position and convincingly shows that it is a genuine variety of Critical Theory, he makes it clear that he has some strong reservations about Freedom’s Right, namely that Honneth fails to be sufficiently sensitive to social power, and the complex ways in which power relates to the debilitating practices of ideology. This prevents Honneth’s Critical Theory from correctly diagnosing social pathologies and recommending the relevant emancipatory project. However, Zurn does not take this limitation of Honnethian Hegelianism to be a reason to reject the claims of Freedom’s Right. Rather, he sees the Marxian and post-Marxian criticism of Honneth as a call for further work in broadening and diversifying the basic social theory to make it more critical.

In his concluding remarks, Zurn briefly explicates eight challenges for Honneth’s recognition theory post Freedom’s Right. Serving as a powerful broadside to ideal political philosophy, Zurn argues that Honneth must now significantly address questions of global justice and intra-national institutions, since his previous lack of sustained attention to this topic means that ideal political theory has an unfortunate monopoly in this field of enquiry.

Axel Honneth is a very valuable contribution to the literature. It provides an indispensable critical guide to Honneth’s work, one which is a must-read for anyone interested in the topic.