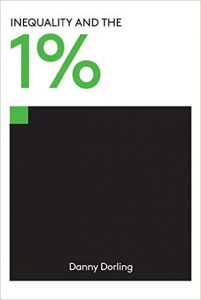 Daniel Dorling
Inequality and the 1%

Can we afford the superrich? This is the question raised by Danny Dorling in his Inequality and the 1%. It arises in strident response to another question asked, seemingly everyday, by governments across the developed world: Can we afford the social programs, education, healthcare provisions, pensions, and care for the disabled, that together compose the welfare state? Instead of merely arguing against such austerity policies on economic or humanitarian grounds, Danny Dorling masterfully demonstrates that the very posing of the latter question is asinine and perverse by showing that the more meaningful question is and ought to be the former. The central hypothesis of the book is thus that over-concentration of wealth in the hands of the superrich is corrosive to society as a whole.

Focusing primarily on Britain and secondarily on the U.S.A. with a healthy amount of international comparison, Dorling makes extensive use of quantitative evidence (often in the form of graphs) coupled with sharp ideological analysis (with the aid of pointed illustrations drawn from popular culture) in order diligently and compellingly to develop a case for the following conclusions:

(a) Wealth inequality is the single most important issue of our time;

(c) Wealth inequality is exacerbated by the wealthiest unduly influencing the political class and the media;

Although the introductory chapter focuses primarily on (a) and (b), the middle chapters on (b) and (c), and the conclusion on (d), the structure of the book does not exactly make discrete arguments for each of these conclusions. Instead, Dorling adopts a mixed structure with the middle chapters focusing on particular themes demonstrating the corrosive effects of inequality, but beginning and ending the book with a broader discussion tying together facts and arguments.

In the first chapter, Dorling sets the stage for his wider argument by drawing out the facts about wealth inequality in the most unequal societies in the world. Most specifically, he claims that the wealth of the 1 per cent is the most important factor in accounting for overall wealth inequality, since ‘there is a strong correlation between the complex Gini coefficient of income inequality […] and the simple measure of how much of total income the best-off 1 per cent receives each year. […] Simply concentrating on the share taken by the 1 per cent is enough. It may even be one of the best measures of inequality to consider in terms of how simple a target it may be for effective social policy.’ (5). Dorling thus goes on to show how the accumulation of wealth by the 1 per cent causes overall inequality. He writes:

Dorling closes the chapter by explicitly repudiating the claim made by the superrich that all benefit from increased prosperity. He also raises the issue of how the superrich create social structures that cement and enhance their financial dominance.

The following three chapters address this question in four different aspects of the lifeworld: childhood, work, wealth, and health. Chapter 2 is entitled ‘Childhood’. It first addresses inequality in education. Dorling not only shows that more equal countries also tend to have more equal education systems, he also seeks to demonstrate how education legitimates inequality in the most unequal societies: ‘We have an education system that is designed to polarise people. It creates an elite that often has little respect for the majority of the population, thinks that it should earn extraordinarily more than everyone else, and defines many of the jobs of others as so contemptible as apparently to justify their living in relative poverty’ (26). According to Dorling, the elites do this by sending their children to expensive private schools and agitating for less taxes and thus less public expenditure for state schools. The result is that the elite buys its way into maintaining ‘an unfair advantage’ (30) for their children. This advantage is unsurprisingly also reflected in an unequal distribution of pocket money (36-40). The chapter closes by tackling the idea that children from wealthier families are endowed with greater natural potential than others, underlining the fact that talk of ‘potential’ is often used as little more than a justification for unequal distribution of wealth.

Chapter 3 focuses on wealth inequality relating to work. In opposition to those who would argue that growing inequality is the mere result of licensing in the professions, Dorling shows that extreme inequality is actually driven by increases in remunerations for those working in the financial sector, as well as executives working in the largest corporations. This is especially true in the U.K. and the U.S.A.. He then seeks to explain the rapacious financial appetite of bankers and CEOs as the product of maladjustment (he considers narcissism, mania, and addiction as potential diagnoses). Looking at the other end of the inequality spectrum, the worst off are those, much maligned in the right-wing press, who cannot find employment. Here Dorling debunks the idea that lower tax rates and high compensation at the very top leads to job creation. Instead, wealth concentration at the top stifles job creation. He writes: ‘Early in 2014 the Equality Trust calculated that an extra 1.75 million living-wage jobs – enough good jobs for all the unemployed young people in Britain – could have been created if the richest one hundred people in Britain had not seen their wealth increase in just one year by a total of £25 billion, and those monies had instead been diverted into employment’ (68). The rest of the chapter provides a detailed account of the destructive effects of Britain’s austerity policies on the job market, and especially on the young, the unemployed, and casual workers.

Chapter 4 delves deeper still into wealth inequality. Early in the chapter, Dorling shows how the richest of the superrich have been getting richer since 2008. The rest of the chapter is reserved for an in-depth discussion of the mentality of this extraordinarily self-preserving class. Continuing to challenge the idea that the top 1 per cent are somehow more intelligent or more talented than the rest of us, Dorling moves from life aspirations to political representation, via an obnoxious Eton entry exam question, to show that the presumed distinction between ‘strivers and shirkers’ is a total nonsense, expressive of mere class segregation rather than of any natural ability or moral quality.

Chapter 5 consists of an exposé of the health and well being related issues arising from drastic wealth inequality. Most interesting in this section of the book is Dorling’s discussion of the shame associated with poverty and the social death associated with abject poverty (138-144). One paragraph in particular stands out:

In 1979 the sociologist Peter Townsend concluded that shame was the core issue of poverty – a position that was echoed by economist Amartya Sen in 1983. The converse of the shame of the poor is the belief of the rich that they deserve their good luck. Such a conviction, however, requires a remarkable lack of empathy. As psychologist Daniel Goleman notes, ‘Reducing the economic gap may be impossible without also addressing the gap in empathy.’ If we look carefully, it is not hard to see attacks on empathy all around us (143).

The concluding chapter of the book delivers the final political blow. Not content with merely depicting present conditions, Dorling demonstrates the historical and geographic absurdity of present levels of inequality in the U.K. and the U.S.A., arguing that change for the better is not only possible via straightforward changes to tax policies, but on its way out. Although Dorling refrains from committing to a preferred causal chain in his prediction for better days (i.e., either as a result of mass political agitation, or renewed economic crisis), he ends the book on a welcome optimistic note.

The result of Dorling’s endeavour is a sophisticated yet highly readable sociology of wealth inequality in 21st century Britain. At times, however, Inequality and the 1% also reads rather in the style of a 19th century political manifesto: depicting the depths of a certain type of injustice only to offer a rallying cry against it. Far from being a weakness, this duality offers a laudable methodological breadth, while anchoring large amounts of complex numerical information in the lived human experience of empathy and its absence at the top of deeply unequal societies.