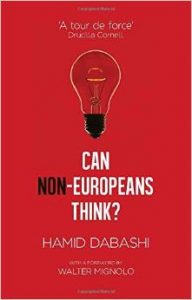 Ariel Shangguan is a PhD candidate in International Politics at Newcastle University. Her research …

Almost forty years since the publication of Orientalism (1978), the seed that Edward Said and his daring imagination has planted in the critical consciousness of an entire generation of intellectuals seems not only to have taken root but also penetrated deeply into every aspect of their moral and political thinking. As a former mentee and lifelong friend of Said’s, Hamid Dabashi in Can Non-Europeans Think? demonstrates why Said and his critique of Orientalism is relevant today more than ever, especially with the epistemic shift of political culture in the Arab World. His words illuminating, utterances compelling, and insights erudite; through this collection of essays Dabashi has shown us how Edward Said has become “the sound with which we sing, the sight with which we see, the aroma of the things we smell” (57). The book is not only in its own right an invaluable contribution to the increasingly important study of the sociology of knowledge, but also a sincere salute to one of the most influential scholars of the twentieth century.

Despite titling the collection “Can Non-Europeans Think?” Dabashi maintains at the very beginning of the book that his task here is not to defend the arguments concerning the question per se. “For, whatever it is worth, it stands on its two feet.” (5) The issue he wants to address, rather, is “whether or not European philosophers can actually read something and learn from it” (5) – thus the introduction: “Can Europeans Read?” The answer he gives is unequivocal: no, they cannot. Europeans cannot read because “they are assimilating what they read back into that snare and into what they already know – and are thus incapable of projecting it forward into something they may not know and yet might be able to learn.” (6)

Dabashi’s argument is undoubtedly provocative – yet not unreasonable. In another book published in 2009, Post-Orientalism, Dabashi argues that the Orientalism Said critiqued was an Orientalism of domination that best corresponded with the history of European colonialism. However – here lies the most prominent difference between his argument and Said’s – there are varieties of Orientalism and Said’s is merely one of them. The Orientalism today, according to Dabashi, is a case of “epistemic endosmosis” (17), in which knowledge production becomes “devoid of agential subjectness, which is the modus operandi of an empire without hegemony” (2009, 213). In the context of post-9/11, for example, there was an aggressive production of public discourse on Muslims and the Middle East. Such public knowledge was manufactured by think tanks to serve the political agenda of the US and once it had served its purpose, it became of no use.

In Can Non-Europeans Think? Dabashi furthers this argument by saying that this disposable knowledge production is related not only to the political imaginary of US imperialism but also to the ubiquitous logic of global capitalism. The capitalist logic results in the commodification of knowledge that is produced on “the model of ‘fast food’, with plastic cups, plastic knives, plastic forks, bad nutrition, false satisfaction” (18). In other words, the Orientalism of today is an Orientalism of cliché, where academic terms and philosophical concepts are fetishized and abused for the sake of journalistic dilettantism, instead of being treated as organic creations that have meanings which need to be addressed and conveyed. It is the example par excellence of Max Weber’s (2001, 124) summary of modern capitalism: “Specialists without spirit, sensualities without heart; this nullity imagines that it has attained a level of civilization never before achieved.” The prevailing capitalist logic helps perpetuate the reigning matrix of knowledge based on Kantian epistemology where the European is always the “knowing” subject and the rest of the world “knowable”. Under such hierarchical architectonics of knowledge production, non-Europeans cannot think – not because they in any way lack the intellectual capacity to do so, but because the Europeans don’t think they can.

The non-Europeans therefore will only be able to think when the Europeans start to be able to read – that is, when they start to accept the fact that “the universe has no centre, no periphery” (59) and that the rest of the world is not just a figment of their imagination but capable of generating their own knowledge. Dabashi accordingly dedicates the second part of the book – Chapter 3 and 4 – to illustrating how the social uprisings in the Arab world have created their very own intellectual organicity that goes beyond the European imagination. He argues that from the Iranian Green Movement to the Arab Spring, what we witnessed was not simply a series of mass protests that swept across countries in North Africa and the Middle East, or a demise of America’s imperial delusions of “the end of history” and “clash of civilisations”; rather, it was the creation of “a new public space … occupied, populated and owned by the people, the real people, ordinary people” (139).

For decades the Middle East has been trapped in the ideology of a false antagonism between Islam and the West. On the right hand there stand the US and “the international community” – that is, NATO, Israel, and the bank accounts of the Arab League – whose side of the story often contains a murderous Islamic tyranny, slaughtering its own citizens who can only be saved via a humanitarian intervention from the West. Democracy is equated with free-market capitalism and individual liberty means economic freedom – and neither will be possible without US aid. Those on the left position themselves as a resistance to such Western-centrism; these are the people who acknowledge the bloody nature of the ruling regime and yet still see it as an effective, if not necessary, counterforce to the globalised imperialism – blinded to the fact that counter or not, there are actual people dying because of it.

If the right represents the outright hypocrisy of the West, then the left is politically illiterate: “A colonised mind is a colonised mind, whether it is occupied by the European right or by the cliché-ridden left: it is an occupied territory, devoid of detail, devoid of substance, devoid of love, devoid of a caring intellect.” (104) Neither the right nor the left is correct on the opposition between Islam and the West; in fact, the dichotomy itself is “the single most creative catalyst in generating an Islamic ideology and then sustaining its political potency” (107). What the people in the Arab world really needed was an ideological tabula rasa – “no model, no template, no blueprint” (147) – and the choice to determine their own future.

For Dabashi, it was the Arab Spring that provided such choice for the people in the Middle East. In her seminal work, On Revolution, Hannah Arendt (1963) explains her preference of the American Revolution to the French Revolution; she argues that the French Revolution was not actually revolutionary because its main aim was to free people from the pressure of famine and dire economic necessity. A truly revolutionary revolution, at least for Arendt, ought to be about creating an atmosphere of public freedom in which every individual can pursue their political engagement. Establishing a new authority by overthrowing the existing one is not being revolutionary; it is being conservative – for essentially nothing entirely new is created. The Arab Spring in this sense was a true revolution – or revolutions, to be more precise – in which one revolution led to another, people no longer limiting themselves to the false choice between tyranny and treachery but instead searching for their very own political ideal.

In the final part of the book, Dabashi then comes back to the question “Can Europeans read?” and explains how this indigenous regime of knowledge has been marginalised, if not patronised, by some of the most widely-read contemporary European philosophers, such as Slavoj Žižek. Whilst for the Algerian intellectual Saidj Mustapha the Arab Spring represents the renewed reading of the world, Žižek and his fellow Hegelian thinkers simply dismiss it as anarchy. Instead of considering the Arab Spring as a way to generate their very own political thinking, they believe that the event “has not yet yielded any clear political or economic project” (260). “This is not just an expression of ignorance”, Dabashi argues, “It is a confusion of the order of things.” (261) Those Arabs did not embrace the European philosophical tradition – they challenged it; the Arab Spring did not indicate the death of party politics – it indicated the rise of a new politics. Yet still, the non-Europeans cannot think. Because they are not operating within the European philosophical spectrum; because they are making their own history, not the Europeans’; because they are not supposed to possess any emancipatory ideas. Because the Europeans cannot read.

Edward Said (2007, 5) in his “On Defiance and Taking of Positions” argues that the role of the intellectual is to be “an opponent of consensus or orthodoxy, particularly at a moment in our society when the authorities of consensus and orthodoxy are so powerful.” Dabashi’s Can Non-Europeans Think? in this sense is not only a powerful critique of contemporary Orientalism, but also the first step to dismantle such a colonial regime of knowledge. To think for oneself, Dabashi has taught us, is the most fundamental way to a political change, whether it is to protect ourselves against mindless tyranny or to be able to understand the world outside of our own. It is also, if I may add, the single defining quality of being human.