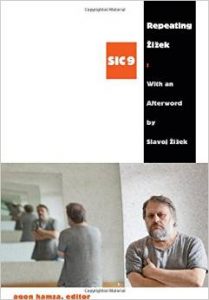 This collection of sixteen essays sets itself two tasks: repeating Žižek in terms of ‘repetition’ as Žižek himself understands and employs the expression and, secondly, offering a formalization of his thought. The first endeavour has the most exciting potential but the attempt to formalize the thought of Žižek is more successful.

Repetition, in the radical sense first given it by Benjamin, is not just a return to a past moment that on a second occasion sees the right decision being made; rather, it is the very collapse of the first choice that creates the conditions for an alternative. October 1917 repeated the French Revolution, not just as an act of redemption for its failure but as a reverberation of ‘the virtuality inherent to the past’ (Žižek’s words from Organs Without Bodies which this book manages to misquote) and for there to be another repetition, for it to fail better, entails a change in a state’s frame of reference. Repetition with a slight but vital difference — for Žižek this is the Hegelian sublation – arises out of something de-centered in the Old that banjaxes what would otherwise be a smooth, ‘natural’ progression; thereby allowing, in Deleuzian fashion, for the emergence of the New. A repetition that goes beyond sublation is not, it would seem, allowed for in Hegel because it involves a destructive rupture in the way things are and not just a dialectical mediation that continues apace. What Hegel didn’t see or follow through in his own philosophy was the shift in perspective that renders the endless process of negation as pure drive, the death drive that insists upon repetition; a repetition that sublation cannot map and enclose. An example is Derrida repeating Hegel with his notion of différance, obliquely managing — not being a positive difference the movement cannot be clearly positioned – to shift the meaning of what Hegel himself says. Similarly, Deleuze – ignoring his own claim to be Hegel’s contrarian – is seen by Žižek as bizarrely repeating the Hegelian contour whereby truth is constituted by the very journey towards it and not by reaching a destination that would be the putative site of truth.

To repeat Žižek, then, is a hugely ambitious undertaking and it cannot be too surprising to find that a series of essays on aspects of the Slovenian’s oeuvre does not produce anything startlingly new. Instead, we see the editor setting out the book’s structure with reference to the topology of the Borromean knot — an image much favoured by late Lacan and equally appealing to Žižek — with the essays divided under headings of philosophy, psychoanalysis and politics. Only, wait a moment, religion is added as a fourth heading and so the Borromean bond has a supplement – which might make you wonder why the figure of a knotted trinity was evoked in the first place.

The first of the essays under the heading of philosophy, written by Adrian Johnston in his customary wordy but lucid prose, establishes the essential background of German idealism and cuts to the heart of Žižek’s probing ontology: how does appearance emerge from reality unless it is implicated in the material, not as a veil hiding an essence but as a part of reality appearing to itself? The split between subject and substance, surely, is necessarily inscribed within being as a part of its intrinsically inconsistent, incoherent not-All constitution. This is a mighty huge query, requiring the balancing of a transcendentally constituted reality – an apperceiving subjectivity in other words – alongside the Real of incompleteness, and with the former arising immanently out of the latter. Throw into this the possibility of a free moral agent with causal propensities plus a Marxist understanding of mind and matter – well, Johnston clears the ground admirably even if he doesn’t attempt to build anything on it. The authors that follow home in on strata of Žižek’s philosophy, skirting around, with varying degrees of illumination, the basic question that Johnston draws attention to.

Catherine Malabou heads up the psychoanalysis section by challenging the Lacanian orthodoxy that trauma is hardwired into the subject and that a neuroscientific approach can only reprise this fact, unable to introduce a new causal power. The traumatized soldier home from the front has already been wounded by a previous shock, not merely the victim of an outside force, but Malabou insists this cannot account for cases of severe neural damage that rewrites the subject, negating any primal trauma and producing an amnesic subject disconnected from their past. Two other contributors claim that Žižek’s psychoanalysis practises a version of ‘wild analysis’, shocking the patient – or the reader – with a burst of sudden diagnosis; paralleled in the social and political world by an event, an act, like Occupy Wall Street, which exposes the inexistence of the big Other. Another essay offers a new periodization of Lacan’s teaching but to what point is not made clear; another, by Fabio Vighi, endeavours through Blue Jasmine to emulate Žižek’s use of movies to illustrate theoretical insights.

This book’s most useful section is the politics one, beginning with Geoff Pfeifer’s contribution that sparkles with connections via Žižek’s employment of Marx’s analysis of the commodity form. Marx has commodities speaking aloud – ‘In the eyes of each other, we are nothing but exchange-values’ – and he grounds their identity as the bearer of value (not the bearer of use) as inseparable from the raison d’être of capitalism. The identity in question is not a state of mind, an ideologically induced illusion, but a social practice – the conduct of our economy – and it determines a form of consciousness for subjects engaged in it. This accounts for the conundrum whereby ‘men make their own history, but they do not make it just as they please; they do not make it under circumstances chosen by themselves, but under circumstances directly encountered, given and transmitted from the past.’ (The Eighteenth Brumaire of Louis Bonaparte). Pfeifer links Žižek’s presentation of Lacan’s symbolic order with an aspect of ‘circumstances’, the social intersubjectivity that anchors what it means to belong to a given community in a particular age. ‘Reality’ is the social reality we experience; the Real is the spectral logic of the commodity form — abstract only in a rarified sense — that determines how we behave and think in social reality. How then do we make our own history if we are so determined? Subjectivity is grounded in material circumstances and because we can become aware of this the circumstances can be changed. Social reality, originally prior to and ‘outside’ of an individual’s existence, occasions an internalization that structures our subjectivity. We de-limit our world by positing a worldview but for this very reason the positing is a reflexive act that is changeable once we become aware that our world is not all there is; that it arises from a set of circumstances in which we find ourselves. This is the necessary foundation of any radical politics and it comes from returning to and repeating not Žižek but Marx.

Agon Hamza follows this essay by an exposition of Žižek’s politics, explaining the nuances behind a position that sometimes espouses ‘doing nothing’ yet which also entangles itself with the pragmatic affair of taking state power. Žižek sees the value of a strong leader but always from a communist perspective that is reconstituted, reinvented, in each historical configuration. This involves locating the antagonisms within society, the dynamic to constant renewal that powers capitalism, and seeing the possibility of breaking with the cycle that re-inscribes the existing order. Hazma gives a brief account of Žižek’s call for a ‘new Master’, a non-alienating mediator, who pushes and disturbs us into a state of freedom where we cannot rely on any master-signifier.

The final section, religion, consists of two essays: one by the author of Žižek and Theology, Adam Kotsko, and the other by Sead Zimeri on Žižek and Islam. The first links Job’s final silence and Christ’s cry of dereliction on the cross as the two faces of Judeo-Christianity’s acceptance of the impotence/disappearance of God, stressing the importance of Paul’s message that enjoyment can be decoupled from a libidinal attachment to the law. Such a disconnect allows for the emergence of the ‘Holy Spirit’, the kind of community that Hazma is pointing to in his account of the ‘new Master’. This is familiar territory but Hazma observes a diminishing interest in theology, evidenced in its marginalization in Less Than Nothing. Zimeri brings an addendum to this sense of a termination by arguing that Islam cannot be accommodated within Žižek’s emancipatory account of Judeo-Christianity. Islam does not follow any such narrative, denying Christ’s crucifixion, remaining tied to ontological fullness and a ‘masculine logic of universality’ that gives a different valence to notions of the big Other. Zimeri ends with a call for a repetition of Žižek that allows for a new understanding of Islam but it remains just a statement of his intent.

Repeating Žižek is more a set of parts than a whole, reflecting the largesse of a thinker who relentlessly repeats himself but who cannot easily be contained within a single collection of essays. The final contribution to this compilation is a piece of psychoanalytic literary criticism by Žižek, based around Shakespeare’s Richard II and Beckett’s Not I, that makes no reference to any of the essays preceding his and which itself is a repetition of what Žižek has said elsewhere (Richard II was looked at as long ago as 2006 in How to Read Lacan). Žižek can safely be left to repeat himself.