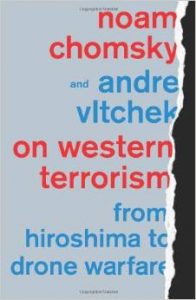 Noam Chomsky and Andre Vltchek
On Western Terrorism: From Hiroshima to Drone Warfare

Margaux Portron is a PhD candidate in political philosophy at Paris 8 University and Queen Mary, …

This book is a series of discussions between Noam Chomsky and Andre Vltchek on the foreign policies of Western countries, namely the United States, Britain and France. It begins with an introduction by Vltchek about how the pair’s relationship came about and why they have decided to write this series of conversations. While Chomsky is a famous linguist and critical philosopher, Vltchek is a writer, filmmaker and investigative journalist. They have developed, according to this introduction, a father-son relationship, which may explain the eulogistic nature of the book – especially when it comes to Chomsky. Indeed, the reader will need to look past the comments glorifying Chomsky, which are spread across the book cover, before being able to appreciate the content. Chomsky is undoubtedly one of the greatest radical thinkers and one needs to give him credit for the humility and curiosity he demonstrates throughout the conversations. Although he is quite knowledgeable, he continuously enquires and does not position himself here as ‘the teacher’ – rather, he positions himself as an equal to Vltchek. It must be stated, however, that this book is not an academic work. A lot of information within is unreferenced. The back cover rightfully presents it as “the perfect introduction to Chomsky’s political thinking” – his career as a linguist is not mentioned in the conversations. Chomsky and Vltchek evoke a lot of cases and readers will need to do their research if they want to understand why these events are relevant to what the authors call “Western terrorism”.

According to the authors, Western terrorism is, on one hand, a type of foreign policy which works not only through terrorist methods in the military field (Hiroshima) but through ideology. It also, on the other hand, construes an image of the ‘other’, or the ‘enemy’ which frames as acceptable what are in fact unlawful attacks on countries (such as the disputed UK report on weapons of mass destruction). The main import of the book is that violence takes widely different forms and is not limited to just a bomb or a machete. For instance, the writers mention, however quickly, how certain universities played a central role in the different US-backed coups in Indonesia or Chile. Here, US-shaped technocracy was a weapon. What is striking is how, before even launching any military command, the US had prepared the future government by training them. The ideological coup preceded the political and military one. By doing so, the US government was assured of having loyal and neoliberal partners in the defeated states. This aspect of colonialism is less known than other CIA practices of violence. Indeed, it does not use violence but can still be viewed as a terror technique which, by consequence, robs countries of their sovereignty. For the reader who would like to know more, Naomi Klein spends time on the subject in The Shock Doctrine: The Rise of Disaster Capitalism – in the end, Western terrorism has much to do with International Relations as well as political economy. Chomsky also raises the essential point of colonialism not necessarily being carried out “across the sea”. The case being argued is that the conquest of US territory by the freshly established democracy can also be viewed as colonial politics: “the conquest of the national territory in the United States is not called imperialism. But that’s a linguistic decision” (162).

The book chapters are interestingly titled and show the thinking process behind the conversation; it starts with an introduction to “The Murderous Legacy of Colonialism” and a necessary framework, “Propaganda and the Media”. However, it then shifts to focus on the geographical areas from “The Soviet Bloc” to “The Middle East and the Arab Spring”. These spaces are not only geographical but also historical: they have been framed and construed by Western representations at particular times, such as ‘Soviet countries’. The book then goes back to less localised topics and ends with “The Decline of US power”, where Vltchek and Chomsky particularly focus on Obama’s administration. Contrary to what the reader might think from the book’s title, drones are actually only evoked in the conclusion – and considered as the embodiment of a new extreme reached in US foreign policy.

Their arguments are convincing and shed the light on less known realities, such as freedom of speech in countries like China and India. Both of them state, for instance, that it is a lot easier to speak of political matters in the former than in the latter. They go on to explain that the representation of China as authoritarian is a construction of the West. The reason is that Western countries want to keep the simplistic image of Cold War era communism as evil: “the way China is being judged in Europe and the U.S. is arrogant, thoroughly patronising” (90). Indeed, both Vltcheck and Chomsky say that they have been able to speak of political matters, on television, in the country. Moreover, they argue that the current protests against the Chinese government are presented by the West as a desire for the free-market – Vltchek points out that people are, on the contrary, actually protesting for Communism or socialism. Turning to India, which maintains a caste system while embracing dehumanizing neoliberalism, they argue that freedom of the press is compromised by corruption. India is not, and has never been, according to Vltchek, the largest democracy in the world. It is instead a capitalist and feudal system. They know these countries very well and are able to argue against the “mainstream” version of History.

It is worthwhile remembering that Chomsky and Vltchek sometimes speak from personal experience here. For better or worse – they do not make their own freedom of speech a general reality for everyone in China – they fail to insist on their privileged status as foreigners and renowned intellectuals. Nevertheless, Vltchek evokes a case where he has been tortured in East Timor in 1996 and it is clear their position as intellectuals does not mean they have only been passive observers of political situations. They are activists and are sometimes exposed to police or military violence. They also talk about the local thinkers they work or have worked with, but sometimes tend to generalise a singular experience to the general thinking of a time. Chomsky explains that in his daughter’s school in the 1960s it was perfectly normal to be taught about the slaughter of Native Americans from the point of view of a boy who wished he had been there as a man to kill and rape. He uses this example to state that this was the way of teaching the History of the US at the time, without providing a source of qualitative or quantitative research besides this – nevertheless significant – anecdote.

Vltchek seems more radical than Chomsky on where Obama comes from in terms of familial background: Vltchek resents the idyllic image Obama has of his childhood in Indonesia at the time of mass killings (1965-1966). As Chomsky points out, Obama was 4 or 5 at the time of the killings, but Vltchek insists that “he was a school age kid, but even they would know. People were disappearing everywhere. […] It would take great discipline not to notice and not to remember” (169). It seems problematic or absurd to prove Obama administration’s policies on Indonesia with childhood memories.

Ultimately, the conversational format of the book makes it easy to read for people who might not be familiar with the History of US foreign policy and with international relations in general. Covering a wide range of events and arguing convincingly for a history which is not Eurocentric or Americano-centric, it is a good entry point to critical International Relations. Chomsky and Vltchek use their empirical knowledge to tell the story of the “un-people”, as George Orwell called them: “the world is divided into people like us, and un-people – everyone else who do not matter. Orwell was talking about a future totalitarian society, but it applies quite well to us” (4).