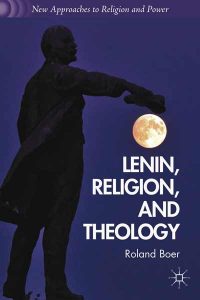 Can Lenin be seen as a revolutionary prophet, a Moses who desired to take the proletariat to the promised land of communism, or a St Augustine who would become eventually become the ‘Doctor of the Church’ of state socialism? For those familiar with Lenin’s writings, his revolutionary optimism, which has a certain messianic ring to it, is hard to miss. Yet, Lenin was also a hard-nosed realist, dismissive of hyper-enthusiastic revolutionaries, and often acerbic to those he dubbed as practicing left-wing infantilism. Lenin, a person who celebrated revolutions as “festivals of the oppressed and exploited” (1977, 125), in a letter to American workers written in August 1918, pragmatically cautioned “We are banking on the inevitability of the world revolutions, but this does not mean that we are such fools as to bank on the revolution inevitably coming on a definite and early date” (ibid., 462). Lenin had faith, but with conditions.

In Lenin, Religion, and Theology, Roland Boer reads the chief protagonist of the Soviet revolution as “principled and theoretically motivated opportunist, or perhaps a creative heretic in Marx’s mold” (8). The image of Lenin not just as an interlocutor of Marx, but also as an interpreter of biblical texts emerges in Boer’s work. Noting how “biblical imagery” underlies several of Lenin’s texts (51), the author argues that in Lenin, there is a radicalization of the stories and the parables of the Gospels (58). Boer has painstakingly gone through the primary works of Lenin – and his contemporaries, comrades and critics – to present Lenin to the reader in a most novel manner. While Boer engages with all the familiar suspects in the field of Marxism and theology – Agamben, Badiou, Benjamin, Jameson, Zizek – he is original in his reading of Lenin. His work can itself be called a creative heresy.

Boer provides a much needed introduction to Anatoly Lunacharsky, the first Soviet Commissar for Enlightenment, whom Boer terms “one of the most fascinating figures of the Russian Revolution” (74) and his work Religion and Socialism. Lunacharsky was skeptical of mechanistic Marxism and believed that Christian theology, though the religion itself might have undergone corruptions, had a certain emancipatory core to it. Lunacharsky saw Jesus as “the scourge of the propertied and the wealthy” and St Paul as a “revolutionary, democratic internationalist” (81). In that tradition, Marx too was a prophetic figure in the line of Christ “full of fiery condemnation of oppression and longing for deliverance” (76).

Many have worked to reconcile the emancipatory content of Christian theology with the critical economic insights that Marxism provides, most notably Brazilian educationist Paulo Freire and San Salvador’s Archbishop Oscar Romero, who was assassinated by right-wing militias for his radical views. The origins of Christian liberation theology could be traced back to St. Francis of Assisi, a 13th Century Italian Catholic priest, who sought to create a Christian Order that would serve the poor. Later, Gerrard Winstanley, an 17th Century Protestant reformer in England and the founder of the Diggers movement, would be one of the precursors to utopian communism. Tolstoy, a Russian Christian anarchist, too shared such similar concerns. It shouldn’t be of surprise that Lenin had much respect for the author of War and Peace but was dismissive about the author of Crime and Punishment. The Slavophilic Christianity of Dostoevsky was too pessimistic for Lenin’s taste. Lunacharsky’s Tolstoy inspired Christian optimism on the other hand was welcomed by Lenin, with qualifications.

Boer is also quick to point out the loophole of the blind optimism of inevitability that lies in the Christian eschatological narrative, something Lenin was also sensitive to despite his great regard for Lunacharsky. Lenin must be read here as an atheist Christian: Christian, in so far as he inherited the radical tradition of liberation theology, atheist, since he opposed the deification of any material or immaterial category, be it the proletariat or the revolution. The Revolution might be a miracle, one of a touching point between “spontaneity and organization, between the unexpected and the expected” (135), yet, without a professional vanguard – the Jesuits of Communism – no revolutionary movement could capture and retain power.

This book is important at a time when matters of religion, especially Islam, are the hottest topic of debate in Western media. While the extreme Right is happy to portray all followers of that religion as potential terrorists, some sections of the Left treat any criticism of Islam or cultural practices of Muslim communities as Islamophobic. Which is the wrong side here? To use Stalinist rhetoric, both right-wing deviation and left-wing deviation are wrong!

Those who argue that there is no separation of the secular and the religious in Islam and condemn it and those who argue the same and approve it are unlikely to remember that the first state to declare itself officially atheist in history happened to be a predominantly ‘Muslim’ country – socialist Albania. Under Enver Hoxha, a rather ‘dogmatic’ Leninist, the state banned religion and religious preaching, shut down mosques, and tried to achieve gender parity in all public services. In practice, Hoxha was the most rabid ‘Islamophobe’ of the previous century. Incidentally, it was precisely those western governments – which are now accused of harboring Islamophobia – that railed against Hoxha for curbing religious freedom for Muslims.

What position then should a Western leftist adopt? To Lenin, a priest or a worker who was a believer had the right to be in the party provided they did not attempt to proselytize using their power as a party member (21). That is, the party would provide space to a believer, but it would not legitimize their beliefs. At a time when the word ‘tolerance’ is much abused by liberal multiculturalists in the West, it is necessary to adopt an attitude of critical solidarity with minority communities. A solidarity that recognizes that they are being marginalized by virtue of prejudices against their faith or ethnicities and that is willing to engage with them in a universalist platform, compulsorily combined with a critical attitude that is willing to challenge the reactionary tendencies within these communities. This Leninism is the need of the hour.