Marx & Philosophy Review of BooksReviews‘Crises of Imagination: Capitalism, Culture and Resistance in a Post-Crash World’ reviewed by Jon Greenaway 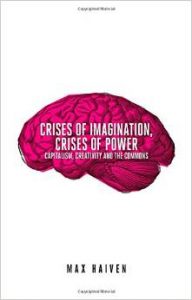 Max Haiven
Crises of Imagination: Capitalism, Culture and Resistance in a Post-Crash World

Jon Greenaway is a PhD student at Manchester Metropolitan University. He writes for a variety of …

To talk of values in modern political discourse seems to entail being confronted with the uncomfortable and seemingly unstoppable infiltration of capitalist economic language into the fields of morality and the ethical. Economic value it would seem has thoroughly subordinated questions of ethics to questions of capital. Politicians replace what would have once been a moral choice (for example to provide a social safety net to the most vulnerable in society) with the language of monetary exploitation – one only need see the rise in political and media rhetoric of “skivers” or benefit cheats to see this ugly discursive move. Policies that are pro-business are seen as good for their concomitant potential to “raise aspiration,” as if aspiration were really a six-figure salary at an investment bank and a healthy pension pot at the end of your career.

Lapsing into necessary generality for a moment, whilst the right sees this fusion of economics with morality as something beneficial and even natural, the left’s own suspicion of a normative moral theory (all too often a source of domination, control and brutal repression) has left it to turn from morality towards politics, all too often abandoning any kind of moral position whatsoever. This split between the political and the moral or, as we might label them in more Marxist terms, the economic and the ideological, creates an entirely false separation. Yet it is within capitalism itself that we might begin to expose this complex intertwined relationship between the moral and the political. As the crises of capitalism mount and become ever more protracted and extreme what is exposed is the paucity of the capitalist imagination. Confronted with the historical evidence of capitalism’s grotesque failures and injustices, too many policy makers are still in thrall to Thatcher’s famous dictum that “there is no alternative.” Capitalism, unable to conceive of anything outside of itself, is suffering from a distinct crisis of the imagination – there is no shortage of “innovation” (that most beloved of buzzwords) but all the activity cannot hide the distinct lack of fresh ideas. Despite all the frantic political work on the surface, neoliberalism is a doctrine drained of life. Coining a rather wonderful neologism, Haiven labels this “necroneoliberalism.” In terms of our modern politics here in the United Kingdom, the ideological political strategy of austerity is pursued as not just an economic necessity but as a specifically moral good. Living within our means, we are told, is not just something we have to do, but something we should do too – for the benefit of our children, regardless of the brutal cost this imposes upon the poorest and the most vulnerable. Rather than reform or recreate itself this lack of capitalist imagination leads capitalism only to increased rapacity, a rapid acceleration of consumption that has led us to our current experience of neo-liberal crisis.

Max Haiven’s invigorating collection of essays (previously published elsewhere and here tied together with an introduction and conclusion) aims at engaging and reimagining the idea of left wing ‘values’ through imagination and the idea of the common weal. With no little ambition, Haiven’s ultimate aim is to ‘sketch what might be called a materialist theory of the imagination.’ (13) Rather than attempt what would be a rather complex and formal schematic theorisation of these issues Haiven deliberately keeps the tone jargon free, positing the essays as a ‘set of exercises of the imagination’ (7) combining his clear interest in Marx with more contemporary theorists, cultural analysis and social theory. Those expecting a full scale and scientific exposition of Marx’s labour theory of value and how it relates to the various forces of neo-liberal capital will be disappointed. On the other hand, those who are seeking a clear articulation of some of the problems we face and who are open to the challenge of rethinking what we really value will find much that is timely and thought provoking.

The essays group around a specific flashpoint or site of capitalist ‘enclosure’ whether that be the financial sector, the modern university, our sense of history, time, and creativity or shared commonality. Capitalism, Haiven argues, does not just learn from critique, but thrives on it, thus constraining our political imagination and capacity for resistance by incorporating ever more within its own boundaries. By returning to these sites, the essays seek to open new ways of thinking through what resistance truly is, as well as challenging us to try to imagine ways of transcending capitalism’s enclosing grasp.

The defenders of the virtues of capitalism tell us, frequently and loudly, that markets are simply ‘egalitarian arenas of exchange’ (3); but through the market our perception of what is truly valuable is warped, and this has affected almost every aspect of modern life. Of all the essays, the section on the university is perhaps the strongest. Here, Haiven’s analysis combines best with his own personal experience in university organising and activism. By drawing on his theoretical and practical links with the Edu-factory collective as well as the theoretical feminist Marxism of Sylvia Federici, Haiven convincingly and forcefully argues that the university has been enclosed by capitalist values becoming no longer a place of productive intellectual labour but a ‘laboratory of discipline and the debt factory.’ (139) Far from being an ivory tower reserved for the intellectual few the modern university has become ‘an almost compulsory stage of life’ (143) with a system set up to create a new class of ‘good citizen workers.’ (145) Couple this with the increasing privatization of the university sphere as businesses become more and more involved, and universities are now thoroughly enclosed by the demands of capital. ‘Instead of being a place to explore ideas and learn about the world … [the university] has become a place where one invests ones time and money (debt usually) in order to better ones chances in life by cultivating credentials and skills that will allow one to compete with one’s peers.’ (146)

This grim picture matches the increasing plethora of voices from across the UK and North America as precariously employed academics (frequently, albeit not exclusively, in the humanities) try to articulate any kind of resistance. In the role of the university as a place of defining social and cultural values Haiven sees it as a ‘key site of struggle over the imagination’ (149) where the surface set up facilitates the reproducing of capitalist social relations but cannot entirely eliminate the undercurrent of radical and critical imagination within the university. We should take hope from this undercurrent as through student occupations of university buildings and protests we see glimpses of the university of the commons, not just an edu-factory but an ‘alternative social space where the radical imagination can flourish.’ (150)

The flourishing of the radical imagination does depend in large part upon our own relationship to, and understanding of another area that faces the same capitalist enclosure – our sense of history; and Haiven positions his essay on the past next to his section on the university. Ideas, concepts or histories that do not easily fit into the kind of ‘breathless neo-Hegelian prognostications’ (155) we expect from neo-liberal historians are all too often discarded. Insightfully, Haiven argues that that ‘we are all too accustomed to reading the flow of history in ways that justify and normalise the status quo’ (157) which has the further effect of making events of resistance – whether that of the Paris Commune, the Haitian rebellion or even the Occupy movement – seem to be anomalous or ‘isolated instances of emotionally driven rebellion.’(158) Confronted with such enclosure, Haiven challenges the reader to redefine what we mean when talking about memory and history. Rather than a closed narrative a more imaginative approach would ‘open up memory as a site of struggle’ (166) affirming what has been achieved whilst at the same time living with an awareness that what still remains ‘is the constant work of reproducing our society differently, in ways that dismantle and contest exploitation and oppression.’ (166) Haiven further illustrates his point with a brief section on the May ’68 protests in France, using Alain Badiou’s notion of ‘the event’ to argue that the radical event is not just disruptive politically or socially but is a place where ‘the sense of time and convention are disrupted and where individuals cooperate on different ground.’ (170) Freed from the enclosure of capitalist history the radical event is where ‘what once was enclosed within the private becomes common.’ This should not be taken as an argument for a kind of radical utopianism, as to do so would simply replace one set of enclosures with another. Rather we are encouraged to see the radical event as one where the past is not done but always in the process of being done by shared communities and radical groups – where almost as a ‘flash of movement caught out of the corner of the eye’ (172) we may see some of humanity’s ‘unrefined cooperative power.’ (171)

In many ways the insights of Crises of Imagination are not new and those who are well versed in their critical and political theory may well find Haiven’s argument lacking in depth. Too often the essays seem to settle for offering encouragement for our current situation rather than advocating a new situation entirely – this is an understandable limitation of the essay form Haiven is working within but a wider theoretical project would seem to be the next logical step for his political theory and activism. Yet rather than advance a particular theoretical agenda Haiven’s writing suggests a deeply humanist sympathy. His writing is powered by a stubborn refusal to despair and a deep seated clinging to hope that the world and society can (and perhaps, should) be significantly different. It is through a clear eyed, yet optimistic reading of how capitalism encloses us and would force us to despair that we might begin to see the possibility for hope. This book, a half-theoretical, half-polemical hybrid aims to provide the reader with the tools to resist despair and fatalism and to equip resistant ‘groups and factions’ with the necessary tools to make ‘radical values a reality.’ (265) Whether Haiven succeeds or not in his attempt to sketch a materialist theory of the imagination is open to some debate – but perhaps a little beside the point. The book’s true aim is to inspire the radical imagination within its readers and to maintain the validity and vitality of imagination in political emancipatory struggle. On both these counts the work is a resounding success – inspiring, thought provoking and ultimately hopeful.