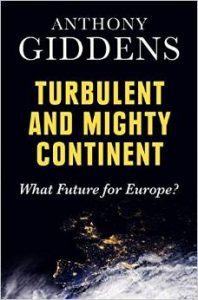 Anthony Giddens
Turbulent and Mighty Continent: What Future for Europe?

In this revised and updated version of the book, which features a discussion of the May 2014 elections to the European Parliament, Giddens furthers the mission of his most recent academic stage: namely, the quest for a new utopian-realist third way in politics whose ultimate goal shall be the successful combination of social equality with economic efficiency. This time and from a pro-European standpoint, the British sociologist engages in a fundamental critique and renewal of the EU project.

Thus, in the Introduction the author unfolds a whole new web of analytical concepts aimed at charting both the evolution of the Union as well as its current struggles. These key diagnostic notions, to which many more prognostic ones will be added in subsequent chapters, are EU1, EU2 and paper Europe. While EU1 is a normative concept (i.e., it designates how things are supposed to be done), EU2 refers to the prevailing de facto (and somewhat more problematic) functioning of the EU, with paper Europe delimiting the ensemble of roadmaps and aspirational planning that hardly ever materialises. From the interaction of these three ideas the picture emerges of a turbulent continent in an urgent need for cost-effective, structural reforms on a wide scale. The EU, Giddens proclaims, ‘must develop an EU3 – a system conferring more dynamic leadership and political legitimacy as well as greater macro-economic stability than exists at present’ (30).

In the first chapter, entitled `The EU as a Community of Fate’, Giddens discusses the possibility of (and the pressing urgency for) an increased political and macroeconomic integration within the EU. On the economic level, he endorses the creation of a banking union and the adoption of a supranational fiscal agreement, only to end up placing the emphasis on mutuality (i.e. ‘a material recognition by the eurozone members of shared financial obligations to one another’ (24)) and the introduction of eurobonds as a means for estabilising the euro while boosting its position as an international reserve currency. Such economic federalism would in turn be dependent upon a lean, pragmatic political federalism and a subsequent democratisation of the union (whose transition would then help defuse the present Eurosceptic populist surge). In this sense, the above political federalism demands a structural reframing of the major EU governing institutions whose corollary would be the consolidation of an enhanced, fast-moving leadership capacity within the union. Based on this, the best strategy in order to conjugate leadership and popular legitimacy would be to implement both a renewed inclusive attempt targeting the creation of a European-wide civil society as well as the direct election of a European president.

The second section, named `Austerity and After’, deals with the interconnection between the concepts of austerity and growth. Flowing credit investment, Gidden notes, necessitates an effective recapitalisation of the banks as well as that sovereign risk be curbed. An additional point is that austerity need not to be thought of as the opposite of growth, nor should growth itself be the EU’s imperative desideratum. Indeed, Giddens endeavours to show, since the contemporary budgetary obstacles are structural, it follows from this that the renewal of demand via economic stimulus ought to be prefaced by a profound change in habits and a large amount of self-discipline (achievable, pace Naomi Klein, via austerity’s shock value). On the other hand, quality and distribution are to be prioritised if the union is to secure inclusive and smart growth. Some further requirements of a feasible economic prosperity are the creation of net new jobs (via a mixture of interventionism and private investment), reindustrialisation (built around the advent of digital technology and the introduction of reshoring into the policy-making domain), the pressing urgency to get Greece out of the dedt spiral and advances in international cooperation (these including the endorsement of the polemic Transatlantic Trade and Investment Partnership (TTIP) together with the suggestion to minimise tax evasion by forcing disclosure in secrecy jurisdictions).

Part three, entitled `No More Social Model?’ witnesses the author’s compelling proposal concerning the transformation of the anachronistic European Social Model (ESM) into a more cost-effective Social Investment State (SIS). The reason is that the ESM is still captive to the classical picture of the welfare state that was born in the aftermath of WWII whereby citizens are treated as passive subjects whose primary need is that of being taken out of poverty. This strategy, however, has proved ineffective in dealing with recent rampant unemployment, homelessness and the exacerbation of the North-South division. In stark opposition with it and following the footsteps of the Nordic countries, the SIS signals the arrival of a pre-emptive welfare state addressing investment just as much as redistribution (along the lines of a contributory principle that is meant to tackle welfare dependency). Its overall ambition is the fostering of human and social capital, thus empowering active citizens (e.g. by allowing them to choose between the services of competing providers) as it enhances their employability.

In `The Cosmopolitan Imperative’ (fourth part), Giddens explores the way in which the emergent nature of the EU’s super-diverse society has deep implications for the European identity and the economy of the Union. With regard to the cultural agenda, Giddens puts forward a number of trenchant objections to the notions of ‘multiculturalism’ and so-called ‘European values’. Instead, he puts forward the concept of interculturalism and points out that the EU requires the construction of a renewed transnational narrative, a fresh discursive space that elicits the interests of its citizens, eventually culminating into further cultural and economic growth.

Giddens then moves on to the fifth section, which is called `Climate Change and Energy’, and where the prominent sociologist discusses the EU’s combined approach to emissions, economic prosperity and resource security. In particular, he contends that the scarce results achieved by the Emissions Trading Systemand the UN process (whose cornerstone is the 20:20:20 strategy) are inversely proportional to their grandiloquence. Based on this observation, he revisits the cost-effectiveness of the green movement (whose conservationism he proposes to supplement with a set of active policies based on an adequate opportunity-risk assessment, human ingenuity and innovation) and the use of renewable energy (which from the perspective of risk evaluation need not be found greener than gas or nuclear, hence his defence of the use of the latter as a transitional form of energy). Last but not least, Giddens argues for the convenience of constructing a pan-European grid in an incremental and localised fashion.

The final part, `The Search for Relevance’, finds the English scholar arguing for the evolution of the EU as a model for a transnational governance system within a globalised context (sovereignty+). To that end, he reiterates his support for a transatlantic partnership and suggests developing a European Army (so as to coordinate the EU’s national armies into integrated leadership and to make its weaponry more relevant vis-à-vis Russia, the Middle East and North Africa, while at the same time setting itself apart from an ambivalent dependence upon America’s military strength).

All in all, Giddens’ revised and updated edition of Turbulent and Mighty Continent offers a delightful combination of persuasive argumentation and fact-based analysis drawing upon the latest studies in the field. The resulting product is a critical, rigorous, engaging and forward-thinking vade mecum of sober discourse and radical thought that will be regarded as a crucial contribution to fixing the (currently under-pragmatic) European Union when it most needs it and on all main fronts (from economy to politics passing through welfare, culture, climate change and international relations). Although Giddens can be said to have slightly over-played the significance of fast-moving technological and demographic changes and to have at times incurred a certain degree of overpragmatism (e.g. the discussion of European immigration or Turkey’s possible membership of the EU), this work is a must for any critical thinker about Europe, not least because of the clarity with which its author makes us cognizant that the main problem of the EU is not just occasionally appearing to be ‘all talk and no walk’. Rather, its main difficulty resides in that most of its current talk is profoundly ill-founded when analysed under the prism of its cost-effectiveness. This work is thus a wake-up call against the kind of cognitive economy that is inherent to both paper Europe and populist politics, since well-intentioned measures and conventional wisdom (e.g. an overgenerous welfare state, multiculturalism, a veneer for international sovereignty, a green culture based on the precautionary principle, austerity-alone/investment-alone measures, a moralistic international diplomacy) are proved over and again in this book to have perpetuated the same problems they once purported to solve.

In conclusion, now more than ever it is time for Europe to resist the pseudo-activism inherent to ideology’s main injunctions: ‘don’t think, just act’ (as Zizek has rightly denounced) and its very opposite (the ‘don’t ask, just think’ of paper Europe). So if you ever feel like thinking before trying to save the EU, this book may end up featuring amongst your most powerful weapons.